When you chat with friends about settling debts or splitting the bill, Facebook doesn’t want you to have to open another app like PayPal or Venmo to send them money. So today it unveiled a new payments feature for Facebook Messenger that lets you connect your Visa or Mastercard debit card and tap a “$” button to send friends money on iOS, Android, and desktop with zero fees. Facebook Messenger payments will roll out first in the U.S. over the coming months.

Rather than lean on a payments company like PayPal to power the feature, Facebook built it from the ground up from its experience processing over 1 million payments a day through its ads and games platforms. Transactions and payment info are encrypted, and Facebook says “These payment systems are kept in a secured environment that is separate from other parts of the Facebook network and that receive additional monitoring and control,” from an anti-fraud team. 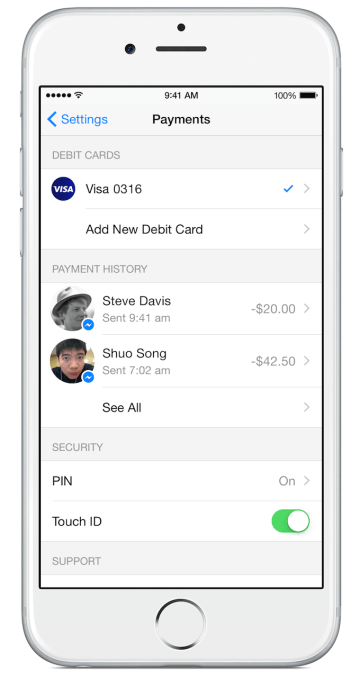 By making payments part of its oft-used messaging service rather than a standalone app, Facebook is looking to edge out dedicated P2P payment competitors like Venmo/PayPal, Google Wallet, and Square Cash, which people open less frequently. That’s the same strategy as the Square Cash-powered Snapcash feature Snapchat launched in November.

We have had a great relationship with Facebook since 2008 and currently work closely together to deliver easy payments on a global scale for its games and ads businesses.
PayPal has always taken a partnership approach to payments and we will continue to work with Facebook and many other companies on new payments experiences that make it easier for people to send and receive money on both the PayPal and Braintree platforms.

When I asked a PayPal spokesperson if the company views Facebook Messenger payments as a “competitor,” they carefully avoided that word but eventually admitted “it does have similar technology and does a similar thing to what Venmo does.” While Venmo makes transfers with most debit cards free, Facebook’s free service will undercut PayPal’s 2.9 percent plus $0.30 fee per transaction from debit cards.

“We’re not building a payments business here,” Facebook’s product manager on the feature Steve Davis tells me. Instead, Davis says the goal is to offer P2P payments for free to make Messenger “more useful, expressive and delightful.” Since Facebook makes so much money on ads, $3.59 billion in Q4, it doesn’t have to monetize payments directly. Facebook just needs to keep people locked into its platform and seeing News Feed ads by making Messenger as helpful as possible.

TechCrunch was the first to report Facebook was building peer-to-peer payments into Messenger back in October when we attained hacked screenshots dug out of Messenger’s code by developer Andrew Aude. Since then, I’ve heard from several sources that Facebook was doing intense internal testing of the feature.

In the meantime, Facebook worked with PayPal, Braintree and Stripe to power auto-fill of billing details for e-commerce checkouts, and built a Buy button for making purchases from the News Feed.

Davis says the product evolved from a different initial incarnation but was cagey about exactly how long Facebook has been working on the feature. He did note that it was well in the works when the company poached PayPal president David Marcus to run its Messenger division.

“We wanted to test this and make sure we had really hit a high bar because money is extremely important.” Now its payments in Messenger is ready for a gradual public rollout stateside. Here’s how it works.

Once users get the feature, they’ll see a “$” button in the Messenger message composer next to the options to send a photo or sticker. When they tap it, Facebook will ask them to enter their debit card info. Users won’t have to fiddle with finding and entering bank account and routing info, making it easier than some alternatives, but they can only use Visa and Mastercard debit cards. Facebook decided against allowing credit cards because they would entail fees and it didn’t want users to get charged if they didn’t understand. 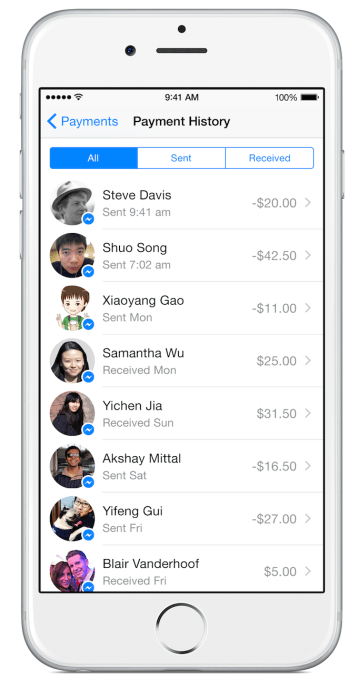 For extra security, users are prompted to set an in-app payments passcode or Apple TouchID fingerprint to confirm transfers, though they can opt out of this extra authentication in the settings. If users already have a debit card on file with Facebook from gaming, ads or donations, they can use that, too.

Once the $ button is tapped, users enter the dollar amount and hit Pay. The money is instantly taken from their debit account and delivered to the recipient’s debit account. Facebook never holds the money, though the receiver’s bank will usually take a few days to make the funds available as is standard. Both users see a confirmation message detailing the transfer status and time.

In case anything looks fishy, Facebook will ask users some extra financial security questions before a transfer goes through. Afterwards, users can see all their previous payments and funds received in the Payments History section of Messenger’s settings.

“It’s obviously not a feature you’re going to use 10 times a day,” say Davis. “But when you do need to send money, this is probably going to be the best way to do it.”

Davis explains that “conversations about money are already happening on Messenger,” as people chat about bar tabs, splitting dinner bills, and sharing the cost of an Uber. “What we want to do is make it easy to finish the conversation in the same place you started. You don’t have to switch to another app,” Davis tells me.

Now the question is whether this is the first step towards Messenger becoming a more full-featured experience. Messenger could follow the trend of monolithic chat apps of Asia like WeChat that let you make payments, e-commerce purchases, hail taxis and more. Messenger is going to have announcements at next week’s f8 developer conference, and we could see more platform ambitions from it then.

While only in the U.S. for now, if Facebook opened up Messenger payments internationally, it could help migrant workers send money home much cheaper than through high-fee remittance services. But for now, Facebook says it just wants to get friend-to-friend payments right in the States. “We’ll consider where to take it after that once we get everything nailed down,” says Davis.

When people’s money is at stake, there’s no room for bugs.