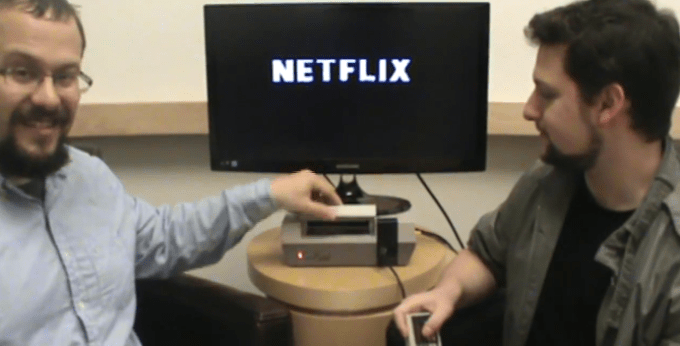 Want to watch Netflix on an NES? Or keep your significant other from blasting through OITNB without you? Or how about being able to jump right back to that hard-to-hear line of dialogue you missed?

They’ve got hacks for that.

Here’s some of the coolest stuff from this latest hackday:

Netflix runs great on most modern consoles, but what would it look like on the pinnacle of 1983 technology that is the original NES? Sure, you’d have to compress movies down to about four colors — and even then, you’d probably only fit about 10 seconds of video on a cartridge. But that wonky Mario-inspired platformer interface makes up for it, right?

“Nope, you went too far. We’re way past it now. Fast forward a bit.”

Aaaand you just missed the most important line in the whole movie.

The SayWhaaat project lets you rewind line-by-line, all based on subtitles. I want this right now.

You know that “Two-man rule” they use to prevent accidental nuclear launches? Imagine that, but for Netflix shows.

Alas, the vast majority of Netflix’s hackday stuff never sees the light of day outside of the hackathon (that would require Netflix doing something new and public-facing that isn’t just changing the UI for the zillionth time) — so don’t expect any of this stuff to pop up on your account anytime soon.

Want more awesome Netflix pet projects? Check out this Netflix/Fitbit double-hitter from last year — it tries to determine when you’ve fallen asleep in front of the TV, and rewinds/pauses your movie at that exact spot.