Pebble announced Pebble Time last week, the next-generation version of its Pebble smartwatch, and today it’s revealing another new product: Pebble Time Steel. This is the stainless steel version of the Pebble Time, boasting the same interface and software, but in a machined metal case that comes in silver, gold and black finishes, and that also manages to add three days to maximum battery life, bringing Pebble Time Steel’s total potential duration to ten days on a single charge, which beats the rest of the smartwatch pack by a considerable margin.

Pebble Time Steel has some similarities design-wise to the original Pebble Steel, as well as the same basic shape as the Pebble Time. It has the same water resistance, built-in mic and color e-paper display, but Pebble says it’s aimed at the professional crowd, rather than the more sporty, everyday look it says it created for the original Pebble Time. And while the new design doesn’t offer any additional sensors on top of the original, Pebble is also announcing a unique modular hardware accessory system for both Pebble Time and Pebble Time Steel called ‘Smartstraps,’ which allows third-party developers to build smart add-ons to both watches in the form of watchband-based enhancements. 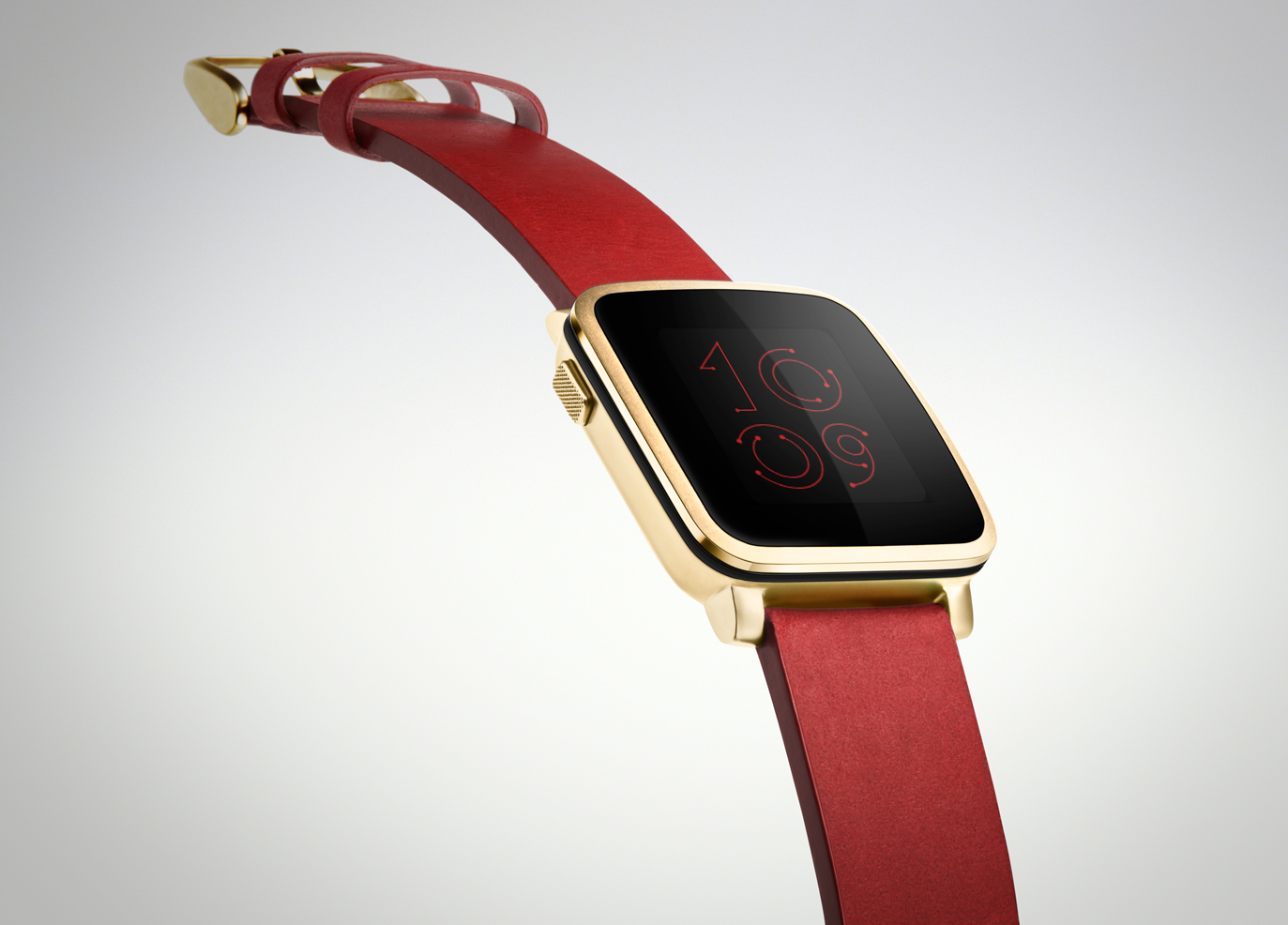 The Pebble Smartband system is an open hardware platform, which lets hardware makers use a port on the back of the watch combined with the quick release band tech Pebble employs to add features to the watch via sensors, electronics, and even batteries built into swappable straps. You could add a heart rate monitor, for instance, or a GPS chip for improved run tracking and fitness powers; a spare battery to bump up the life of the Pebble to multiple weeks; or environmental sensors to tell you about air quality and temperature. 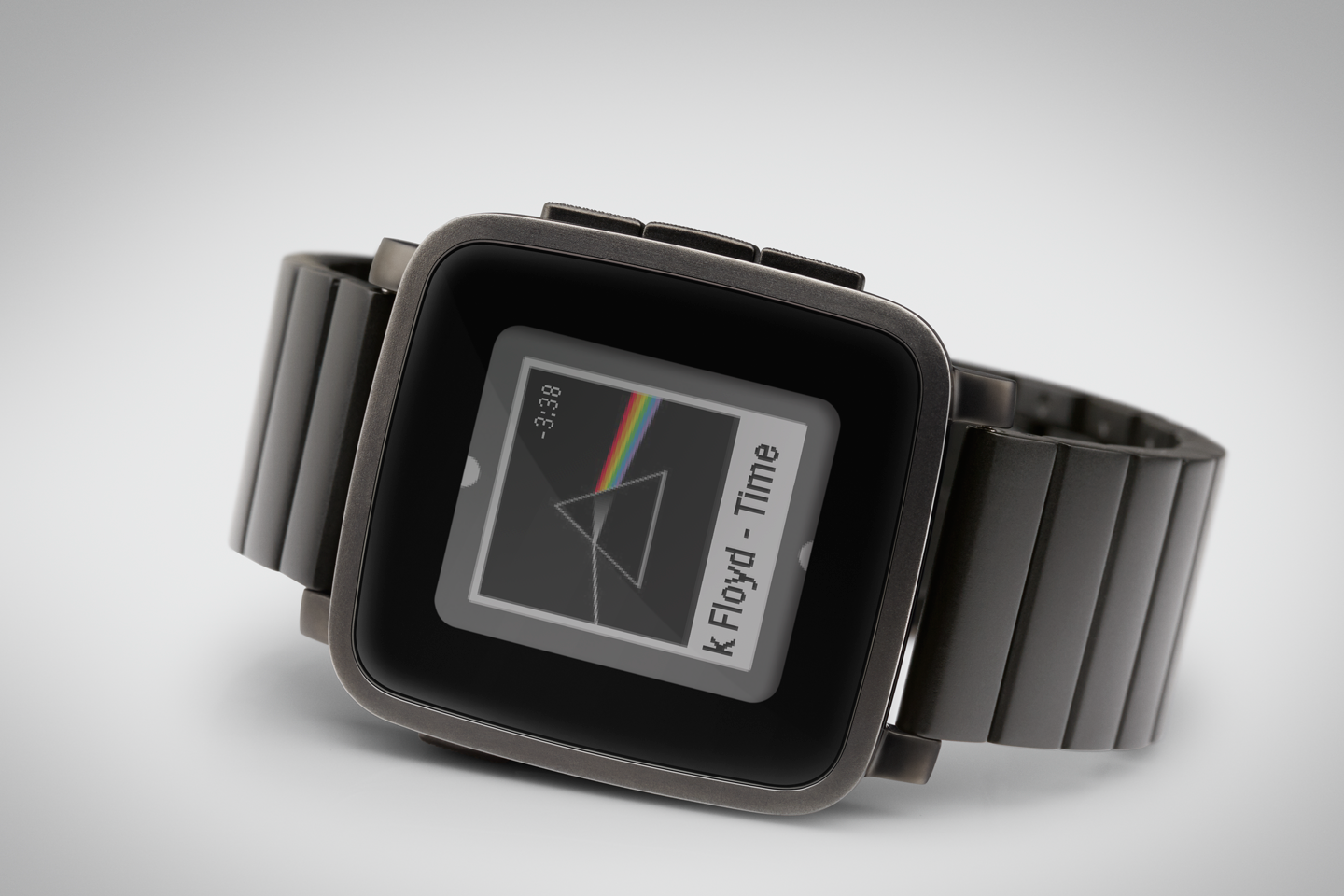 While Pebble has raised over $12 million on Kickstarter to date, with over 54,500 backers having pre-ordered around 65,700 smartwatches thus far, the ultimate pool size for accessory makers to sell too is still probably going to be quite small, relatively speaking, with higher expertise and more complicated manufacturing required than when you’re putting together a simple, old-fashioned leather strap, for instance. Still, there’s definitely an intensely engaged fanbase for Pebble, and modular additional gadgets would likely do well with Pebble’s core user demographics. 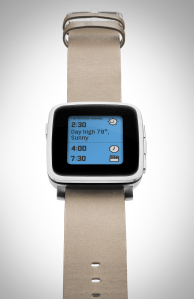 Modularity via smartstraps can also help future-proof the Pebble Time to a degree, letting developers build more advanced features into the watch as the necessary hardware becomes available and affordable. I’d still like to see Pebble itself spearhead development of this system, while also keeping it open to third-parties, but perhaps that’s the tack they’ll end up taking depending on public response and developer interest, anyway. Regardless, adding smartband support is a great way for Pebble to speak to its core community of hobbyists, tinkerers and technophiles, which is the best strategy as it seeks to compete with the likes of the upcoming Apple Watch.

The Pebble Time Steel will retail for $299 (still staying just shy of that $349 starting price for Apple Watch, you’ll notice) and will be available to early Kickstarter backers for $249. Existing backers can choose to upgrade to the Pebble Time Steel without losing their spot in the queue, but they’ll have to wait a bit longer for their reward – Pebble Time Steel starts shipping in July, instead of May for the first crop of standard Pebble Time devices, and June for the current backer group.