That’s according to Sachin Bhatia, co-founder of TrulyMadly, an app that is aiming to take the mobile dating phenomenon fueled by the likes of Tinder and repackage it to fit with India’s social and cultural nuances.

“There is still a stigma around online dating, but our mandate is to make it more cool,” Bhatia explained to TechCrunch in an interview.

Bhatia, who co-founded top online travel site MakeMyTrip, sat down with two friends — MakeMyTrip colleague Rahul Kumar and Hitesh Dhingra, founder of Flipkart owned-Letsbuy — to brainstorm areas that were “ripe for disruption” last year after he exited his company.

The trio looked over a number of areas for new opportunities but were most taken by dating, and, in particular, the lack of services catering to the 18-26 year-old demographic. TrulyMadly was created to fill that void.

Tinder But Not Tinder

Certain elements resemble Tinder — mutual matches can begin private conversations inside the app — but TrulyMadly had adapted to India. Primarily the fact that women don’t feel safe talking to (and potentially meeting with) men who they don’t know via an online service.

“We talked to women who told us that they’d be onboard if we could promise them verified profiles, and the chance to sift through men using some compatibility categories,” he explained.

TrulyMadly’s most obvious difference from Tinder is that it uses trust-based scores to verify its users. You connect your Facebook profile to get started, and also verify yourself via other social networks, your phone number and even offline photo-ID to get more points. The company’s algorithm checks that you are single and active on social networks, and your score thus increases.

That’s an important factor for guys, Bhatia said, because generally speaking the higher their trust score, the more matches and likes they can attract from girls. The process, of course, also provides women with greater peace-of-mind about their potential matches. 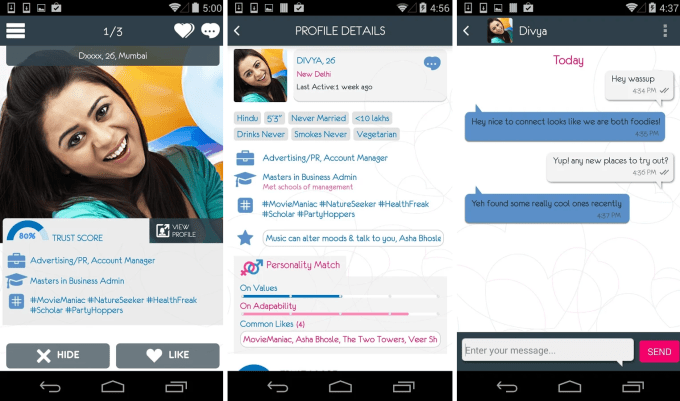 Tinder puts a lot of focus on location, but TrulyMadly instead looks to compatibility quizzes and scoring.

“We’re not location specific because this works better from an Indian context,” Bhatia said, “People in smaller towns often want to meet and date people who are in bigger towns, while the pool of potential dates in small towns is limited.”

The company was founded last year, initially with an online site only before the founding trio realized the need for mobile apps. An Android shipped first, in August, and the iOS version followed last month.

Bhatia explained that Android was first because it has the most scale in India. While he doesn’t except iOS downloads to catch up, he added that the Apple platform was a priority because it is used by early-adopters and influencers who can help get word of the service out.

An app for Windows Phone is expected to ship in the next month or so.

TrulyMadly has reached 200,000 downloads so far, and around a third of its users are female. The startup has just announced a $5.6 million Series A round that Bhatia hopes will take it to the next level, and more specifically 3.5 million downloads by the end of the year.

Helion Venture Partners led the round, with participation from Kae Capital, which Bhatia said should give the company 18 months of runway. Right now, it is not making money, but there are plans to introduce ‘premium’ services, which might include paid-for stickers, location-based services for finding matches nearby, and the ability to view more than 10 profiles per day — that’s the current maximum right now.

Bhatia said that active users — so not all users — are currently using the service for around 40 minutes each day. Often, however, once they are matched with a partner, both parties then take the conversation to Facebook or WhatsApp, India’s top messaging app. In response, TrulyMadly is preparing to add more to its in-app messaging feature — including compatibility quizzes and ice-breaker intros — as it bids to keep users engaged inside its ecosystem.

Growth so far been organic, according to Bhatia, and part of the funding will go towards creating new dating/relationship content for third-party social networks (like YouTube and Instagram) to attract new users. Bhatia said that, in the future, TrulyMadly may also create content that lives exclusively inside its service in order to sharpen its appeal.