Livestream is planning to make it even easier and more affordable to (you guessed it) live-stream video with the launch of a new product called the Broadcaster Mini.

The Mini is part of a two-pronged refresh of the Broadcaster, which launched about three years ago and allows customers to live-stream from any camera. Co-founder and CEO Max Haot told me the Broadcaster is a good entry point, allowing you to just buy a “prosumer” camera and start streaming.

The upcoming Broadcaster Pro will replace the existing device, while the Broadcaster Mini is smaller and cheaper — about one-third the size of the original (it’s 73mm by 51mm by 25.5mm, if you want to be exact), and only costs $295, compared to the original Broadcaster’s price of $495. At the same time, it can still stream 1080p video.

Haot demonstrated the Mini for me last week, connecting it to a camera through an HDMI cable, then using the company’s free iOS app (also available on Android) as a remote control to find an Internet connection and set up a stream of our interview. Now sure, watching an interview as you conduct it probably isn’t the real use case (for one thing it’s a little distracting), but it was certainly impressive to see the nearly zero lag between the real-world discussion and the online stream. 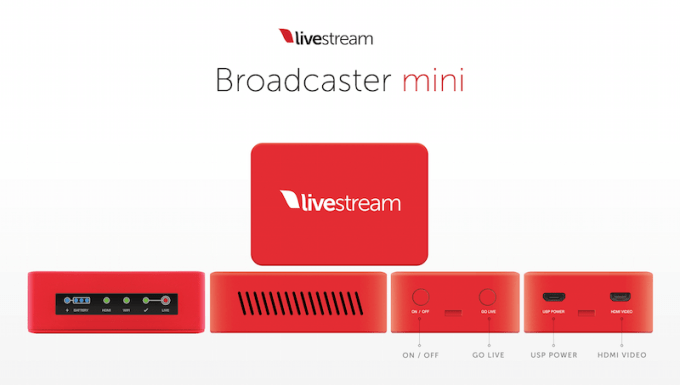 Haot also told me that the Broadcaster is currently used by around 40 percent of Livestream’s active customer base. He said the company doesn’t view the hardware as a big moneymaker — its real business lies in offering additional features like analytics and embedding.

And while live-streaming video may not be the shiny new thing anymore (at least, not unless it involves video games), Livestream says it still streams 300,000 events to 40 million viewers each month.

Haot said the company achieves that by offering “the right tool for the right job.” So even if you don’t have a separate camera, you can live-stream from your computer or mobile device using one of the company’s apps, or you can do something a little more professional with the Broadcaster Pro or Mini, or you can go even further “upstream” with a custom setup.

“We have a very robust roadmap of products,” he added. “If you believe in a world where people want to watch every event live, then everything that’s happened in streaming — it really hasn’t started.”