Nestled between Silicon Valley suburbs with median multi-million dollar home prices, East Palo Alto is a 28,000-person community that can feel like it has been left by the wayside of the current tech boom. One-third of its adult residents don’t have more than a high school diploma and its unemployment rate is about double of what the neighboring communities see.

Some of this is the result of intentional and unjust policies and practices from more than a half-century ago, that I covered in this long piece last month. They were never really acknowledged and East Palo Alto was left out of the transformations that gave way to PC companies in the 1980s and then the Internet in the 1990s and beyond. Despite this, the city has a long history of political organizing.

Now as Facebook’s new Frank Gehry-designed headquarters and slow-growth policies from adjacent Palo Alto continue to put affordability pressures on the city, there’s this question of how to include this historically black, and now largely Latino, community in the current boom.

SamaUSA is trying to rethink workforce development for the digital age in the U.S. It’s an arm of the Sama Group, which was founded by social entrepreneur Leila Janah to connect people in Sub-Saharan African and South Asian communities to basic online work.

Two years ago, they started bringing their program to communities in the United States, starting with San Francisco’s Bayview neighborhood. They have a program that teaches digital skills like social media marketing, how to use platforms like Elance and Odesk and job-hunting basics like doing resumes and cover letters.

They’re starting their first 10-week class targeted at East Palo Alto residents this month, in partnership with JobTrain, a non-profit that’s been in the city’s surrounding San Mateo County for about 50 years.

On the surface, this sounds simple. But half of the program’s applicants don’t own a personal computer or laptop. Almost one-third of their applicants don’t have Internet at home — in Silicon Valley of all places.

“When we started, we couldn’t find anything that was really similar,” said Tess Posner, who is the managing director of SamaUSA.

There are lots of programs that reach out to and train people from structurally disadvantaged communities around the Bay Area, but they have different target demographics. YearUp, for example, trains young people in their teens and twenties who might not have had access to college or four-year universities to intern at tech companies like Yelp and Salesforce. Then there are lots of youth-focused coding projects like East Palo Alto’s Streetcode Academy. 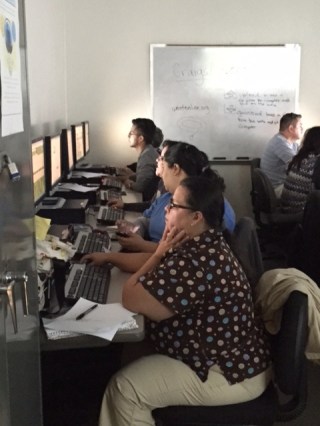 “Without exposure, people don’t know how to take advantage of the opportunities you see across the Bay Area,” said Posner, who worked on workforce development in the East Bay before joining SamaUSA.

At SamaUSA’s other sites in the Bay Area and rural areas across the country, the non-profit says its graduates have gotten online work contracts earning about $11.94 an hour in jobs from administrative assistance to data entry. Posner says their program costs about $3,000 per student and they have a goal of training 25,000 people in online work.

“In order to do that, we have to build something that’s highly scalable,” Posner said. SamaUSA’s pilots have been funded so far by donations from JPMorgan Chase.

“We want to provide that bridge between our students and tech companies that are right there,” Posner said.