“It’s so intense. This city feels like New York now,” Ken Feldman said right as we sat down for coffee in the Mission.

Feldman last lived in San Francisco in the early 1990s, well before the first dot-com bubble. Now he’s back at the height of another boom.

This time he’s pulling together a fundraising campaign to bring the largest art car ever seen to the Burning Man playa — in the form of a Boeing 747. In its first incarnation, it will be more than half a football field long and part of its top will be removed to expose a dancefloor that can house 300 people. 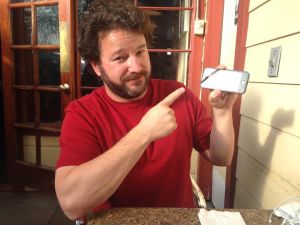 Feldman, a lifelong raconteur who has dabbled in Bitcoin and film and television production, was behind the Charlie the Unicorn art car four years ago. That was a mobile, two-story version of the lethargic, crotchety unicorn who has his kidney stolen after visiting the psychedelic Candy Mountain in a viral 2006 YouTube video.

What is an ‘art car’? Well, at Black Rock City, the 70,000-person temporary city that is erected once a year as the basis of the Burning Man festival, art cars are like the municipal transit system. They’re like parade floats that plod along at 5 miles an hour and are usually bedecked with LEDs or are disguised as enormous prairie houses, sheep, fire-breathing ocotopi, angler fish, or really whatever the human mind can conceive of. You can hop on one, but you have no control over where you will end up.

Given Burning Man’s gift economy where you can’t exchange goods or services for money on the playa, art cars are a labor of love. They can cost tens of thousands of dollars and take months to build and they inevitably fall apart or break down more times than you can count.

As such, Feldman swore last year he would never do one again after Charlie the Unicorn. 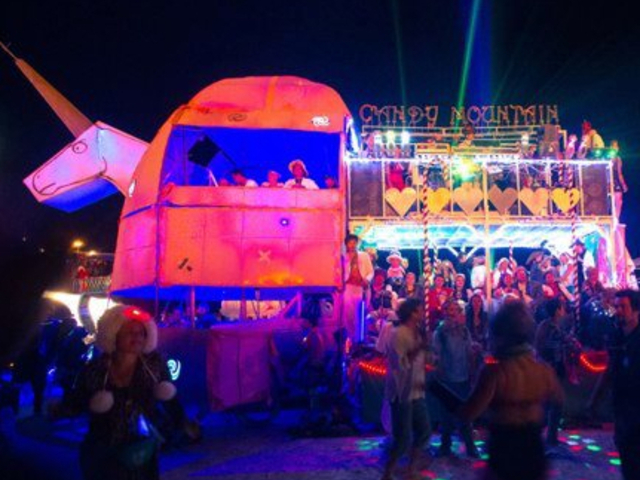 Feldman’s first art car was Charlie the Unicorn, after that viral YouTube video from 2006 where a crotchety unicorn has his kidney stolen while visiting Candy Mountain.

That was until a few friends reminded him of an old idea. Five years ago, while at a party for one of the older music-centric Burning Man camps Opulent Temple, Feldman had been staring at some torpedo-looking bikes that were made of fuel tanks for airplanes.

“I was at looking at them and thinking — wouldn’t it be cool if we brought a plane to Burning Man?”

He sketched out a drawing of a 747 the next day.

But the idea fell to the wayside until a dinner a few months ago when the 747 concept resurfaced again. Feldman started doing some research. He found that there were four aircraft boneyards in the country where decommissioned 747s were sent for scrap metal. One was in the Mojave desert. He searched for it on Google Earth, zoomed in and lo and behold, 747s were parked in the yard.

“I will never ever work on another art car again, except for this project. It’s a once-in-a-lifetime thing. I will never do something like this again,” Feldman said. “This is my Everest.”

And so, with the help of Binary Capital’s Jonathan Teo, a venture investor who led the investment in Snapchat while at General Catalyst and helped source Instagram and Twitter while at Benchmark, they’re putting together a crowdfunding campaign to put Feldman’s idea on the playa.

The campaign isn’t live yet because they have yet to receive approval from Burning Man’s DMV or Department of Mutant Vehicles that they can move forward. They aren’t releasing a final cost for the project, but they estimate they’ll need in the low hundreds of thousands of dollars to complete it.

Teo and Feldman are insistent that they want to go down the crowdfunding route.

“We don’t want it to be — oh, another rich guy bringing a plane to the playa,” Teo said. “That’s a message that we definitely want to avoid.”

That concern comes at a time when Burning Man has faced criticism from longtime festival goers that it’s increasingly becoming an enclave for the rich. While Burning Man co-founder Larry Harvey has said that tech workers have been coming since the early 1990s, the increasing extravagance and complexity of the festival has paralleled the growth of technology industry itself.

Ever since the festival first sold out in 2011 and federal Bureau of Land Management started capping the size of the event, demand has far outstripped supply with some scalped tickets going for close to $1,000 the week before the festival.

But one of the non-profit’s board members, Jim Tananbaum, who runs a $650 million health care growth equity firm called Foresite Capital, came under heavy fire last year for running a luxury turnkey camp called Caravancicle that was criticized in The New York Times, Recode and a widely circulated essay from a “sherpa” who was paid to set up and work at one of these camps.

“There’s this creeping sense of exclusivity at Burning Man. People are doing things like giving out wristbands. I understand why they do it. It’s really expensive to operate these systems, but that’s a slippery slope,” Feldman said. “Part of our goal and mission is to fully embrace the 10 principles of Burning Man. Radical inclusion is very important to us and we’re doing something that people hopefully feel is fun and magnificent.”

He added, “We came up with this term — radically inclusive exclusivity. This means that everything on board is first-class. Everything is VIP, and everybody gets to come on-board and experience it. I don’t care who you are. As long as you’re not acting like an idiot and it’s safe and we’re not maxed out at capacity, come on!”

Feldman says that like any other art car, the 747 will take an army of volunteers and all kinds of smaller contributions from money to time and resources. “24-747 should be our slogan,” he joked.

The project is mechanically complex. Feldman and his team will have to cut the plane into several parts to transport it, which will require precision cutting machines and cranes.

I pointed out that the idea felt more logistically intriguing than it was conceptually interesting. It’s big for the sake of being big. Maybe like a tech boom art equivalent of that diamond encrusted skull that Damien Hirst tried to sell before the 2008 financial crash.

“It is big. There is something to that. It is overwhelming to the senses. Why do they make monuments so big? To overwhelm people,” Feldman said. “I could have chosen an Airbus 380, which is a bigger plane. But I’d take the 747. It’s a beautiful plane. It’s iconic. The 747 is a force of design. It’s elegant and beautiful. You have to think of it not as a vessel, but as a stage.”

Feldman and Teo’s request is happening at a time when there’s some anxiety around how San Francisco’s newfound wealth from the tech boom will filter into the arts.

“The Bay Area is at a turning point in its history. While the old, bohemian art-establishment culture is having a meltdown, the tech-infused Burning Man culture is enjoying an ascendance of money and influence. And it seems that the nouveau riche prefer to spend their money not on art in galleries, but on gadgets, fine dining, and tickets to the world’s best-known postmodern circus. Any hope that new money coming into the Bay would expand the art market is still that — just a hope.”

That complaint has been echoed by others who worry that even older organizations like the San Francisco Ballet and symphony are losing out on the tech boom. But civic arts institutions in American cities like these, not to mention many museums, are themselves the remnants of extreme wealth and patronage from the turn of the century and the Gilded Age.

And Burning Man co-founder Larry Harvey has been fairly critical of the traditional art world, arguing that it increasingly resembles a “professional ghetto,” where works are sold for ever higher prices as investments and are rationalized by an arcane academic discourse. While Burner art may be less intellectually rigorous or stylistically refined than contemporary art, it’s more approachable. Harvey has said that the Burn returns art to its culture-bearing and socially connective purpose.

Tech money is making it into the arts, just maybe in a different way or scale than people imagined. Hence, Big Imagination.