Pinterest is making its visual social network a destination for app downloads, after it announced a partnership with Apple that lets its users download iOS apps directly from its mobile app.

The company said that ‘app Pins’ will be visible within its iOS app — bad news for Android-loving Pinners, this is an iOS exclusive — and will allow users to pin their favorite apps, and also download apps for an iPad or iPhone without leaving the Pinterest app.

That’s significant not only because the App Store is brimming with apps, more than 1.4 million to be precise, which make finding new downloads tough, but because Pinterest is inherently mobile. The company told The New York Times that 75 percent of activity on its service — which has an estimated 70 million monthly users — comes from mobile devices. 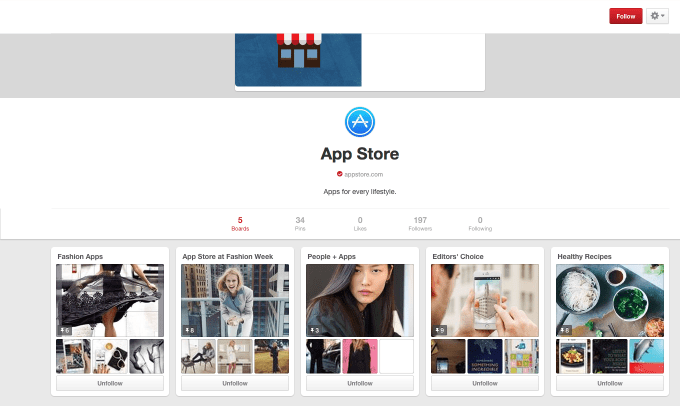 Pinterest made its name with photos, but this tie-in with Apple is another example of it expanding its focus into other media, with the goal of monetization in mind. It branched out to cater to the travel and cooking verticals with dedicated new features, but perhaps the most significant new arrival was ‘promoted’ (aka advertiser) pins which opened to all in December of last year following a beta period.

The U.S. company has raised significant capital from investors — it closed a $200 million Series F round at a $5 billion valuation in May 2014 — but only recently has moved towards monetizing its service. Promoted pins are an obvious source of revenue, and app Pins — though initially for users — could also yield revenue for the company if it decides to open them up to developer and advertiser promotion.

There’s a case for that move already. Facebook app installs have blossomed into a lucrative business for the world’s most popular social network, while Twitter lets developers promote app download links on its service. Pinterest doesn’t enjoy the same scale as either of those companies, but this new opportunity to gain downloads among its loyal user base could become an interesting acquisition channel for developers.