Adobe’s Touch Workspaces are new UI tools for Illustrator and Photoshop that were introduced in the CC 2014 update of those applications, providing a friendly interface for touch devices with high resolution screens, like the Microsoft Surface Pro 3. While the potential audience for these software tweaks may be small, in practice they provide a lot of benefit for any digital artists who’ve found a place for Microsoft’s unique convertible tablets as a portable digital canvas.

The Touch workspace in Illustrator lets you zoom and pan with gestures you’re likely familiar with from ample tablet and smartphone use by now, while also providing a layout that provides easy access to frequently-used tools, It’s not just about putting stuff where it makes sense, though – this actually surfaces stuff you’re more likely to need when drawing with direct pen input, like the Curvature Tool. 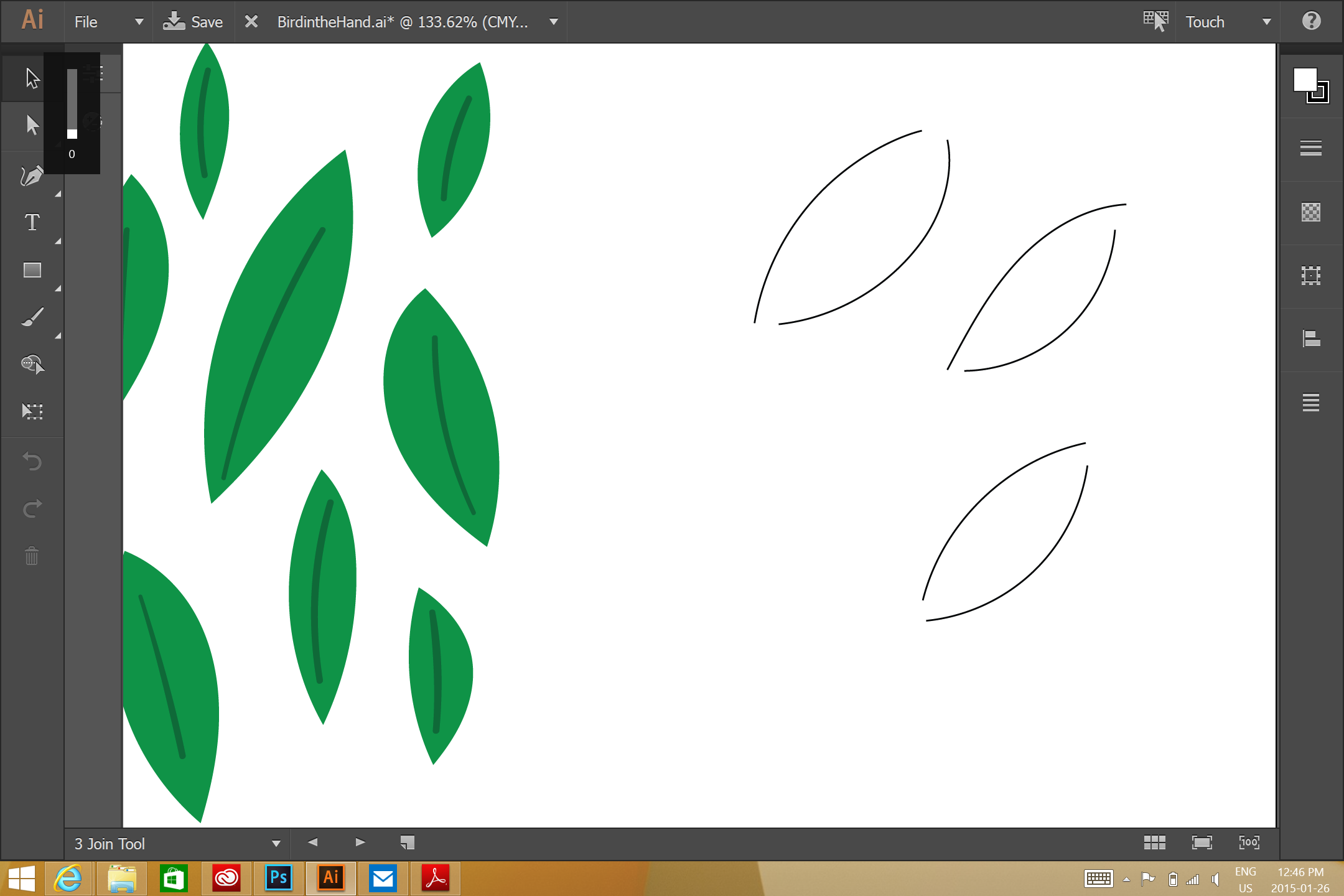 It makes the app great for inking on top of pencil sketches, which is a key use case for Illustrator for anyone doing print or digital magazine illustration or comics. Scrub features with the Join Tool help you smooth out and continue lines that aren’t perfect after sketches, and there’s an easy way to cut away excess line lengthy with the Shape Builder Tool for quickly hashing out reusable vector forms that go beyond the standard preset shapes available in the app by default.

Essentially the Touch Spaces advantage here comes down to Adobe having figured out the best way to create an interface that provides the full power of its desktop creative software in a package that still maintains decent-sized touch targets appropriate both for a stylus or for meatier, more imprecise finger tips. In the end it may streamline things a bit too much for power users, but it’s a focused environment that really works for my general workflow, which mainly involves drawing up quick graphics on occasion for use in posts.

In Photoshop, the experience feels a bit more fleshed out in terms of what it can offer even when users are looking for more advanced functionality. The touch points are again big and easy to hit with your fingers, and the pen input on the Surface Pro 3 works just like paper, as it does in Illustrator, in terms of betraying no visible lag or major input delay/ jumping quirks. 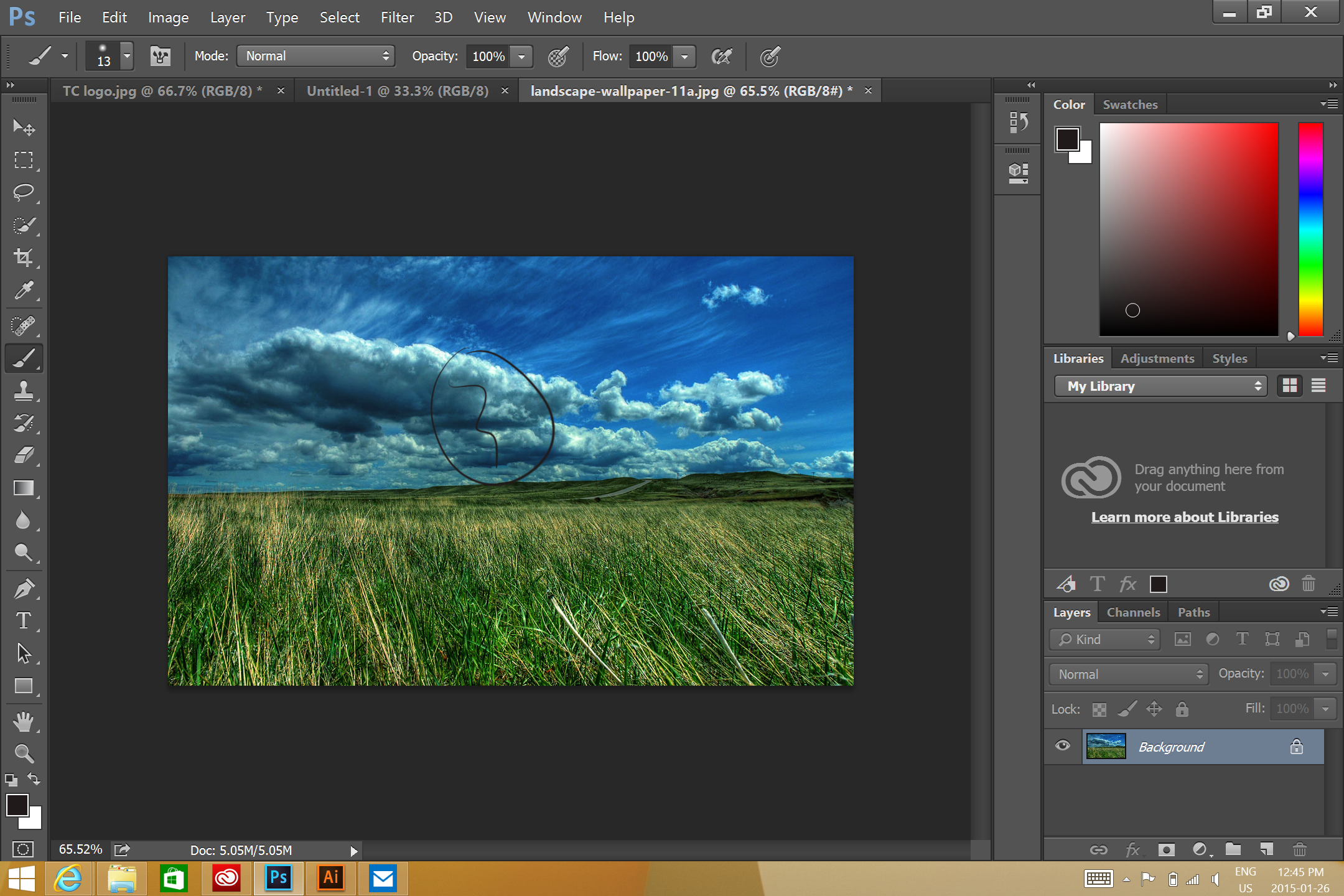 Being able to work directly on the images you want to edit offers up a new level of convenience, especially when paired with a control space that’s optimized for both the Surface’s resolution and touch-based input. Already, using Wacom Cintiq displays makes it much easier to manipulate photos and graphics in just the way you want, but working up to that point, and finding the right tools and commands you need has never been a particularly smooth or pleasant experience up to this point.

The layout gives you access to everything you need as well as optional sidebar expansions and a full, standard menu bar up top, so you won’t have to go hunting too far to locate what you’re after. It’s much closer to the non-touch version of Photoshop than is Illustrator’s Touch Workspace, but it seems like Adobe paid attention to how either application might be used by an artist on a tablet-style device and optimized them differently based on their conclusions.

Being able to open and work in these apps without having to worry about navigating tiny UI elements really adds to the existing value of the Surface Pro 3 as a powerful creative tool – which is a reputation that Microsoft has been wearing for its convertible tablet without any help from Adobe long before now.

There are still some weird issues – the Touch Workspaces in both products seem almost designed by different team, as Illustrator’s won’t work in portrait and seems far less friendly with the Surface Pro 3’s palm rejection tech. Each still feels somewhat experimental, too, with some unexpected variances in performance that can be momentarily frustrating, but that ultimately don’t change the fact that using Touch Workspaces is a lot better than not.

These are features built-in to the current versions of Adobe Photoshop and Illustrator for Creative Cloud subscribers, so they don’t cost anything else if you’re already got that and a Surface Pro 3. It also helps make Microsoft’s tablet a more powerful niche device for the creatives who are slowly but surely beginning to embrace it, meaning if you were already leaning towards picking one up, this should definitely fall in the plus side of your decision-making table.

Adobe is smart to be thinking about how its software works in this type of interface – something tells me the Surface Pro won’t be the last device we see that takes advantage of touch screens combined with pressure sensitivity for an all-around improved digital arts experience.