AdWeek recently reported that Snapchat is asking brands for $750,000 per day to run its new “my story” ads. Some would argue that Snapchat’s unique ad format, engagement tactics, demographics, and immediacy make for an interesting experimental advertising opportunity. Others say that $750,000 is a lot to spend for an advertising experiment that has limited analytics, no targeting, and an inability to show ROI — especially when stacked up against other digital alternatives like Facebook.

If AdWeek’s report is accurate (Snapchat had no comment on the story), it is worth asking the question: is advertising on Snapchat worth the $750,000 price tag? Although Snapchat provides a unique advertising opportunity for brands, the more robust and cost-effective alternatives like Facebook and prime-time television make Snapchat’s high-dollar ticket seem a little too bold.

Why advertise on Snapchat in the first place?

Money aside, there’s a pretty long list of reasons why brands might consider advertising on Snapchat, but the best summary I’ve seen so far comes from a Medium post by Mat Yurow of The New York Times. Yurow identifies five opportunities for Snapchat as an ad platform, three of which I fully support:

Yurow also suggests that immediacy and mobile location data are part of the equation, but I see premium native ad formats, active engagement, and demographics as more important factors right now. Even if the ad is ephemeral, it can still influence purchase decisions at a later date, and “immediacy” is really tied into the whole engagement (No. 2) piece. The mobile location data piece is just not there yet, so it shouldn’t influence an advertiser’s decision to spend yet.

Beyond the points Yurow discusses, there are two even better reasons to advertise on Snapchat:

So you just spent $750,000 to run an ad on Snapchat for 24 hours. What did you get out of it? According to the AdWeek report, the reporting capabilities of Snapchat are “limited.” There are no age breakouts and Snapchat can’t even tell brands how many women versus men saw an ad.

The lack of detailed analytics makes Snapchat exactly like television advertising, except the price tag is even higher than most prime-time television advertising. ESPN’s Monday Night Football is one of the most expensive places for a brand to advertise, and ESPN only asks for an average of $408,000. Last year, Monday Night Football’s viewership averaged 9.6 million households.

Television ads are easy to ignore, so that $408,000 only gets you in front of a portion of the viewers. It’s a similar case with Snapchat: Only a small percentage of users will “opt in” to the ad experience. Snapchat touts more than 100 million monthly active users, but not all of those users would see the ad displayed. They have to choose to watch the ad. In theory, the percentage of “views” or “opens” for television versus Snapchat could be similar, but I’d argue that Snapchat is a more valuable ad impressions mechanism because you know the user is staring at his or her screen while the ad is playing.

Snapchat might offer a more engaging ad unit that doesn’t feel like an imposing television ad, but an unproven experimental ad that costs almost twice as much as a Monday Night Football ad is still a tough sell and a bit of a gamble.

Okay, but the total number of users doesn’t matter that much because you’re hitting the exact demo you want, right? Maybe not. There’s no targeting in Snapchat, so while you might be reaching millennials, you don’t know which millennials are actually seeing the ad. Are they male or female? Are they 18 or are they in their 30s? Do they live in the city or the suburbs? We have no idea. At least with ESPN you have slightly more targeting (you know the viewers like football). The lack of detailed analytics might be the real Achilles heel, and limited targeting doesn’t make the price tag any easier to justify.

Fortunately for advertisers, Snapchat seems to be well aware of the shortcomings of the current ad product. All signs point to Snapchat improving analytics and measurement of ad performance.

What about analytics for brands that want to market on the platform, but avoid a paid push?

As we’ve seen with social media platforms, some brands just want to use new platforms to market themselves for free. From major media outlets like the HuffingtonPost to GrubHub and the Miami Dolphins, tons of brands are using Snapchat organically without paying for ads. So what do these brands get in terms of analytics?

Snapchat will tell you how many people viewed a snap, but the data is gone after 24 hours. The data for each snap within your story briefly appears, but the data eventually expires. Here’s a screenshot of the data Snapchat provides for free to all users. Notice the view count (number next to the eyeball). Each of the snaps within my story have been viewed two times. 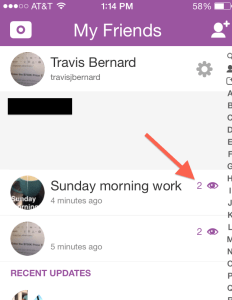 Brands would likely see something similar. If you were a company trying to grab analytics on the post’s performance, you would have to log into your account close to the data’s expiration time. If you miss the window to grab the data, you have no idea how the snap performed. Checking the snaps’ performance close to its expiration date is currently the only way to ensure accurate analytics for Snapchat, and it’s not an ideal setup for anyone creating reports or logging data.

Not only is the data ephemeral, it’s also limited. Beyond “views” there’s nothing else in terms of analytics. There’s no conversion tracking, no click-through data, no share counters. Nothing.

Facebook is one of the best places to advertise because they provide detailed analytics, massive global reach, hyper-targeting (desktop, mobile, and partner sites), real conversion tracking, and awareness that users in your circle might also like a post. You know exactly what you’re getting in return when you run a Facebook ad, and you can reach pretty much anyone on the platform. In fact, way more millennials are using Facebook than Snapchat.

If Facebook is so great, what could you get on the platform for the equivalent of the $750K Snapchat price tag? It’s not easy to get an exact number on Facebook because it has an ad auction system. This means prices fluctuate greatly by the moment, so it’s very tough to estimate how far a dollar would go. To get an estimate, let’s use the TechCrunch Facebook page as an example.

If I, TechCrunch’s head of social media, were to boost a TechCrunch Facebook link post to drive more people to my website, $750,000 behind a Facebook post would get my message served in the news feeds of 50-110 million people (U.S.-based 18-65-year-olds). If I limit the audience to 18-34 year-olds, the potential reach is still an impressive 30-50 million users.Setting up a similar ad but with a directly uploaded video also yields similar results. Again, these numbers can vary greatly depending on the time, but this should give you a rough idea of the potential reach you can get with $750,000 on Facebook.

Facebook also offers social currency in the form of endorsements from friends (so and so also liked this post). Snapchat is one-to-one and can’t do anything like this — yet. With Facebook you get better analytics, more reach, better targeting, and endorsements from friends that also like the update. It’s a better bang for your buck, and you can reach the exact same audience that is using Snapchat.

Still, when advertising on Snapchat, you’re also reaching people on a platform they associate with cool. Sure your Facebook ad gets big reach and polished measurement, but it comes in an uncool context. Being cool might be worth more than anything else.

Do advertisers really need analytics from Snapchat to prove ROI?

Perhaps if retailers get more creative, they might be able to justify a massive ad spend. For example, retailers could offer in-store coupons. Say a snap shows you a promotion for a McDonald’s McRib sandwich, and tells you to take a screenshot and show it to a cashier at your local McDonald’s. Doing so will get you 25 percent off the sandwich. Because the ad is hosted in the story section, it can be replayed, but only for a 24-hour period. Would that drive sales? Absolutely. Would it be ROI-positive for $750,000 ad spend? It depends on the retailer.

Here’s the thing, though: Retailers can do this without paying for a sponsored “our story.” Will it drive as much foot traffic? Maybe not. But it won’t cost much to execute.

Perhaps Snapcash is the key to the ROI equation. Imagine if a user saw an ad on Snapchat, and then paid for the advertised product from within the Snapchat app. If the exchange of money between an advertiser and the user all occurred within Snapchat, the advertiser would have conversion tracking data and the ability to more accurately calculate ROI.

If what’s going on with Snapchat sounds familiar, it’s because it’s exactly what happened with Facebook in its early days. Facebook struggled early, but eventually figured it out. Now Snapchat has to do the same thing.

There’s an opportunity here, but I’m not sure that a super-expensive paid ad is the right way to execute it. When a company is in such an experimental advertising stage, shouldn’t it set a lower bar so it can try more things and see what works best? If you’re paying almost three-quarters of a million dollars to advertise anywhere, shouldn’t you expect more?

If anything, Snapchat seems to be following in the footsteps of Apple, which initially launched its iAd service with a reportedly $1M price tag for minimum spend. Apple’s rate was high, but it seemed to be a much bigger multimedia effort with a lot of input and analytics from Apple. Apple has since reduced that rate to around $50. The idea seems to be start at premium and then work your way down.

Snapchat will eventually work for advertisers. There are just a lot of concerns, and Snapchat needs to get them sorted out before they can transform into a major mobile ad player.