Uber has added a $2 booking fee to uberT rides in NYC, which is charged through the app to your credit card on file, despite the fact that uberT rides still require users to pay their driver the metered fare separately in the city and boroughs. Uber says the fee is being added “on behalf of yellow and boro taxi drivers who utilize the platform,” and then goes on to remind Uber users that the company offers a cheaper alternative in the form of uberX.

Booking fees on uberT in NYC aren’t a new thing – they apply in other markets for uberTAXI rides, too, including Singapore and Chicago, for instance. Uber has defended booking fee additions in other markets as something that helps cover taxi drivers in the case of cancelled calls and other incidentals. 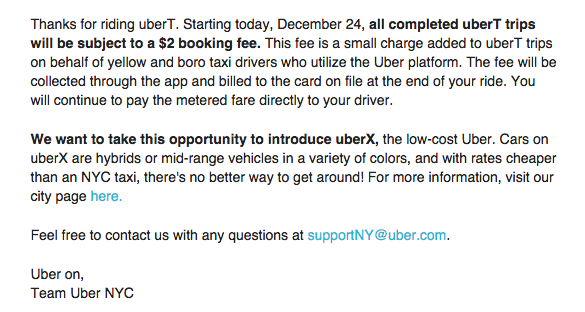 Pushing uberX as an alternative that carries no such fees, and that undercuts the standard taxi rate for a cab in NYC, helps Uber continue to position its own offerings as preferable to traditional livery methods. Uber would likely prefer to rely entirely on its own offerings, leaving traditional cabs, and especially those that don’t use its payments platform (aka the way it makes most of its money) out of the equation.