It’s been different for everyone,” she said. She was upbeat, optimistic, even after finding out her bank account information had been traded on a black market website. She was worried her identity had also leaked. She imagined her private information on some forum somewhere and shuddered. She had a right to be concerned.

She works for Sony Pictures. She said she’s now working in an office on lock-down, a throwback to an earlier time when the Internet wasn’t around.

She requested anonymity but agreed to talk a bit about her day-to-day experience as a Sony Pictures Employee post-hack. She said things were getting back to normal and were, in some ways, more pleasant.

But the thing that bothers her most is the need to depend on old technology to do new work, now.

“We had barely working email and no voicemail so people talked to each other. Some people had to send faxes. They were dragging old printers out of storage to cut checks,” she said. “It was crazy.”

That is what a major corporate security breach sounds like: the squeal of a fax machine and the low murmur of co-workers now required to talk to each other instead of depending on email or instant messages.

Since the Sony Pictures hackers started releasing chunks of private email on November 24, the venerable entertainment company has been in a panic. SPE was formed in a merger between the Sony Corporation and Columbia Pictures that turned heads in 1989 during Japan’s economic boom. It is now an $8 billion business that owns both movie studios and television stations. Favorites from Marvel jostle for attention from Columbia stars and all of these are overseen by a Japanese business culture that is reluctant to “fan the flames with public action,” according to the New York Times. The company has posted protection information for current and former employees on its website. 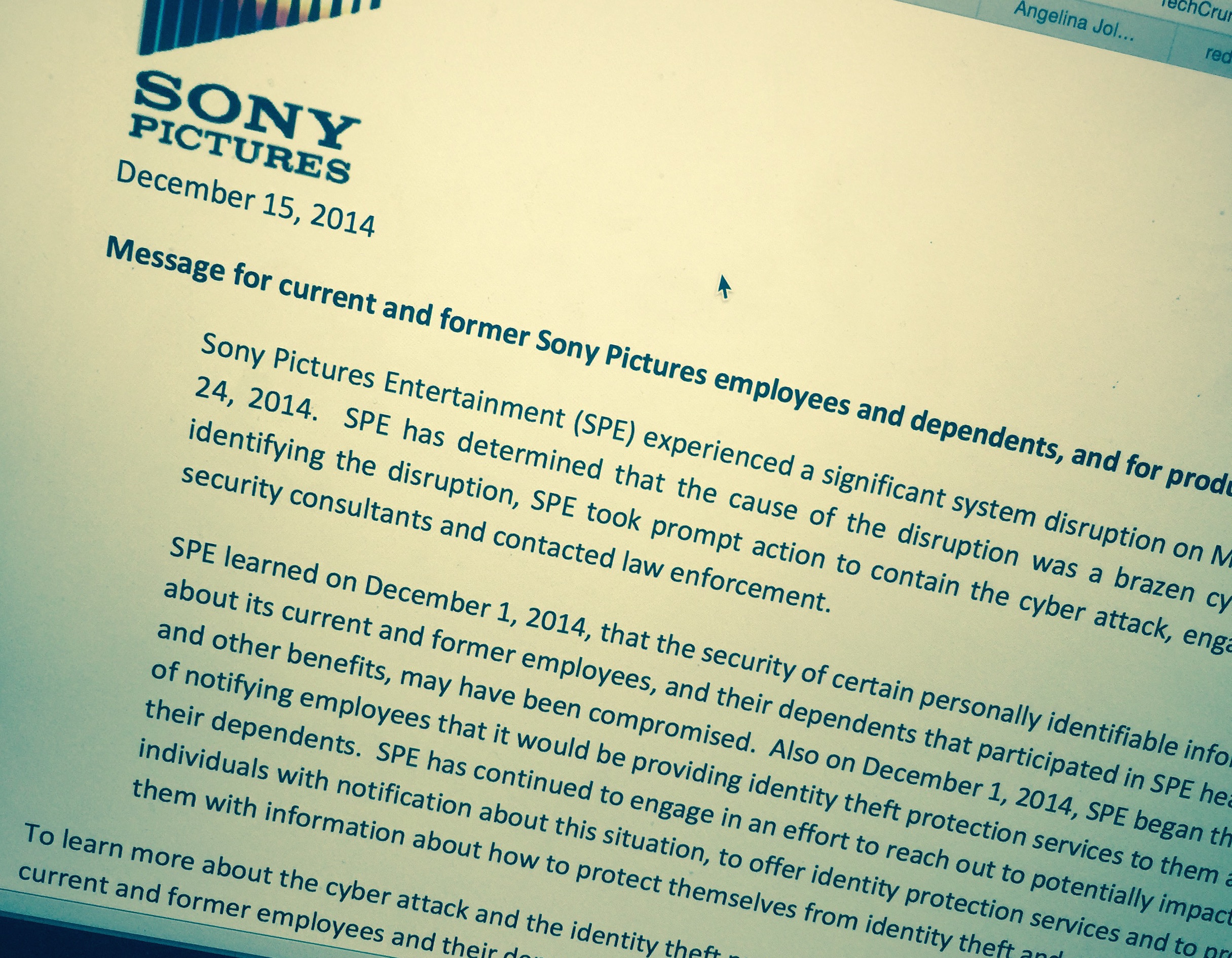 The hacks were far-ranging, hitting everyone from contractors to directors. This meant that high profile stars like Angelina Jolie were reading their boss’ private emails while ground-level employees like our source found their banking information looted.

Internally, SPE is reacting. All employees have been given a year of identity theft protection and many have purchased Lifelock, a popular identity theft prevention system. Others are worried that they will find their credit cards and mortgage statements online. Everyone has changed their passwords on everything, from their Facebook pages to their credit card logins.

“My bank account was hacked [on the day of the first attack,]” said our source who works at SPE offices in Los Angeles. “At first we just thought it was total coincidence.”

Now she suspects someone found something in the email dump that allowed them to access her accounts.

She said that she and her co-workers are closer now. Upper management has been preaching a gospel of face-to-face communication, a weird concept for a 21st century business. “They said that this is really a time to band together and stop staring at your phone and start talking to each other. Everyone has been able to bond in some way and get together. More people are interacting and getting to know different people in different departments,” she said.

Unfortunately, some internal systems weren’t quite up to snuff in the first place, leading to more problems. Our source recalls seeing computers that hadn’t been back up in a decade. That means they are still running old, potentially insecure software on old hardware. “A lot of people aren’t tech-savvy in this business,” she said.

All is not lost.

“We’re mostly a fully-functioning office. We’re going about or daily business. We just got our voicemail back. Everyone is a little calmer now after the initial shock. A couple of people had their computers removed but people using Macs were fine,” she said. She said most work is done on iPads and iPhones. An emergency email system is in place but it does not allow attachments.

“There are certain departments that have printers and computers and some that only have one or two computers for the entire office,” she said. “In some ways we’re living in an office from ten years ago.”

She was quiet a moment. She had to go. After all, she was talking to me on her only office machine, her personal iPhone. And she had work to do.