Facebook is finally getting serious about search. Today it’s challenging Google for finding answers and Twitter for checking real-time chatter with the launch of keyword search. Two years after debuting semantic “My friends who…” search for people, places, and photos on the web, Graph Search is rolling out on iOS in the US along with a new keyword search option for dredging up old News Feed posts by friends.

Product manager Rousseau Kazi tells me Facebook’s personalized search results are focused first on helping people rediscover thoughts, experiences, and memories they saw in feed. Still, queries for “dentist” or “burrito” could surface recommendations from friends that compete with Google results. Meanwhile, a search for “Michael Brown” or “101 traffic” could surface a feed of recent mentions or news articles by friends, similar to Twitter.

There will be no ads on Facebook’s mobile search or any new keyword ads. But since keywords can carry lucrative purchase intent, I’d bet Facebook experiments with ads here eventually to see if they could become real revenue generators. Businesses would surely be willing to pay to insert themselves into results for “restaurant” or “lawyer”. 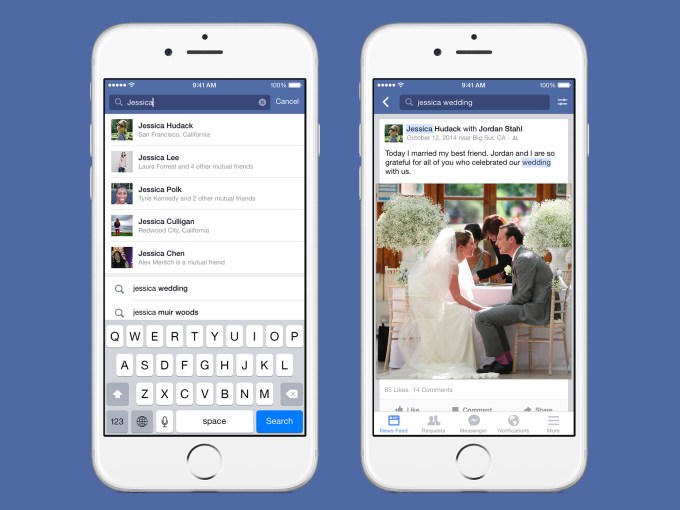 Keyword search is a big step for Facebook because it indexes and unlocks content previously swept away by the rushing feed or buried deep in people’s profiles. “People want an accessible way to find these collective thoughts from the community” Kazi says.

That accessibility changes how “privacy by obscurity” effectively works on Facebook. Your privacy settings aren’t changing, and keyword search will only bring up content shared with you, like posts by friends or that friends commented on, not public posts or ones by Pages. But if a friend wanted to easily find posts where you said you were “drunk”, now they could. Users should take a look at their Timeline or search a few objectionable words with their name and use the in-line privacy selectors in the results to hide anything scandalous.

Kazi tells me eventually, Facebook plans to surface public posts as well, getting more of its un-Googleable walled garden indexed. And if you’re still not sure if Facebook could be a threat to the search giant, theses quotes from Kazi convinced me:

“Facebook has a wealth of information you can’t get anywhere else.”

“Every post is more or less an answer to a questions you didn’t know was being asked.”

When Facebook launched Graph Search in January 2013, Mark Zuckerberg hailed search as the third pillar of its product, alongside News Feed and Timeline. But Graph Search wasn’t quite living up to that title until now.

First, the semantic search engine was complicated. Rather than search with familiar keywords like on Google, you had to use complicated phrases like “My friends of friends who live near San Francisco and Like TechCrunch.” It was useful for finding what friends lived in a city you were visiting, or people who Liked a certain band and might want to come to a concert with you. There were niche use cases for recruiting, dating, or stalking (if you search for “Photos of [Name]” you’ll see photos they hid from their Timeline but didn’t untag), but there wasn’t much day-to-day need for it. 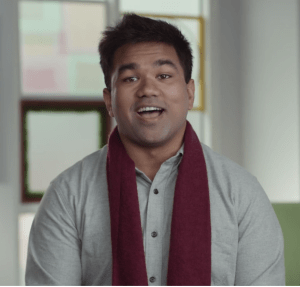 A lot of people didn’t understand the semantic input method, Facebook still hasn’t figured out how to make it work in other languages, and all that typing is clumsy on mobile…or would be theoretically. Facebook said Graph Search would come to mobile in 2013 but is only just getting it out the door today.

Kazi admits that “Phrases are pretty complex”, but defends the slow progress, saying Facebook spent a ton of time with user experience researchers hunched over users brought into its lab to figure out what people wanted. The company also strengthened the core engineering behind Graph Search to make it easier to improve in the future.

Facebook’s new search experience is coming to 100% of desktop and iOS users over the next few days, with a plan for Android once the kinks are worked out. You probably don’t have it just yet, though. You can still use the semantic search, but will also be able to punch in a keyword or several to find feed posts in your network that contain those words. For example, if you were my friend, you could search for “Josh Constine dancing” to see posts of me making a fool of myself.

The results are ranked with a personalization algorithm that combines the prevalence of keywords with a News Feed-style ranking based on how close you are with the author and loads of other signals. Posts show up in a feed design with the keywords highlighted blue, and spelling correction lends a hand. If the results are photos, you can browse them in an immersive photo-viewer interface.

The demo I saw of the new Facebook Search made it look snappy and intuitive. There are some filters for controlling what kinds of posts you see, though a true ‘advanced search’ option would be helpful. Facebook had plenty of opportunities to screw this up, but it looks satisfactory. 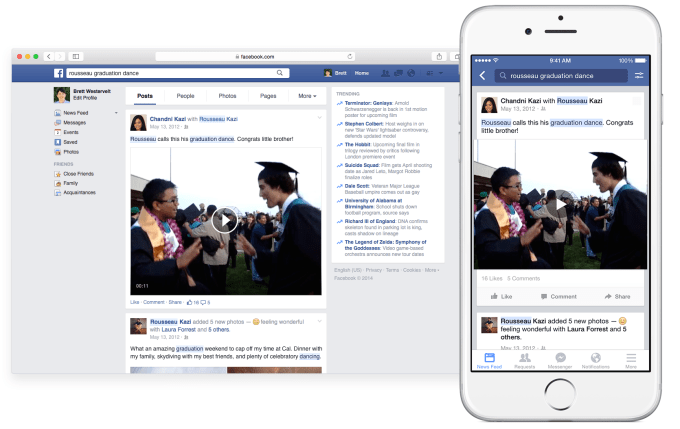 [Update: I’ve now received the rollout on mobile and am impressed by what post search can dig up. Here’s my full hands-on review.

I searched “Dentist” and it returned dozens of posts, including around seven nearby friends posting that they love their dentist, or asking for recommendations and getting comment reels full of them. I never remembered seeing any of these posts, but keyword search surfaced them to help me piggyback on what they know.

A search for “Ferguson” pulled up mentions by friends as recent as 45 minutes ago, and gave me a good look at the articles my friends are sharing about the Michael Brown tragedy. “Fun bar” found me some cool places to drink, but also showed me a fair amount of noise like post of “so fun to see my bestie” tagged at a bar. Overall, though, I was impressed by the utility of Facebook keyword search.] 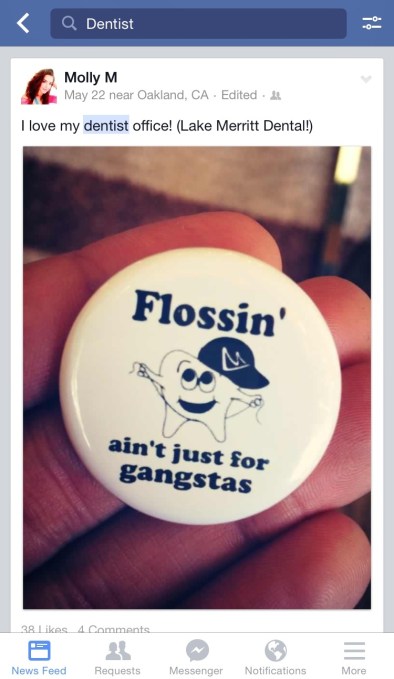 Only posts by friends or that friends have interacted with are eligible to show up in search. That means even if you posting something publicly, random strangers can’t necessarily find them. Some might want their posts to be discoverable like on open Twitter search. But once upon a time when Facebook was mostly just for college kids, people might have been much more cavalier about posting publicly.

Full public post search could lead to people unwittingly ending up embarassed or in the news because someone dug up one of their posts. Open search could drastically change “public” means as a privacy setting in ways people might not be comfortable with. 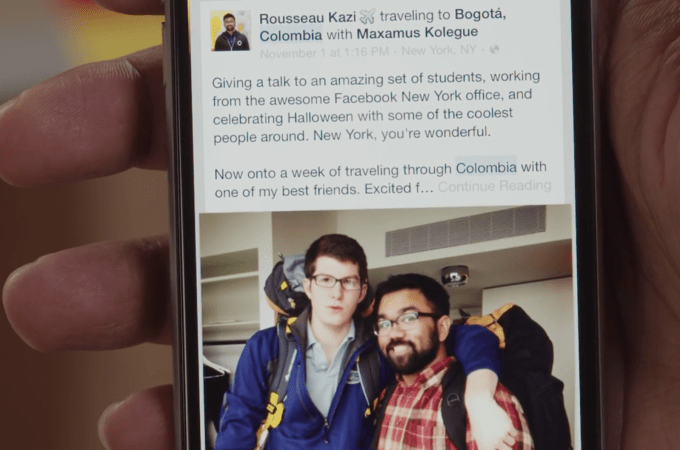 In a wise move, Facebook wil let you change the privacy of your own posts you find with keyword search, so it actually doubles as a privacy tool. Rather than having to scan back through your Timeline month by month, you could just punch in some racy terms and make sure you don’t return anything.

Beyond pulling up memories, keyword search could unlock the purchase intent that makes Google’s ads so valuable. And rather than relying on the feed or hashtags, Facebook could become a place to see what your friends are saying about a major world issue. It’s not the pulse of the whole world like Twitter, but a more intimate look at what your community thinks. Kazi notes “Giving people the abitiy to quickly tap into what friends are saying about a certain world is pretty powerful.”

Both these applications have plenty of room for improvement. It’d be great to see Facebook figure out how to aggregate posts or sentiment so rather than a feed of results, I got more explicit answers. If I search for “fun bar” or “dry cleaner”, Facebook could first tell me which are the most mentioned in my results. Instead of showing me the bar my best friend said was “fun” at the top, it could show the one 10 of my other friends all posted about with synonyms of “fun”. 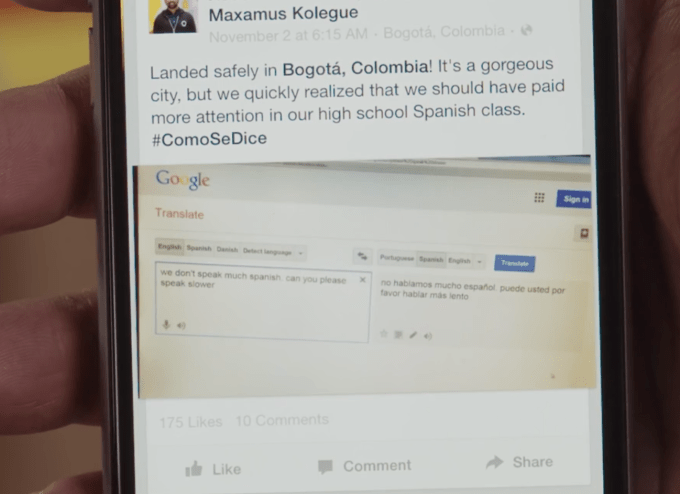 As for taking on Twitter, the option to sort mentions of a keyword in reverse chronological order would be a big help. If I search “New York” right now, I’d like the ability to choose between recent posts by friends of news stories about the Eric Garner protests that shut down the big apple, and more evergreen recommendations of what to do there. Journalists like me and other exceptionally curious people would also love full public post search.

Of course, getting people to actually change their search behavior is harder than it sounds. Facebook Graph Search could already surface businesses you Like or checked-in at, and it didn’t make any noticible dent in Google for local business search. Facebook will need strong educational campaigns to burn the idea that it’s now a search engine into our heads.

Kazi concludes that “The grander search vision is we want to give you the ability to tap into the wisdom of your network and the world. This is one step towards that.”