At its annual shareholder’s meeting this week, Microsoft CEO Satya Nadella and Chairman John Thompson fielded a series of questions from the Reverend Jesse Jackson concerning diversity inside the technology company. The set of queries gave Microsoft a chance to address how it approaches the issue.

The first of Jackson’s questions concerned whether Microsoft would “commit” to releasing diversity data in the future and consider expanding its board with an eye toward hiring “women and people of color for all future board openings.”

He continued, asking if the company would repatriate its huge sums of foreign cash, kept abroad to lower its tax burden. In the words of Jackson, “that money must be somehow sequenced back into the American economy.” Jackson also asked “what partnerships locally and nationally can be designed and expanded to build the pipeline needed to create a 21st-century multiracial inclusive workforce?”

Nadella noted in his initial response that diversity was “core to everything” at his firm, and is “not something that [Microsoft does] on the side.” He followed that remark by directly committing to Jackson’s diversity data release requests, saying that they would be “done by the end of [the] month.”

Nadella recently caused a media firestorm by indicating at a conference that women in technology should not ask for raises, but should instead lean on karma. The executive, following the interview that contained the remark, retracted, and then apologized for the comments.

Addressing the board-related questions, Thompson stated that in the future, “there will be additional opportunities for us to supplement the skill base of our board.” Microsoft’s board has seen turnover in recent months, which isn’t surprising given the recent CEO shakeup at the firm.

Nadella kicked back in, telling Jackson that Microsoft’s work on “equal pay for equal work” which, according to its own numbers, has salaries that are “within a very tight band of .5 percent.”

The CEO went on to detail how Microsoft tracks its diversity makeup internally, and hopes to improve its numbers:

But, the more important thing is, of course, equal opportunity for equal work. And that is something that we are, again, working vigorously as a leadership team. We have a set of metrics that we want to make year-on-year improvements so that we can create those proactive opportunities for everyone, gender, ethnicity, lifestyles.

The second thing that we’re also very focused on is to make sure that we get a diverse talent base into the company and then retain them as they grow inside the company. Again, that is a place where the senior leadership team has monthly meetings to look at the data, reflect on the data, both the quantitative and the qualitative aspects of what it takes to have a diverse workforce thrive is something that we are committed to up and down Microsoft.

And lastly, perhaps most importantly, and the learning for us has been that you have to have a culture of inclusiveness. In fact, the SLT or the leadership team at Microsoft just went through our own unconscious bias training internally, which is one of the things that I want everyone, including me and everyone in the leadership team and every employee at Microsoft to not only go through the training, but to practice it in a daily basis, every decision one makes, the hiring decision, the promotion decision, the stretch assignment decision, because that’s what we do as leaders. And we want to be able to do that with that inclusive culture being front and center to how we drive the organization forward.

We’ll be able to track how well the efforts Nadella listed work. Microsoft has very public diversity information on its website. Here’s the current card for the full company: 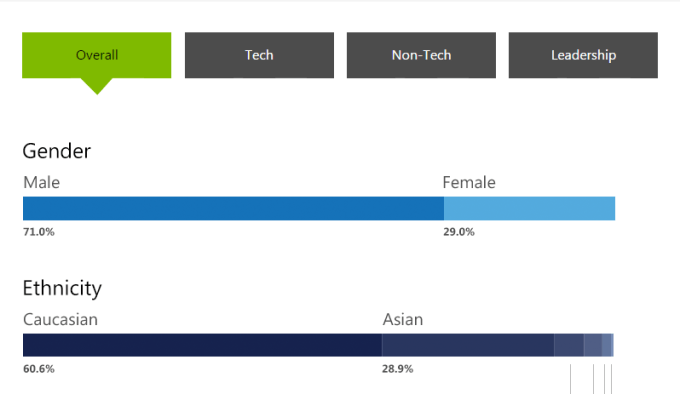 And its technology team: 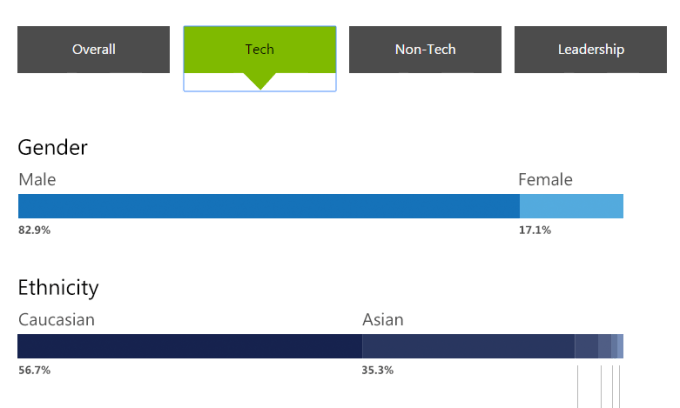 Other technology companies have released their own diversity data, showing similar large number of white male workers. The entire industry has work to do. As Jackson argued in his remarks at the meeting, the “leadership and the workforce of the technology industry does not look like America.”