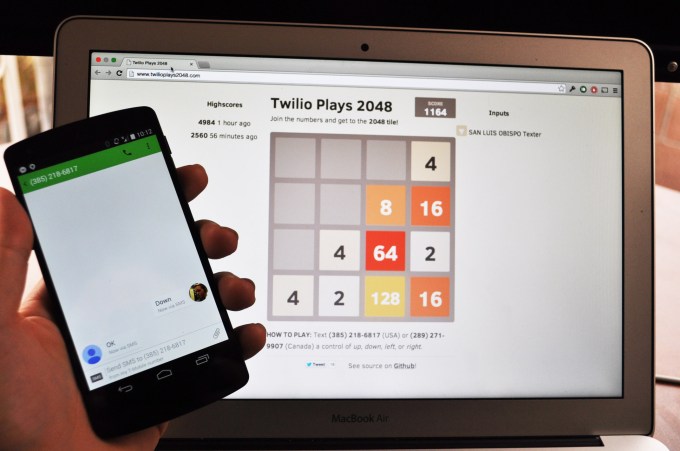 Remember all of the wonderfully entertaining frustration that was Twitch Plays Pokemon?

Take that concept and turn it on its head. Wrap it around a puzzle game instead of a side-scroller, and have players text in commands rather than input them via chat.

The idea? Many players, all trying to play the same game of 2048 — and all of them playing by text message.

TwilioPlays2048 won’t blow up the way TwitchPlaysPokemon did, of course. It’s missing the kitschy nostalgia that Pokemon inherently brought to mix, and convincing people to text some strange number is going to be a whole lot tougher than getting them to sign up for a relatively disposable Twitch account. Plus, no chatroom means no sense of camaraderie/endless arguing about what to do next, and that’s half the fun.

But it’s still worth noting, if only because it’s a damned clever way to do multiplayer that hasn’t really been showcased much before. Imagine if they allowed you to create your own private rooms, rather than having one big universal lobby. You could throw the game’s visuals up onto a TV, gather all your friends around the set, and have everyone participate regardless of smartphone platform. No complicated screencasting necessary, no syncing up everyone’s devices — just grab a laptop, and have everyone whip out their phone of choice.

A trivia game like that would be a hit.

So far, players have managed to rack up a high score just shy of 5,000 before collectively playing themselves into a corner.

TwilioPlays2048 was built by Tejas Manohar (a highschooler!), with a few small additions to the open-source project contributed by others.