Editor’s note: Christian Hernandez is a managing partner of White Star Capital and Stephen Piron is co-founder of data-analytics firm BrightSun. The data for this post was compiled from multiple channels through the BrightSun startup discovery tool.

A lot has been written in the last few years on the evolution of the technology ecosystem in Europe, including Christian’s own bullish stance on Europe, Stephen’s piece on the explosion of seed funds in the region, and articles touting London and Berlin as the two local leading startup hubs.

Our intent with this analysis was to use data to determine the challenges and opportunities surrounding the European entrepreneurial ecosystem. European companies raise smaller rounds at each stage versus their U.S. counterparts and make that funding last as much as eight months longer before securing the next one. A clear funding gap remains in Europe at the Series A stage and there is a more aggressive Series B crunch, as well. 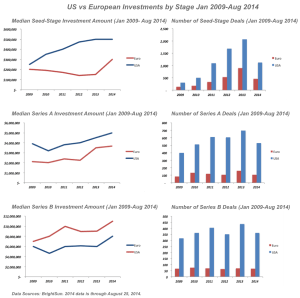 However, this is changing. There are a greater number of institutional funding sources as evidenced by the rise of new early-stage venture firms like our own White Star Capital, Passion Capital and Point Nine. We are also seeing growth-stage investors like Atomico and Highland Capital Europe close funds with a view to supporting Series B rounds alongside Accel and Index.

These new investors are responding to the increasing strength, vibrancy and tenacity of European entrepreneurs. The number of European companies successfully raising seed-stage funding has increased 600 percent in the last five years. The median size of Series A rounds is steadily increasing. European exits are accelerating in volume from Helsinki and London to Madrid and Berlin.

The volume of seed-stage deals has accelerated significantly in the past few years across both regions with the US increasing by 85 percent between 2009-2013 to over 2,000 seed-stage deals and the EU increasing almost six-fold to over 900 deals per year.

This phenomenon has likely been driven by macro-economic, policy and social factors leading to a greater appetite for entrepreneurship, various tax incentives for angel investors across the region, and a larger number of accelerators and incubators in every major European hub.

The Funding Gap Starts at the Seed Round

In other words, for most of the past five years, seed-stage companies in Europe were under-capitalized relative to their U.S. competitors. This could imply that European founders are building businesses with only one-third the potential of their transatlantic counterparts, but we would strongly disagree with that assumption.

We acknowledge that the U.S. market offers greater scale at outset. However, we would point to the growing momentum and global potential of European startups as evidenced recently by King, SuperCell, BlaBlaCar, Klarna, Spotify and others.  We would further contend that the global reach of distribution channels like Facebook, Twitter, the App Store and Google Play are making the size of any single market less relevant.

The Series A and B Crunches Are Bigger in Europe

However, if we look at the ratio of seed stage companies that succeed in raising Series A rounds, we see that the “Series A Crunch” is twice as acute in Europe. Out of our data set of over 9,000 seed deals since January 2009, only 6 percent of European companies managed to secure an A round, compared with 12 percent in the US. Even more tellingly, only 1.5 percent of the European companies went on to raise a Series B compared to 4 percent in the U.S.

So while the gap in median dollar amount invested at Series A is narrowing, the supply of capital is extenuating the narrowing of the funnel for early-stage companies in Europe and continues through later stages.

Less Funding, Longer Burn for Series B in Europe

The U.S. strongly outpaces Europe at the Series B stage both in terms of the percentage of deals that gain funding and also of the round size

The number of Series B deals in Europe remained flat over the period while it grew 37 percent in the U.S. Since 2012 there has consistently been a $3 million gap between the median size of a U.S. Series B and a European one. This signals a dangerous under-capitalization of European companies, especially as they attempt to compete at scale with their U.S. counterparts.

We dug deeper into this phenomenon by looking at the “speed” of investments. Speed, in this context, is the average number of days for a company that announced the raise of a seed round to raise a Series A round and subsequently a Series B round. 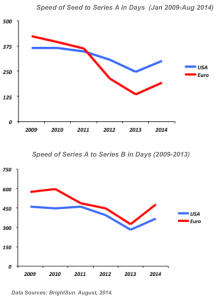 We suspect that the reduced time between rounds in Europe unfortunately signals that entrepreneurs are being forced to refocus on fundraising more quickly at the expense of building and scaling a product and the business.

For Series B, U.S. companies, on average, raise 375 days after their Series A compared with 486 days in Europe. In other words, European companies (whose Series A rounds were 20 percent smaller to begin with) must make that money last for four months longer before raising a Series B.  European startups are likely using a larger proportion of their funding to support burn rather than investing in growth and scale.

As European funders and founders, we both strongly believe that the intellectual, technical and creative talent of Europe is turning its attention toward the digital arena. European entrepreneurs have the ambition, competency and foresight to create global leaders in their sectors, and the data proves the momentum, but also the challenges ahead.