Oculus VR is the key platform partner behind Samsung’s new Gear VR, having co-developed the hardware and having built the Oculus Mobile software development kit and first party demonstration apps entirely in-house. The company’s foray into mobile may be newly revealed, but it began not long after the original Oculus Rift hardware was introduced to the world at CES in 2013.

“We generated all of this excitement, and people just really got enthusiastic,” Oculus Rift CEO Brendan Iribe explained in an interview with TechCrunch. “We showed up with still just a prototype at the time, and got numerous awards and then met with Samsung not too long after that.”

Oculus had been seeking to meet with Samsung for a while, because it rightly figured the company’s AMOLED screen technology would be a key piece of its tech picture for the Oculus Rift headset. Samsung, while interested in that supply relationship, also had designs on mobile VR and its future, it turned out.

“When we met with [Samsung,] they said ‘Actually, we’re happy to support VR in your products with screen technology, but we also think there’s an opportunity on mobile,’ and they brought the first prototype [of Gear VR] to the table,” Iribe recounted. “They said they’d been working on it a while, and we asked how long, and they said ‘Oh a few months,’ so it was when we made all this noise worldwide at CES that they decided to get involved.”

Initially, Iribe and Oculus were skeptical of what could be accomplished in terms of virtual reality on the mobile side of things – the team had been working on devices powered by impressive desktop hardware, after all. But they were still open to the possibility, and decided to take Samsung’s first and see what they could develop on top of it.

“We took it back to the lab, their prototype, and played with it a little bit, and an idea came to us,” he said. “The sensor inside of a phone is just not good enough to deliver great VR; it’s not fast enough, it’s not accurate enough, etc. But what if we glued the sensor from the DK1 [initial developer prototype of Oculus Rift] on the side of this thing and jacked it into the USB port? Lo and behold, we started to see really promising results.”

The mobile possibilities are what helped convince ID founder John Carmack to join the company, and while Iribe says it wasn’t the sole cause for him coming on board, the smartphone-powered VR prototype did pique his interest in a considerable way.

“We showed it to John Carmack, and he got super excited and said basically ‘I think there’s real potential here and I’d like to dedicate my next few years to making this a reality because I really believe in the whole mobile VR untethered world,'” Iribe added.

Once that enthusiasm was established, Oculus brought in Max Cohen, the company’s VP of Mobile. Carmack ran the mobile effort for the first few months, through his trademark practice of what Iribe describes as “locking himself in a room” and working away on a problem with single-minded determination. But while Carmack provided the initial zeal, he isn’t the only one at Oculus focusing on mobile platform development efforts.

“What’s great about John on this project is that he has amazing ideas, and a lot of them he’ll take all the way to completion because he’s just very productive,” Cohen explained to TechCrunch. “But other times there will be other very capable developers on the team who can take that and make the magic happen themselves, freeing up John to come up with the next crazy idea.”

Carmack and the mobile team iterating on the hardware and software experience have resulted in a final product that, while still not “immersive” in the way that the Oculus Rift prototype is, by Oculus’ own admission, is still heads and tails beyond the competition, according to Iribe.

“When we saw the first Samsung demo, it looked like what most of the other mobile VR demos have looked like, whether it was Google Cardboard or FOV2GO,” he said. “There’s a sea of these kind of crappy mobile VR headsets where they just don’t deliver a great experience. You certainly wouldn’t want to strap any one of them to your head for more than a few seconds.”

[youtube https://www.youtube.com/watch?v=5n5ov-DKBMA&w=640&h=480]
The FOV2GO research project from the Mixed REality Lab at the USC Institute for Creative Technologies

Oculus’ efforts with its own sensor, and with supplementing other aspects of Samsung’s design, as well as with working on the software development tools and first-party apps are what set this apart from experiments like Google Cardboard. This remains an experimental project itself, however, intended for early adopters and developers, and even Iribe admits that wide consumer availability is probably still a ways away.

“This is something that is not ready for mass market consumers, but it will be soon, and as it is, and as it rolls out, you’ll start to see more devices powered by Oculus over the next few years,” he said. “A decade from now, or even less than a decade – five, seven or eight years from now, I think you’ll see a lot of devices powered by Oculus available across both mobile and PC.”

Neither Iribe nor Cohen would comment on any discussions with smartphone OEMs beyond Samsung, saying they’re currently “laser-focused on Samsung,” but Iribe did concede that he believes mobile manufactures competing with the Korean company will at least want what Gear VR offers once they see how well it performs. 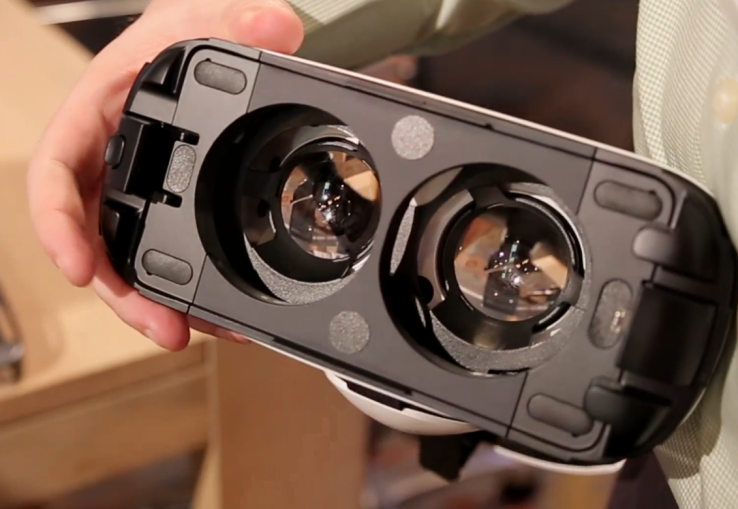 Iribe and Cohen say that the Samsung partnership and Gear VR project were in place long before Facebook came along, and that the social network company’s acquisition of Oculus VR had virtually no effect on their project roadmap with the mobile maker. The Oculus parent company was nothing but supportive, and offered resources at every step, according to the two, but Iribe says ultimately this was still entirely an Oculus project, managed and run by the Oculus team with its own goals in mind. Still, Facebook is obviously interested in the future of mobile, so the partners’ interests clearly align in this case.

Ultimately, mobility may be what helps popularize Oculus to a degree greater than any technical wizardry behind the goggles could accomplish – Iribe says that already, he’s been able to demo Gear VR more easily to a wider number of people in a shorter amount of time than he ever could with Oculus Rift, given its relative portability and the simplicity of the setup. VR is one of those technical achievements that’s hard for people to wrap their heads around without experiencing first-hand, and Gear VR could do more for Oculus in that regard in a short period of time than the scant number of Rift developer units has since they became available.

Whatever its ultimate fate, the Gear VR is a proof-of-concept for a mobile incarnation of immersive computing, and Iribe, Carmack, Cohen and their team have used it to prove that while Google might poke fun with cardboard larks, Oculus isn’t playing around when it comes to smartphones and virtual reality.