Editor’s note: Zachary Hanson and Diogo Duarte are the co-founders of the Fidelity Network, a Miami-based brand loyalty startup.

One of the great challenges for startups is figuring out where to start. Entrepreneurs believe that unless they build something now, their idea will become outdated or stolen by their competitor. However, that thought process is akin to running a marathon with one month of training. Yes, it can be done, but you run the risk of burning out and failing more quickly. What is needed is a contemporary guideline to help develop unadulterated focus for the new startup founder.

Great startup mentors understand this struggle, and the very best mentors soothe their disciples by telling them what to focus on in the beginning — things such as, iterating the core idea, creating a simple business model, or guidance on building the minimum viable product (MVP).

Based on our own experience with mentors and the chaotic birth of our startup, we have developed a linear remedy that all entrepreneurs can apply to improve their chances of success. Our theory is called “The Poet, Scientist, Journalist, Boxer Approach to Entrepreneurship.” 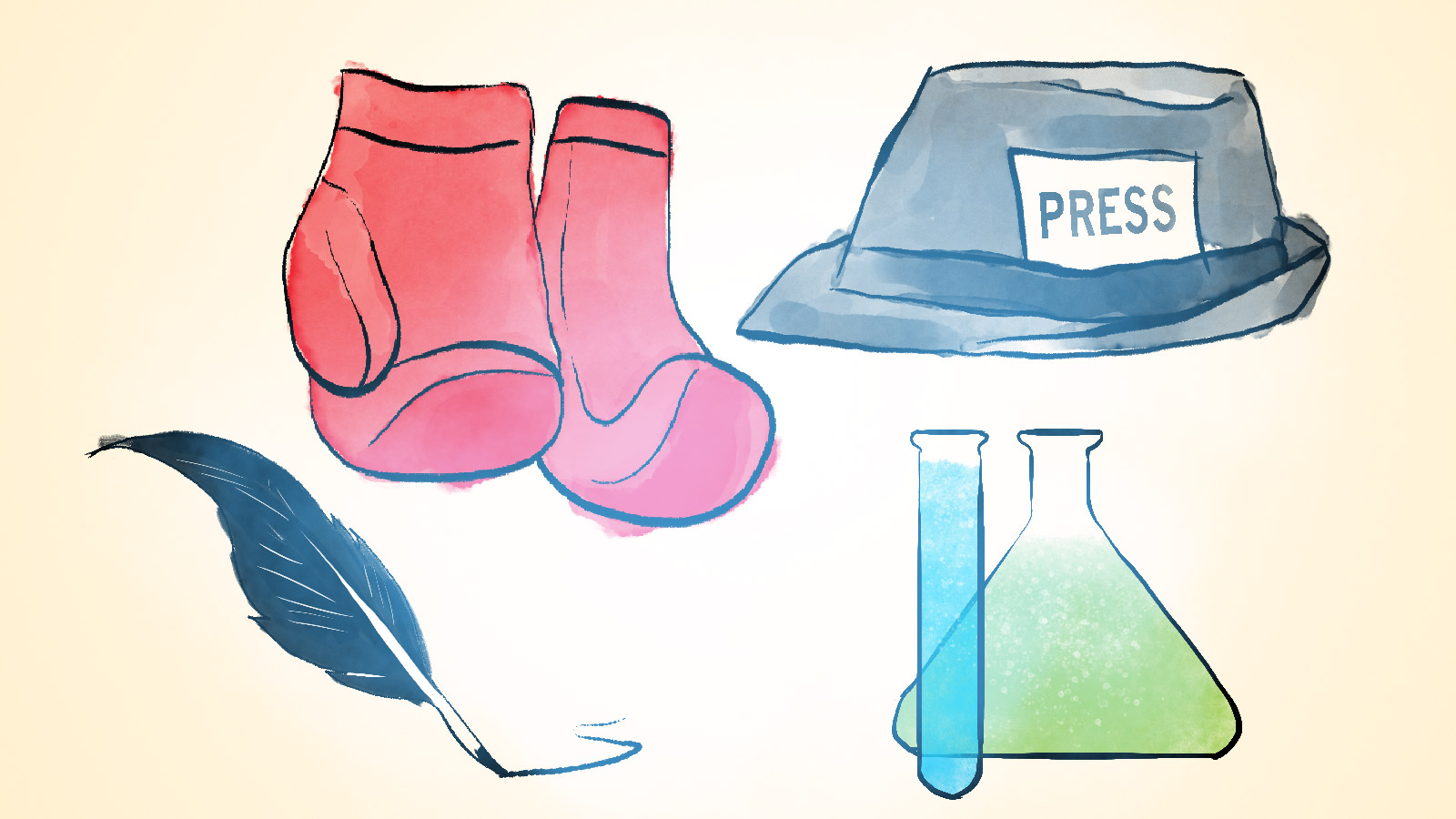 “A poet is full of positive enthusiasm, his head is so full of ideas, that he can’t sleep until he expresses all his thoughts.”

The four-stage process starts with the poet. This stage is initiated the second that the proverbial “apple” falls on your head and you know that you have a great idea. The telltale signs of this experience are having trouble sleeping and feeling a mix between wanting to tell everyone about your idea and the feeling of paranoia that if you mention it someone will steal it.

Once you recognize that you have entered the poet stage, it is time to channel your inner Walt Whitman and put all of your thoughts down on paper. Putting your ideas in writing, ink to paper, is an important part of establishing a real understanding of your own idea.

Now, don’t worry about your tone or voice, just write as if you were planning to start a revolution — pour your heart and soul into it. Write your values, your vision, your goals, and focus on why and how your idea will change people’s lives.

Once you can’t squeeze anything else out of your brain, it’s time to put your lab coat on.

“The scientist’s goal is to find the core value for the customer, get rid of excess features, and start testing it.”

Step two, becoming a scientist, involves developing and releasing your MVP. With critical eyes, you must look back at the work of the poet and extrapolate the core theory and decide what is needed to test that idea.

Here, feasibility is key, which means that the scientist must only pick what is necessary to test the poet’s theory. The scientist, with the help of engineers, then builds a test experiment. This experiment should encompass the core idea and lead to the development and delivery of the MVP.

Once the MVP is shipped, you send the journalist out in the field to tell the story.

“Unlike the poet and scientist, the journalist is unbiased, neutral, and focuses on the voice of the customer (VOC). The journalist is careful not to lead the person he is interviewing, and tries to capture their every thought in order to learn.”

Step three is to become a journalist.  It’s now time to listen to the first users (also known as early adopters) and learn from them. You no longer stand on your pulpit preaching your product’s utility, but instead inquire and listen as to whether the user sees your products in the same light.

When interviewing users, it is important to ask open-ended questions that trigger enlightened responses. The journalist then takes all of the knowledge gathered from the users and drafts the company’s bigger story — the story about the marketable product, and how it will fit into and change the market you are entering.

Now that you have validated your original idea through science and journalism, you are ready to strap on your gloves and fight to take your idea to market.

“The boxer knows he has to be quick on his feet, focused, and strong to fight battle after battle. He always gets up from his failures with his head and hands held high.”

Becoming the boxer is the ultimate achievement for the startup founder. When you get to this point and lace up your gloves, you will be set to face many opponents from several weight classes.

As with any great fighter, it is imperative to study your opponents in depth. The boxer becomes an expert at dealing with pitching events, customers, investors, incubators and PR relations. Pictures of all of the upcoming opponents are hanging on the boxer’s wall as a reminder of the fight to come — and the boxer can’t wait to throw the first punch.

The moment the boxer steps into the ring, there is no turning back. There are 12 rounds to be fought in order to get your product to market. Every round you can either win or lose, but every time you return to your corner you will iterate with your mentors and adapt your product to the situation before heading back into the fight.

Given the nature of fighting, you will always run the risk of getting knocked out during any round (e.g. maybe you find out the market you entered is saturated, or your product is not going to survive), or conversely, you could knock your opponent out cold (e.g. maybe you receive a buy-out offer from a large company).

As a seasoned pro you know that those are the risks and rewards of the startup fight and that the battle could end early, but you always come prepared to slug it out for all 12 rounds.

No matter the outcome, the boxer always picks himself up, win or lose, and lives to fight another day.

The journey to the ring is a long one. It takes time and patience to make sure that you are prepared to face your opponents, and at the end of the day you will always run the risk of failure.

That inherent risk is secretly (or not so secretly) what so many entrepreneurs crave, and just as the adrenaline junky throws himself off of a building to get his fix, it is time for you to prepare yourself to step into the startup ring and feel the rush.

Express your inner poet, build the experiment, tell the story, and make sure you are training for the fight.