Pinterest today is unveiling a new way users can communicate, collaborate and share with one another. With the launch of a new messaging feature, users will be able to keep discussions going on Pinterest around their favorite Pins without having to leave the site or apps.

Last spring, Pinterest launched its Send a Pin feature, which enabled users to share interesting Pins with their friends on and off the site. Users that were connected on Pinterest would receive a notification that would point them to the shared pin. And others would receive emails about the content that was shared.

Since then, the feature has become incredibly popular with users — which Pinterest like to call “Pinners” — with more than 2 million Pins sent each day. But it wasn’t all that useful.

While sending a Pin was a good way for users on Pinterest to pass along content that users had common interest in, there wasn’t much that users could do with those pins after they were sent. Many users ended up responding to email notifications as a way to continue the conversation around things that were shared with them.

The hope is that the new messaging feature will enable Pinners to keep conversations going without having to leave the site.

A team of five made the trip north to work with Product Designer Tom Watson, formerly of Facebook. They lived out of an Airbnb and worked out of the Portland Incubator Experiment (PIE) for five days. On Friday, they had the first Messaging prototype.

That was about two months ago. Since then, Pinterest has been working internally with employees and so-called “Power Pinners” to refine the product. That meant working out the kinks, and to ensure that the user experience wouldn’t take away from what users come to the service to do — which is to Pin stuff.

Pinterest’s take on messaging is similar to what you’ll see on other social networks, but there are some key differences. One of those differences is that unlike Facebook, Pinterest’s messaging feature doesn’t have a persistent contact list that follows you around everywhere. That’s by design. Pinterest doesn’t want its service to become about messaging, but wants messaging to empower the way people use its platform.

“We’re not a communications service,” Yamartino said. “We’re not trying to be the place to say ‘What’s up?’ or ‘When are you coming home?'”

When users choose to Send a Pin, they are shown a list of contacts to choose from. Once that Pin is sent, the conversation appears in the lower left-hand corner of the website or tablet app. (Mobile users will be treated to an entirely separate dialogue screen for messages.)

The avatars of users that you’ve exchanged messages with look kind of like Facebook’s “chat heads,” and conversations can be selected by clicking on them. They can be just as easily shut down by clicking the “x” in the corner of each. On the website, avatars and conversations only partially cover the frames behind them, allowing Pinners to scroll through and still see the content shared in their global feed. 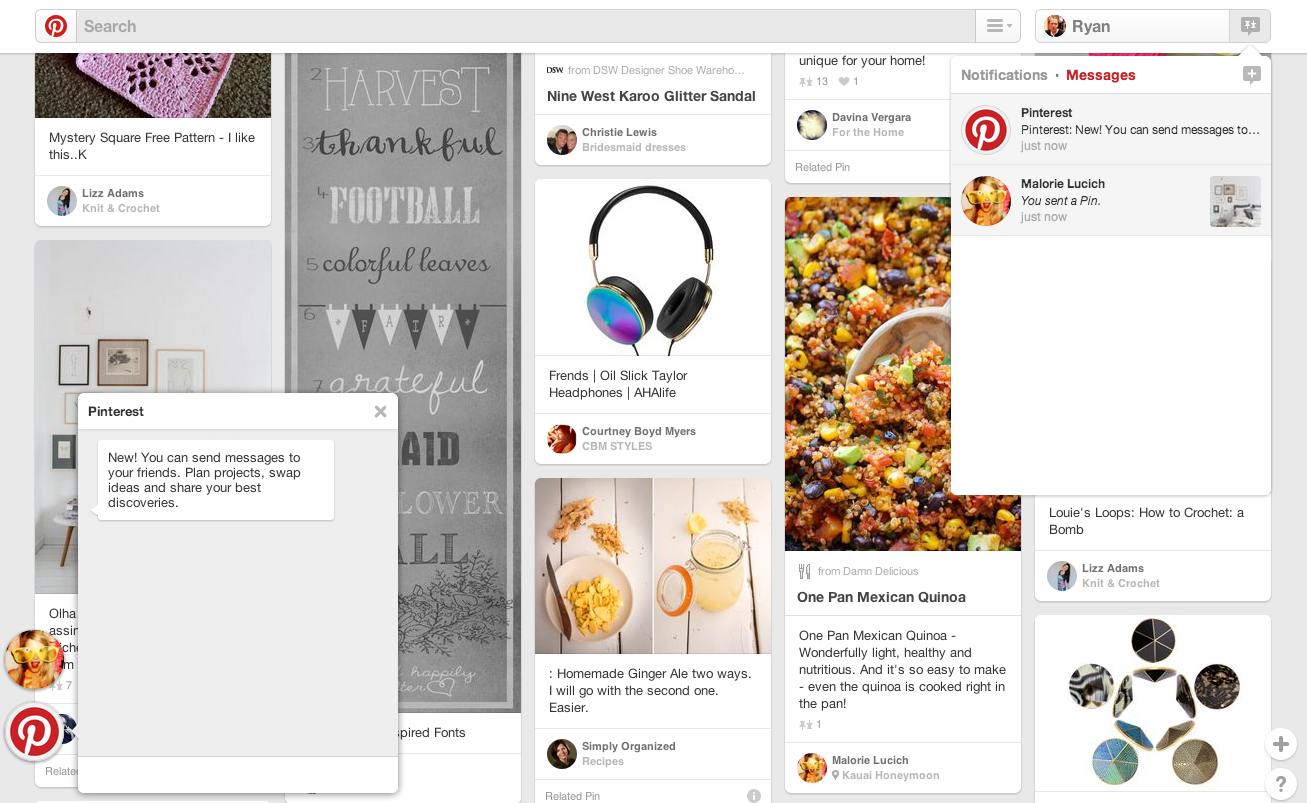 There are a few nifty features that could lead to messaging blowing up. For instance, Pinterest has introduced its Guided Search directly into the messages field, so that Pinners can search for, discover, and share content that is relevant to the conversation they are having on the fly.

That means new ways of sharing and collaborating on things via Pins. Let’s say you’re working on a home remodeling project with your wife, for instance. Now you can swap ideas back and forth without sharing in your global feed.

Or let’s say you’re planning a trip with a group. Now the entire entourage can use Pins as a way to collaborate on places to go and set an agenda. Which reminds me… Pinterest Messaging is available for groups, in addition to one-on-one conversations. Up to 10 people can share Pins with one another.

“We think that a lot of the projects people take on… they do this with friend or partner,” Yamartino told me. “Being able to have that conversation on Pinterest is convenient for them.”

For Pinterest, it also means keeping the conversation on its platform. That will lead to more Pins being shared, and more engaged users. For a network like Pinterest, where user engagement is its most valuable currency, that’s a very, very good thing.