Editor’s Note: Nir Eyal writes about the intersection of psychology, technology and business at NirAndFar.com. He is the author of “Hooked: How to Build Habit-Forming Products”.

Recently, I started looking into the explosively popular new game Kim Kardashian: Hollywood. The game has ranked at or near the top of Apple’s U.S. App Store charts for the most downloaded free game. Industry watchers say the app could gross $200 million annually and net Kardashian a sizable chunk of the game’s profits.

My line of work is researching what makes some products so compelling and in the case of the Kardashian game, I wanted to know what was behind the app’s phenomenal growth.

I soon discovered that one potential driver of all of its installs is a rather sneaky tactic that exploits user error and can unwittingly post messages to players’ Twitter accounts.

Unlike viral loops, which are actions users take in the normal course of using a product to invite new members, viral oops rely on the user ‘effing-up.

A classic example of a viral loop can be found in a product like Paypal. If one user wants to send cash to another, the receiver generally opens a Paypal account to redeem the funds. Conceivably, when the new user wants to send money themselves, they’ll usher-in more new members and the loop continues.

However, in the case of a viral oops, the user doesn’t realize what they’ve just done.

A viral oops isn’t necessarily a deception by the company — in the way sending messages without the user’s permission might be — rather, it is more of a digital sleight of hand. Like a magic trick, when retracing the steps to figure out what just happened, it’s obvious how the viral oops occurred and the user most often blames themselves rather than the company for allowing the misstep.

In the case of Kim Kardashian: Hollywood, the game begins innocently enough. The app is a classic role-playing game where players take the part of an up and coming Hollywood celebrity determined to climb the ranks up to “A-List” status. To get there, players must pass through lower levels of stardom on the E, D, C, and B-Lists. Moving through these levels requires completing tasks like posing for magazines, going on dates, and as best as I can tell, shoplifting for Kim Kardashian. 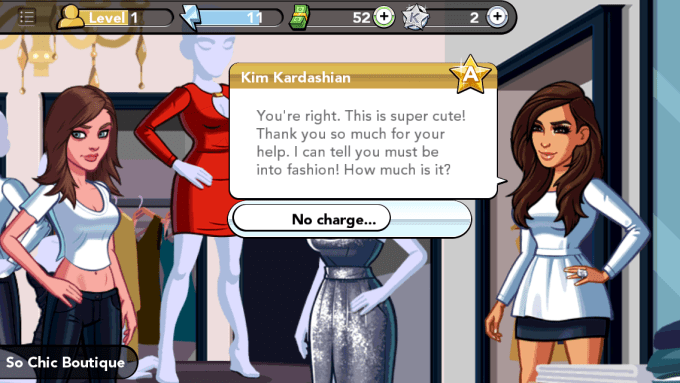 Finishing a task requires repetitive thumb tapping that uses-up energy points. Energy is replenished by waiting for a period of time or by paying real dollars to get back into the game. This is how the millions are made, but that’s not the sneaky part.

Here’s how the viral oops works: The game features a “feed update,” which pops-up occasionally to provide news and gossip like a Twitter account. Fictitious characters in the game like Paris Hilton lookalike @WillowPape update their feeds with hashtag-filled 140-character bursts — just like on Twitter. A constant count of “fans” hovers on screen, further giving the impression that the game has it’s own version of Twitter.

When the game asked me to follow a news reporter named Ray Powers by his handle @StarNews_Ray, doing so felt like part of game play. Naturally, I assumed that the Twitter in the game isn’t the real-world Twitter. How could it be?

In the screen shot below my avatar reads tweets between @WillowPape and @StarNews_Ray, both fictitious characters in the game, right? Not exactly. 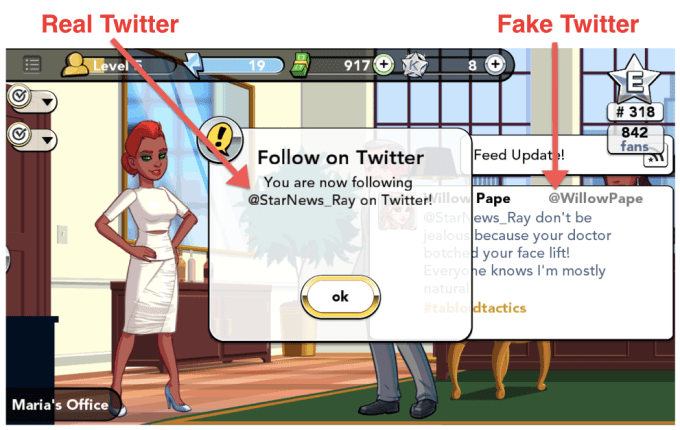 Can you tell the difference?

Now the trap was set for the viral oops. During my first session of play, the app offered points for sharing news on (what I assumed was) in-game Twitter. However, what I thought was fake Twitter turned out to be real Twitter and the tweet was sent to thousands of my followers’ streams.

The game automatically posted, “I’m now an E-list celebrity in Kim Kardashian: Hollywood. Come join me and become famous too by playing on iPhone!” and included a link to download the app.

A search on Twitter revealed multiple similar tweets posted every minute. It is unclear how many of these tweets were sent by people unaware of what was happening but in the month of July over 396,000 similar auto-populated tweets were sent. One of those tweets which was certainly not intentional was from the Environmental Protection Agency’s Office of Water, which quickly deleting the post after realizing the error. 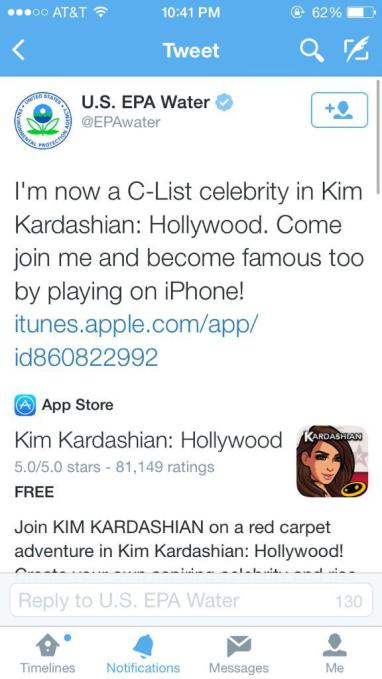 It appears all these mistakes were no accident. However, according to Glu Mobile’s CEO, Niccolo de Masi, cases of people mistakenly tweeting from the game are rare. “There is always .0001% of people who get confused,” de Masi told me. “When you have this many people installing the game,” de Masi said during our call, “you’re going to have a lot of people playing that haven’t played games before. It’s a symptom of tremendous success and popular appeal.”

Perhaps as de Masi argues, the people making this mistake are tech novices. However, even Sarah Buhr, a reporter for TechCrunch and conceivably one of the most tech-literate people around made the very same error, admitting, “What the game neglected to tell me is that it would tweet out to all my followers in real life that I, a grown woman, was playing Kim Kardashian Hollywood.”

De Masi was quick to point out that, “this is the best reviewed game in the app store” and that the company has not heard significant complaints from players. He credited Kardashian’s celebrity and massive social media following for the game’s popularity.

Glu Mobile insists there is no intent to deceive but De Masi would not comment on what percentage of installs came from Twitter. De Masi believes the game is growing through word of mouth — people just want to tell others about it.

Regardless of whether the tactic is something the company is doing consciously or not, it appears to be benefiting from all the tweeting. De Masi said, “Glu as a company doesn’t spend as much money as competitors [on user acquisition] … We spend 15% whereas our competitors spend 40%.” As is often the case with the viral oops, I wasn’t sure if even the game maker wasn’t fooled into thinking all that tweeting was authentic.

When I asked De Masi whether the company had any plans to change the game, his response was that the problem was “not an issue” and “not on our radar as far something that has been a concern to millions of fans.”

Clearly, the 2.8 billion minutes players have spent in the game is a testament to its appeal. However, how much of the game’s growth is a result of real player endorsements versus a technological sleight of hand called the viral oops, is still an open question.