Polish 3D printer maker MonkeyFab has created a 3D scan of the Mały Powstaniec or Little Resistance Fighter, a statue in Warsaw’s Old Town that commemorates the Warsaw Uprising.

Designed in 1946 by Jerzy Jarnuszkiewicz and unveiled in 1983 by Professor Jerzy Świderski, the monument depicts a little rebel, Antek, in stylized German military garb. This is the 70th anniversary of the Uprising, which began on August 1, 1944 and ended in October of that year. The team at MonkeyFab, Piotr and Paweł Twardo, scanned the statue one afternoon by connecting their DLP-based 3D scanner to a portable generator and quickly grabbing images from all sides before anyone noticed.

Their goal was to commemorate the Uprising by offering the a model of the little soldier to everyone around the world.

They printed the statue on their Prime3D, a RepRap-based 3D printer that ships in kit form. The brothers make almost all of the parts, except the motors and PCBs, in and around Warsaw and they CNC a number of the parts in their basement. They write that they will upload the full 3D model when they’ve finished troubleshooting some of the surfaces.

“For many of us this statue reminds us of all the times when children visited their grandparents and listened in silence listening to the stories of the uprising. It’s a symbol of what every Pole has in his heart,” wrote Piotr. 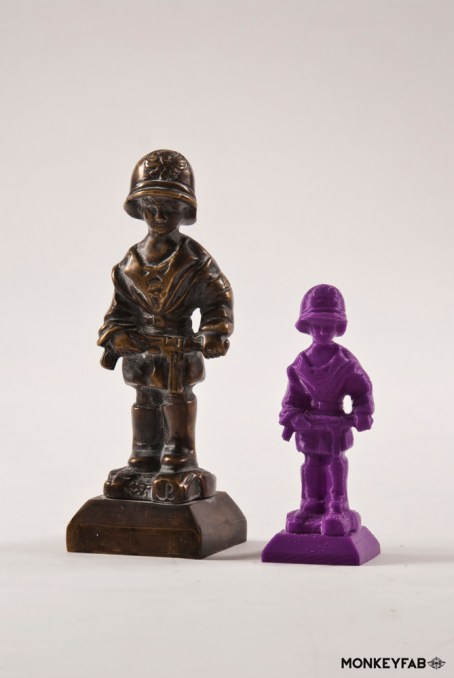