When you hear “Oculus Rift” you think games, but it looks like virtual tours are becoming a new category to the uses for the virtual reality device.

Founders of YouVisit, a virtual tour company, Taher Baderkhan, Abi Mandelbaum and Endri Tolka met in their first year of college and they had one thing in common: they were all international students. 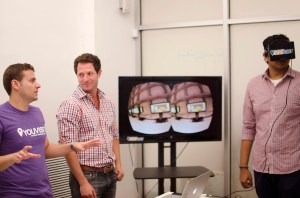 Endri Tolka, left, and Taher Baderkhan, middle, guide me through how the virtual tour works through the Oculus Rift. Image by Steve Long.

They realized there was no easy way to tour a college or learn about college lifestyles in another country without shelling out for a plane ticket. After graduating, they began to work on a project that would help ease worries of transportation time and costs for college tours.

Formerly YourCampus360, they created a website in 2008 that provides virtual walking tours to about 1,000 universities that have partnered with the company. The tours on the website resemble traveling through Google Street View, but with a virtual tour guide.

They’ve since expanded their tours to mobile apps for Android and iOS, as well as Facebook apps. Through the years their partnerships expanded as well from universities in the U.S. to colleges in South America, Africa and Canada.

Universities hire YouVisit’s photography team to their campus to take panoramas and 360 shots for the tours. The team uses Canon Mark IIIs and have developed their own software to stitch the panoramas together.

Tolka said universities were so interested in this project that they gave them unprecedented access to rooms and labs that even members of the administration never entered.

The results blew their mind.

“Our first reaction was like holy crap, we got something awesome. Let’s see what we can do with this. So then we started building more and more and now we’ve built a platform that enables anyone with an Oculus device to come to our tours and connect to it and view these tours in virtual reality spaces,” Baderkhan said.

They began shipping out the Oculus Rift to a few universities in a pilot program, where admissions personnel would take it to high schools for students to try.

The program was so popular that universities began buying Oculus development kits themselves to use with YouVisit’s software.

I was given the opportunity to demo a tour with the Oculus Rift at YouVisit’s headquarters, and while it can leave you a bit dizzy if you move your head too fast, the result is pretty amazing.

I toured Yale University and one of the places they took me to was the library, which is breathtaking to behold.

When you put the Oculus on, you really feel as though you have been transported to the college. Once you look around, you’ll find a GPS marker. Staring at it for a few seconds will take you to a new area. If you look down, there’s a gallery button that if you stare at, takes you to a gallery of places at the university to choose from to see in the tour. Just stare at a location and it will take you there.

The navigation is pretty intuitive and worked fluidly. Baderkhan said the team plans to add an information box as well as a map, which is already in the web tour, as a part of a heads-up display in the Oculus when they get the Oculus Rift Development Kit 2. The DevKit2 improves the resolution to full HD and also fixes the latency issue which caused some dizziness in the older model. 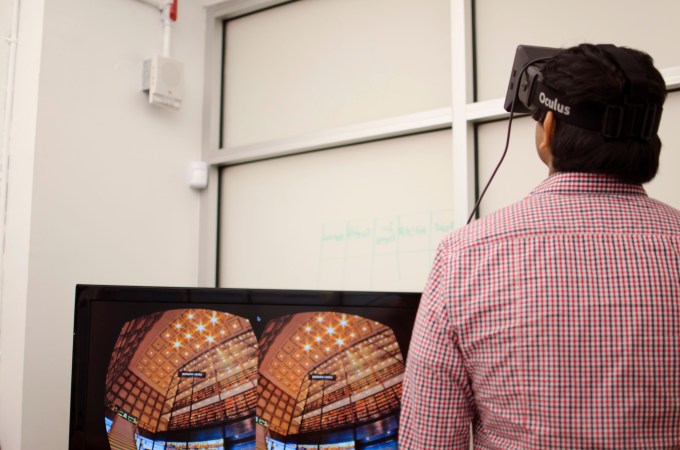 Here I am looking up at the Yale University Library. Image by Steve Long.

I can see why admissions officers are reaching out to the company for access to the Oculus device to take on their high school visits. It has the potential to help a high school student debating between 10 schools to cut it down to two or three.

One of the first schools to start using the Oculus Rift with YouVisit’s software is the Audencia Nantes School of Management in France. Benjamin Rethmel, international relations representative believes the technology is a game changer.

“The way YouVisit was able to use the technology in a way that’s not linked to cinema or video games — it really shows the possibilities of what the Oculus Rift is going to do,” Rethmel said.

He said the school wanted to be one of the first to provide these virtual tours to help bring students to their campus through the Oculus Rift.

The school plans to purchase the Oculus Rift and begin using it to lure students to their campus this fall.

“I think it’s really important for students to see where they’re going to be. … It has a very positive effect on them,” he said.

Tolka said he wishes Facebook and Oculus VR would work faster on releasing a commercial product as YouVisit is ready to use it for their software.

“When the pilot program was launched, we went into some college fairs and put it in the hands of students, and even like a 10-year-old kid … seeing them use it and how it affects them and how it gets them excited about going to university — to us that’s extra,” Baderkhan said.

College tours aren’t the only product YouVisit is interested in. They’re working on and planning to move into different types of tours. Tolka said they are working with Fortune 500 companies as well as doing a project in Central Park.