It’s been a busy few months for Time Inc. Not only has the publishing company spun out from Time Warner, it has also revamped the websites for its publications Time, Money, and Fortune. Now Sports Illustrated is launching a new website, and new products, too.

I got a quick tour of the website last week, and the change struck me as a bit more dramatic than the company’s other recent redesigns. Jim Delorenzo, vice president and general manager of SI.com described it as a “soup to nuts” rebuild (based on Drupal’s content management system) of both the website you see and the backend publishing tools. Instead of a standard magazine landing page, the Sports Illustrated homepage has been transformed into an endless stream of customizable modules that can feature different kinds of content, like sports scores and video highlights.

Naturally, it’s also a responsive design that will adjust the layout to accommodate different screen sizes, including those of a smartphone or tablet. Publisher Brendan Ripp said it’s designed to incorporate a variety of different ad formats, including native ads, as well. (You can see a sample expanding ad in the screenshot below.)

Even though this comes a few weeks after the spinout, Paul Fichtenbaum, editor of the Time Inc. Sports Group, said the timing is actually just “a great coincidence.”

“We started this process before anything related to the spinout was announced,” Delorenzo added.

Beyond that, the spinout (which has attracted significant skepticism) wasn’t a big topic during our conversation. Instead, we focused more on Sports Illustrated itself — the team says its online traffic, as reported by comScore, is up 49 percent year over-year. 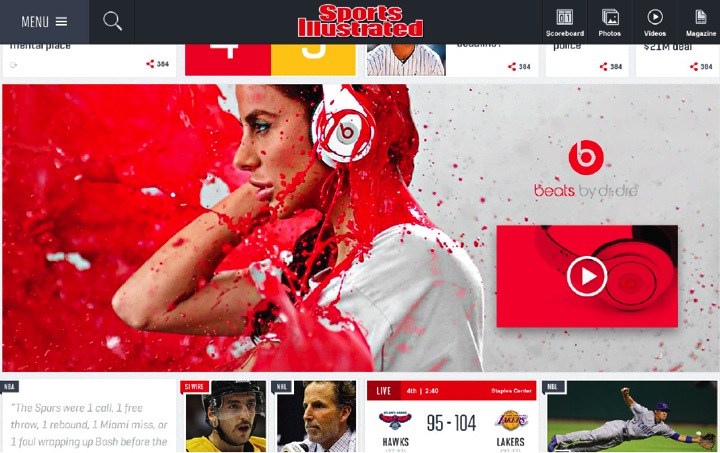 “Historically, the Sports Illustrated brand has taken three knocks,” Ripp said. First, there were complaints that the mobile experience was “sub par”. Second while it offered some fantasy sports-related analysis, it hadn’t created any a way for readers to play fantasy sports directly. Third, it wasn’t particularly good at offering game highlights on video.

That’s why Sports Illustrated is also launching a new mobile app called FanNation. Delorenzo said that luring people away from their existing fantasy sports leagues is tough, especially since they’d have to bring their friends or coworkers with them. Instead, FanNation offers an alternative experience, one that’s optimized for mobile phones — daily matchups, where you can assemble a fantasy team and go head-to-head with your friends based on the results of that day’s games. You can put money on those bets (as much or as little as you want), and the fees will become an additional revenue source for Sports Illustrated.

The team noted that FanNation will also feature SI content, and it will be promoted on the various digital properties. The app will start with baseball, then expand basketball, hockey, and football later this year.

As for the third point, video highlights, the company is planning to launch a new livestreaming service, 120 Sports, sometime this week.

With SI getting more aggressive online and on mobile, I was curious about where that leaves the print magazine.

“The magazine has an incredible, hardcore audience of really intelligent sports fans,” Fichtenbaum said. “It’s been rock solid for the last 30 years … On the business side, it’s another pipeline into our audience.”