Continuing the trend towards free, unlimited cloud storage, Microsoft this morning increased the amount of capacity that it offers free to regular users of its OneDrive service to 15 gigabytes, more than double its previous offering of 7 gigabytes.

The company will also now offer a full terabyte of storage to all Office 365 customers. If you want more storage capacity, but don’t want to pony up for Office, you can now pay $1.99 monthly for 100 gigabytes, or $3.99 each month for 200 gigabytes.

What this boils down to is that Microsoft has greatly increased the amount of storage that it is giving away for free, and, if you buy Office as a subscription in any capacity, you get what works out to nearly unlimited free cloud storage.

The single-person Office subscription, Office 365 Personal, costs $6.99 monthly and now comes with a full terabyte of storage. If you need more users, the ‘Home’ version of he same software costs a few dollars more, tipping in at $9.99 monthly and comes with a terabyte of storage per user, for up to five users. Microsoft has therefore greatly decreased the price per gigabyte it charges paying customers.

Surprising? Not at all, but interesting all the same. As a part of the platform wars, storage is an enabler. As I’ve written before, files like to be edited near where they are stored — so, whomever controls cloud file storage will be able to vend editing tools. Microsoft makes quite a bit of money selling Office, so it has a vested interest in doing well in cloud storage.

Dropbox, Box, iCloud Drive, Amazon Drive, and Google Drive all have their sights on Redmond’s cash flows, of course. That makes the Microsoft’s move to greatly expand its free offering, and enhance its paid offering, understandable.

15 free gigabytes isn’t enough, however. Box, earlier this year, offered up to 50. If Microsoft is feeling aggressive, it will acquiesce to its own logic, and provide more — the company is making a bet that when offered a massive chunk of cloud storage for a low price, consumers won’t mind paying for Office, and that 15 gigabyte carrot will keep them inside its services’ camp.

But, as this Google Trends chart points out, Microsoft is running behind its rivals when it comes to consumer mindshare: 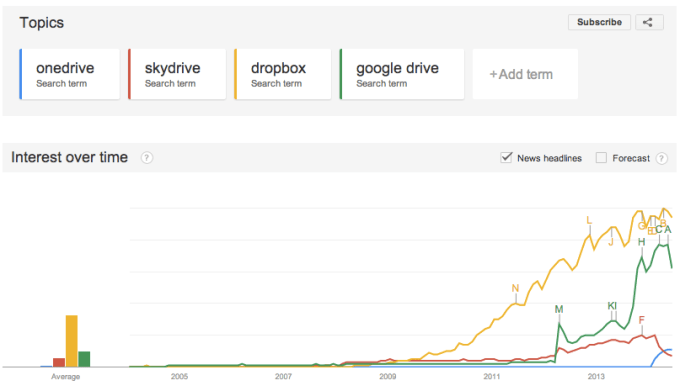 Therefore, the company should be all the more aggressive, provided that it wants to increase its share of the growing cloud storage market.

Its moves today are useful, but don’t go as far as I might have hoped. When you have essentially unlimited cash, why not stomp on the gas pedal and do your damnedest to hit top speed?

IMAGE BY FLICKR USER NICOLAS RAYMOND UNDER CC BY 2.0 LICENSE (IMAGE HAS BEEN CROPPED)