Google has been in talks to acquire video search startup Baarzo, according to sources with knowledge of the company. However, those sources were less clear about whether the companies had reached a final agreement. (One suggested that the deal had closed, the other was noncommittal.)

(Update: A third source had also said that Baarzo has been acquired.)

The companies both declined to comment, Google offering its standard note: “We don’t comment on rumors or speculation.”

Baarzo describes its product as “true video search,” allowing users find specific moments in a video, like a slam dunk in a basketball clip.

If it delivers on that promise (I can’t say one way or another, since the company is not accepting signups), that would be pretty appealing to Google, both for search in YouTube and for the company’s efforts to offer “universal” search across media types. Apparently Google Executive Chairman (and former CEO) Eric Schmidt was impressed by a demonstration of the technology at Stanford’s Graduate School of Business, where co-founder and CTO Siva Yellamraju just got his MBA.

Here’s a little more of Baarzo’s description of its technology:

Unlike Google or YouTube searches, which only evaluate the text around the video, the Baarzo search technology actually analyzes the video content, recognizing hundreds of thousands of objects and millions of faces, and locates the precise moment in the video when the search objects interact in the way you had specified.

Someone tipped me off about the possible deal when people started posting on Facebook that Google had acquired Baarzo. Some of those posts were private, but at least one (screenshot below) was public.

The startup has not announced any funding, but its AngelList profile says that it was part of StartX, the accelerator for the Stanford community, and that investors include Ullas Naik of Streamlined Ventures and Matt Sonsini of Sobrato Capital. 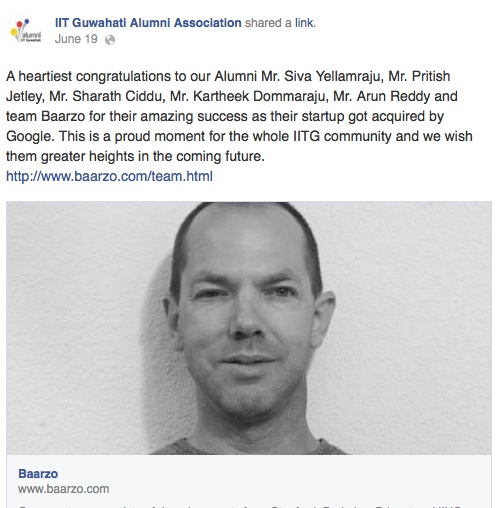