It’s been a rough year for private social networking app Path. The company has seen disappointing growth in many major markets, layoffs, and the departure of some key execs over the last 12 months. But while Path has largely remained quiet, the company has been working on a plan behind the scenes to switch up its business.

Today, Path is unveiling everything that it has been working on during that time — including the launch of a new standalone messaging app, its acquisition of business messaging service TalkTo, and what could be the start of a new revenue model for the company.

While downloads in some big markets have slowed, Path is still seeing users come back to its app. According to founder and CEO Dave Morin, the company is seeing about 4 million DAUs per day, versus around 1.5 million at the beginning of the year. Southeast Asia is now its biggest market, with the U.S. coming second, but Path is also seeing some user growth from the Middle East.

The main thing that keeps users coming back, that keeps driving engagement, is messaging. Since launching the feature a year ago, it’s been the fastest-growing feature of the app, according to Morin.

That growth comes despite the proliferation of messaging platforms like Snapchat, WhatsApp, Line, KakaoTalk, WeChat, and Facebook Messenger. It’s also despite the fact that Path’s messaging function was mostly hidden in a drawer off to one side of the app.

With the release of Path Talk, the company hopes to correct that by making an app based solely around one of its most popular features. The new messaging app takes advantage of features that the Path team has already built. For instance, users can connect with their existing Path login credentials.

Path Talk has ambient status updates that let friends know when you’re traveling, when you’re nearby, and when you have a low battery. But it only shows the most recent — and most interesting — updates to friends. 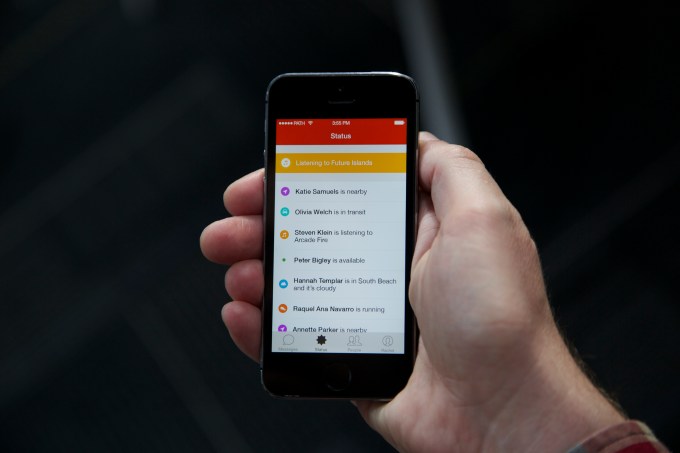 The app enables swipe-based quick replies to enable users to acknowledge messages, or question things that were sent to them. Users can also send stickers, just as they could in the old Path app. It also allows users to easily send links to media, like movies, music and books, as well as maps, locations, photos and videos through a single tap.

Path Talk also includes a few new features — like messages that disappear after 24 hours and the option of sending voice messages to other users — that it hopes will set it apart from existing messaging platforms.

But at its core, Path Talk was built as a way for users to quickly express themselves through a combination of text, media, and stickers that its existing users already love.

Updates To The Core Path App

While Path is introducing a whole new messaging app, the company is still keeping its core app available. In fact, it’s updated the app to simplify navigation and increase engagement.

Path 4.0 has moved all its core navigation to the bottom of the app, rather than hiding different features in drawers on either side of the main user interface. That enables users to access their notifications, friend list, and other features from any page within the app.

Since it released Path Talk, the company has done away with the messaging feature within its original app. Now clicking through the messaging tab will open up Path Talk if it’s installed.

If not, it will show how many messages users have accrued in the meantime. It’s clearly meant to nudge users to install the new app.

One surprising change to the app that’s flown under the radar: Path has removed its limit on the number of friends that users can connect to. While it previously held users to fewer than 150 friends, now they can add as many contacts as they want.

But the big thing here is that Path will continue to support and add new features to its core app, according to Morin.

For Path, launching a standalone messaging app is only one part of the company’s future business plan. The other part comes through its acquisition of business messaging platform TalkTo.

Consumers have gotten used to sending short messages and getting a near-instantaneous response from each other. But phone conversations with businesses tend to take a lot longer — especially if someone gets passed around to different customer service departments before getting a response. 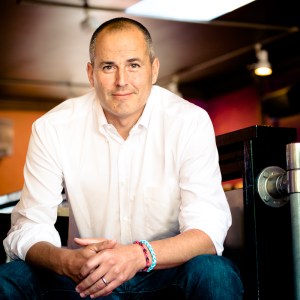 To enable TalkTo users to communicate with businesses via text, the company had a two-pronged approach. On the one hand, it worked with businesses to enable them to answer questions directly from existing and potential customers.

And for all those companies it didn’t have a business relationship with, TalkTo built out a distributed workforce that effectively worked like a call center to make calls for users, and then respond to their inquiries via text.

TalkTo, which was once a Startup Battlefield finalist, was picked up in a cash-and-stock deal, but otherwise terms weren’t disclosed.

With the acquisition, Path is hoping to eventually embed that same capability into its messaging app. In fact, Morin said that Path Talk will add “Places” alongside “People” in the bottom navigation bar in its next release, slated for later this summer.

Not only will that mean adding a new feature to its app — messaging businesses nearby — but it also has the potential to change Path’s business model going forward.

Since the release of its first “sticker packs” about 18 months ago, Path’s monetization has been driven through the sale of virtual goods. About six months after that, it added a yearly subscription offering to its à la carte sticker sales.

TalkTo’s revenues were also based on a “Premium” model, where users paid a small fee per month to have their messages “fast-tracked” and answered more quickly.

But Path sees an opportunity to move beyond those revenue models to one that leverages TalkTo’s ability to connect businesses with customers.

According to Levinson, about 75 percent of all questions posed on TalkTo are expressing an intent to purchase something. To some businesses, those requests might count as “highly qualified leads” — in other words, something they’d be willing to pay for. And that could give Path a new line of business that doesn’t rely on advertising or micro-transactions.

The Reinvention Of Path?

The big question is, ‘Will it work?’

Can Path give users a good reason to download yet another messaging app? And even if they do, can it prove that people want to text businesses the same way they want to message other people?

For its part, Path seems to believe that it’s created a compelling enough experience around messaging to warrant a whole new app. Through status updates, media sharing and the like, Path Talk combines a whole lot of features that will differentiate it from other messaging platforms that are already out there.

“We had this realization that messaging is the killer app of mobile,” Morin said. “There have been a lot of folks that have approached messaging on a one-to-one basis. But we wanted to take it further… What if it wasn’t just a messaging app but a messaging hub?”

As for texting businesses, TalkTo had users — it just didn’t have a business model that aligned the interests of consumers and businesses as well as each would like. But it seems like that will change as part of Path’s new messaging platform.

Regardless of whether or not this idea of mixing commerce and messaging actually takes off, it seems like that’s not the only thing Path has up its sleeve.

Rather than betting everything on a single user experience, the company is now pursuing a multi-app strategy, according to Morin. That means it could break out other features that had once been embedded in its original core app and let them stand on their own.

Of course, that could result in a lack of focus, as Path builds and maintains multiple different apps in tandem, but hey — maybe that’s a good thing.

Maybe, after being singularly focused on adding features to the core Path experience over the last three-and-a-half years, it’s time to experiment.

Maybe it’s time for Path to throw a little spaghetti at the wall and see what sticks.