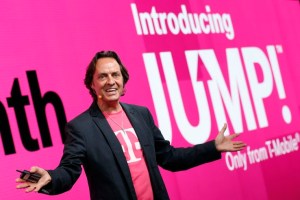 T-Mobile pulled something of a “One More Thing!” this evening, with a bit of a surprise announcement tacked onto the end of their Uncarrier 5.0 event.

As it stands, most of T-Mobile’s plans give you an allotment of data (1GB, 3GB, or 5GB) which will work at full speed. Go past that allotment, and your download/stream speeds tank down to 3G speeds.

With this change, any data used on one of the aforementioned “top music streaming services” won’t count toward your cap. And if you’re already past your cap for the month? Data pulled from these services will continue to come down at the higher speed anyway.

It’s certainly a good thing for any T-Mobile customers who might find themselves regularly blowing past their data caps, but… it’s a bit strange, from a net neutrality standpoint. By picking and choosing whose data does/doesn’t count, T-Mobile is — deliberately or not — giving certain streaming services a boost. Since they’re focusing on “top services”, it’s potentially a rich-gets-richer sort of thing.

Note, for example, the absence of Rdio from the list; with a simple act of omission, it becomes that much harder for Rdio (or, more importantly, any up-and-coming streaming service that may enter the market) to pull in any of T-Mobile’s 50 million customers.

Evil? Nah. Illegal? Nope! It’s just something to consider as the ever-expanding Internet goes through its regulatory growing pains.

During the announcement, T-Mobile’s John Legere assured the audience that their initial picks for streaming services wasn’t any sort of competitive/business move. Rather, it was a matter of technical implementation. They’ve got to manually configure the network to whitelist each service’s myriad data sources, so they picked just eight to start. The goal, Legere says, is to include “every music streaming service” in the program; moving forward, they’ll invite customers to vote on which services get added next.