After 9 years in the game, MOG has completely shut down its streaming music service and now directs users to Beats, which acquired it in July 2012 for $14 million…and which was itself acquired by Apple this week. After providing subscribers a pro-rated refund and a 60-day free trial of Beats, the MOG concluded its delayed sunsetting schedule last night by scuttling its web streaming player.

MOG was founded by former Gracenote CEO David Hyman as one of the first serious on-demand music streaming services back in 2005. It raised $24.9 million from Menlo Ventures and other investors, but never gained big traction. 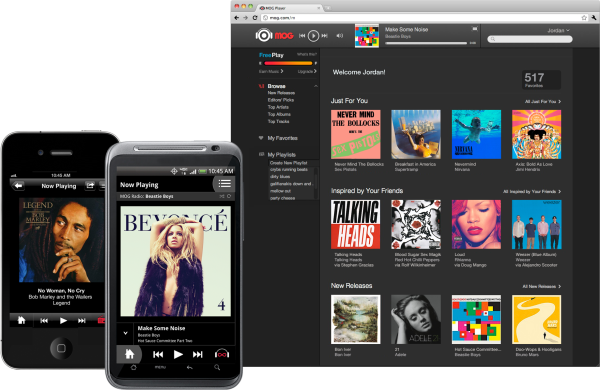 MOG watched Spotify surge past it in the US market. It cited 500,000 active users in February 2012 compared to Spotify’s 3 million paying subscribers. MOG cut its losses and sold to HTC-owned Beats Electronics later that year, though the MOG Music Network ad network was sold to Townsend Media.

Beats at the time was just a headphone maker owned by a mobile phone OEM. But soon it bought itself back from HTC, and built a streaming service based on MOG’s experience and technology. In January 2014, Beats launched Beats Music, a Spotify competitor focused on curated, personalized playlists instead of search. Then after weeks of rumors, Apple confirmed its $3 billion acquisition of Beats this week, including both the headphone and streaming businesses.

One loose end that will have to be tied up is Hyman’s $20 million lawsuit against Beats, who was brought on to steward MOG. Hyman alleges he was maliciously kicked out of Beats just before he hit his one year anniversary that would have brought him bonus equity in the company. That stake could be worth a lot of money since Beats sold to Apple.

MOG was supposed to shut dwon April 15th, but the funeral was delayed. Billing finally ceased on May 1st and MOG refunded anyone with outstanding subscriptions. Users should have received emails with codes they can redeem until June 30th for 2-month Beats trials. MOG’s API has now shut down, and any favorites users selected on MOG are now gone. MOG gave users a chance to migrate their playlists to Beats but that option has expired. Users can contact MOG support for a chance to get them transitioned.

One question looking forward is how many of the 250,000 Beats subscribers that CEO Jimmy Iovine says Beats has actually came from MOG? If it’s a significant amount and many of them are still on a free trial, it could mean Beats’ ability to attract fresh, paying subscribers isn’t as strong as it might appear.

With MOG and Beats now owned by Apple, other streaming music services could become juicier acquisition targets for tech giants like Google, Facebook, Amazon, Microsoft, and Samsung. Rdio is praised for its design chops but hasn’t been able to sustain rapid growth. Spotify is doing well with 10 million paid subscribers and 40 million total listeners, but has raised over $500 million making it a pricey buy. European startup Deezer, which has over 5 million paid subscribers and 12 million listeners, could be another potential acquisition.

With any luck, the competition between music services will spur price wars, product innovation, and specialization. There are plenty of ears out there, and each pair is tickled by something a little different.

Update 2:45pm PST: Founder David Hyman provided TechCrunch with this ulogy for MOG: “I’m incredibly proud of the team and our accomplishments. We raised the bar and significantly contributed to ushering in the new wave of streaming music.”