Online dating startup Loveflutter soft-launched in New York and the UK early last year with a site that aimed to match prospective dates based on shared interests. So far, so like nearly every legacy dating service. But what made the UK company potentially stand out — ignoring the silly launch campaign that required users to pass an ‘interesting’ test before signing up — was its use of Google-owned Freebase, the open database of people, places and things that powered the interest-graph behind Loveflutter’s match-making capability.

Harnessing the same underlying “semantic” technology, Loveflutter is rebooting somewhat today with a mobile-first approach aiming to be a more “quirky” Tinder. Or, more accurately, with a dating app that, along with interest-based matchmaking, asks you to present a quirky fact about yourself in an attempt to lead with something other than your photo. 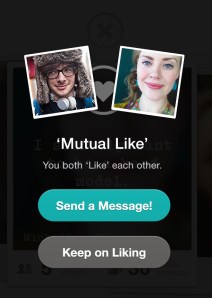 Despite Loveflutter’s iOS app using the now popular Tinder modus operandi — swipe up to “Pass,” swipe down to “Like” — and requiring a reciprocal match to proceed, it shuns Tinder’s photo-centric approach to browsing profiles. Instead, the first thing you see when swiping through potential matches is their 140 character or less “Quirky Fact.” It then requires a long-press on the profile holder’s blurred-out photo to reveal the person behind the “fact.”

On how bootstrapped Loveflutter compares to the much better funded and IAC-owned Tinder, co-founder David Standen says: “We admire the simplicity of Tinder but in arguably over-gamifying things, they’ve missed some crucial steps needed to help people get on actual dates. By focusing simply on looks you’re risking a date with awkward silence, we’ve all been there! Loveflutter’s focus on two types of attraction, reading an interesting fact first before revealing a photo, gives you an insight into personality before looks.”

Another key differentiator is the way Loveflutter doesn’t just help you find a potential match, but, should you begin messaging your prospective date, will prompt you with suggestions of where to actually meet. It does this by making use of data from location-based search app Foursquare and its own interest graph, removing some of the hassle and awkwardness of not only asking the person out, but also picking somewhere to go or something to do.

“Tinder offers no functionality beyond the messaging stage once you’ve been matched, leaving you to work your magic alone,” adds Smith. “This part of the user journey, the path to organising a date between two people, is an untouched space in terms of functionality and it’s here where ‘Suggest-a-Date’ comes into it’s own.”

Bootstrapped or not, Loveflutter has a London-based team of seven and has partered with Crab Creative to develop its iOS app, while also working with advertising/PR agency Havas Worldwide, and student marketing experts BAM UK, to help attract users. As any startup playing in the online dating app space knows, user acquisition (and retention) is key; such is the nature of a very competitive and crowded industry. The company also counts early Twitter investor Jeff Pulver as an adviser.