Aggregated data from sites like Google and Twitter have given researchers new ways to track things ranging from diseases to emergency responses after a disaster. But those are situations that usually take hours, if not days, to develop. Now Stanford researchers are using tweets to add potentially life-saving information to ShakeMaps, which are created by the U.S. Geological Survey (USGS) Earthquake Hazards Program to track earthquakes, in almost real-time.

ShakeMaps are first produced using recordings, a ground motion prediction equation, and geological data from the site of the earthquake. Then witness accounts (called “did you feel it?” data) collected by online surveys are used to supplement that information.

Researchers Mahalia Miller, Lynne Burks, and Reza Zadeh say that data from Twitter is a potentially valuable addition to ShakeMaps because it “is a service that enables everyone to create and share ideas and information instantly,” and many of its 255 million active users are in regions that are prone to earthquakes, including parts of the U.S., Japan, Indonesia, Mexico, and the Philippines. In fact, the USGS is also currently looking at how tweets can be used for rapid earthquake detection.

This is especially important for people in earthquake-prone areas, who need to know immediately if they have to prepare for aftershocks or related events like tsunamis.

Miller, Burks, and Zadeh looked at all geo-tagged tweets with the words “earthquake” or “tsunami” in several languages written within the first 10 minutes after Japanese earthquakes at magnitudes of 6 or more from 2011 to 2012. They found “that counts of geo-tagged tweets at different radii around a particular site are good predictors of shaking intensity when used in combination with earthquake-based features such as VS30 [a global map server] and source-to-site distance.” 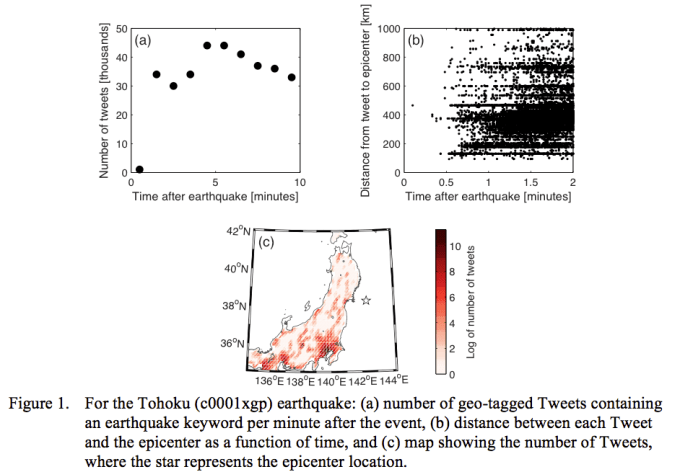 This is a valuable tool for first responders because other data sources, including inspections by engineers, measurements from recording stations that are not connected to the Internet, and online surveys, are often not ready before decisions about rescue and recovery operations need to be made. Using Twitter to help estimate the size of an impacted area can have “significant potential for regions that may not have an extensive network of existing earthquake recording stations but have many active Twitter users,” Miller, Burks, and Zadeh added.

For more information, check out the paper here, which will be presented at the National Conference On Earthquake Engineering in July.