I have so many pastimes that I like to say that my hobby is hobbies. I knit, scrapbook, build miniature dioramas, go on long walks, and take many cat photos that I then spend hours editing in VSCO. Unfortunately, I often let my craft supplies sit idle for weeks while I spend hours surfing the web and adding to my 97 Pinterest boards.

This is unfortunate because hobbies have been shown to be a highly effective form of stress management, but sometimes it’s hard to find the motivation to do even something I enjoy when the Internet and Netflix beckons. That’s why I was intrigued by the concept behind iOS app OptimizeMe, an app that lets you record the amount of time you spend on various activities and then draws correlations between them, your other activities, and your mood.

When OptimizeMe (not to be confused with an unrelated service called Optimize Me) was first launched in January, I found it cumbersome and difficult to use, especially since I had to log 14 days of activities before I got to see any correlations. Developer Bogdan Gerya has been receptive to user feedback, however, and the latest version of the app only requires seven days of logging.

Gerya came up with the idea for the app while making New Year’s resolutions. To motivate himself, Gerya created a Excel spreadsheet and used it to collect data about his daily activities from various apps and other sources. Then he started playing around with the data, looking for correlations between what he did and his sense of well-being. OptimizeMe competes in the same space as other life-logging and mood tracking apps, but Gerya says his bootstrapped app goes a step beyond by providing data interpretation in a way that’s much more simple than his spreadsheet.

“Most of the time we know pretty well what are the right things to do, like walking 10,000 steps a day or getting enough sleep. But for many of us it takes an activity tracker like Moves to actually change the behavior. OptimizeMe just brings this to the next level by helping you to discover your personal improvement levers. Taking daily steps as an example, it may show the positive correlation between them and your mood, quality of sleep and the time you spend with your best friends,” Gerya told me in an email.

“Or it may also tell you, that your mood correlates negatively with your time spent with your boyfriend. It’s easier to motivate yourself to do the right things if you know the implications.”

The app splits your activities into four main sections: health, creativity, routine, and pleasure. Each one has such a wide range of activities that it can be overwhelming, so I decided to pick two from each to focus on. For health, I focused on logging the amount of time I spend sleeping and how much I walked (OptimizeMe integrates with Moves). For creativity, I picked photography and journaling (you can add your own activities). I track breakfast and cleaning in routine, and reading and get togethers in pleasure.

For every activity, you can either set a timer or go back and log the amount of time you spent on it. You can also rate things like how delicious your breakfast was or what mood each activity put you in. 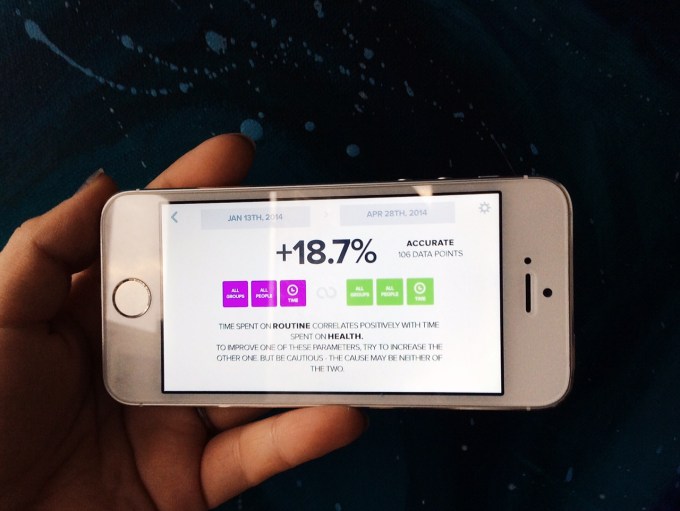 By the end of a week, I got several interesting data points in OptimizeMe’s “correlations” section. The amount of time I spend eating breakfast and cleaning the house correlated positively with my health goals, which is unsurprising because if I’m motivated enough to organize my apartment, I’m also more keen on exercising and keeping a regular sleep schedule. But I found other correlations more surprising. As an extremely introverted person, I often dread get togethers, even with people I like a lot, because I think of group gatherings as an energy drain. But the app told me that the more time I spend with other people, the better my mood is, and the more motivated I am to do other things (like clean).

Unfortunately, my approach to using OptimizeMe (logging only a few activities instead of everything I do) means that the data I get back is relatively limited. For example, I often don’t see correlations because there isn’t enough data. On the other hand, its line and bar chart generators show me at a glance when I’ve been slacking off in certain areas.

OptimizeMe also has a feature named “Ari,” a character that looks a little bit like EVE from “Wall-E.” Ari tells you when you’ve been neglecting certain activities. I find him a little annoying, but at the same time the feature is gentle push to get off my smartphone and do something offline. OptimizeMe is more complicated to use than most life-logging or mood tracking apps, but since I’ve started using its data correlations and chart give me, I’ve started spending more time on my hobbies and goals.

Updates to the app have included a basic period tracker after several female users asked for one. Gerya is very responsive to use feedback, so I look forward to future versions of OptimizeMe, which you can download here.