Bitcoin, which has recently traded under $400 and over $500, shed more than 10% of its value over the past few days, falling from around $500 to under $440, before recovering slightly.

As has happened many times in recent months when it comes to Bitcoin price swings, this downturn is based in news from China. This time around, BTC China has decided to stop accepting local-currency deposits from China Merchants Bank, a large financial institution in the country.

Why does Chinese usage of Bitcoin matter? It’s widely thought that Bitcoin could have a large future in the country, where government control over banking and the like might make the decentralized cryptocurrency quite attractive to the average person. If the Chinese government exerts enough pressure to all but ban its use, that potential is undercut, harming the value of Bitcoin itself.

Via ZeroHedge, here’s a chart of the drop in the price (USD) of Bitcoin following the news: 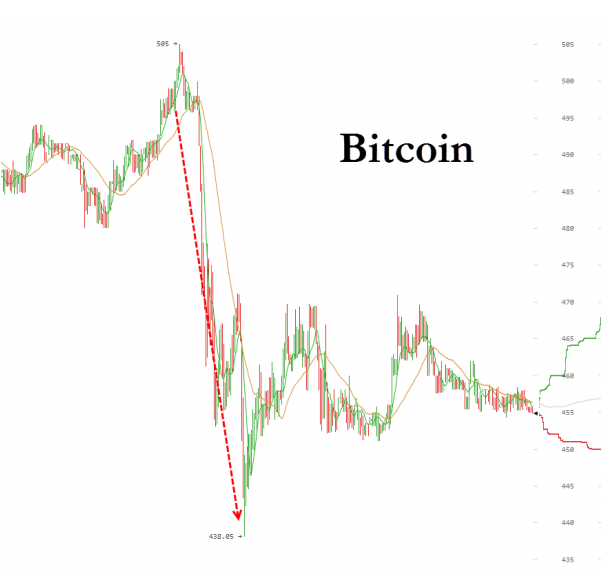 ZeroHedge goes on to note that given a lack of new official rules to force the change in policy, it could be that “this ‘pre-emptive’ move may suggest he PBOC would soon set stricter rules about how its earlier edicts should be followed.” We’ll have to see.

Also potentially weighing on the price of Bitcoin might be recent news that the French government does intend to tax transactions of the currency. As you’ll certainly recall, the United States has decided to treat Bitcoin as property, and not a currency. That choice has tax implications here as well.

All told, the above represent continued growing pains of Bitcoin — each government will have to decide for itself how it will deal with the stuff. The United States and France seem content to wait and see, while China could take more restrictive steps.