Microsoft’s $7.2 billion acquisition of Nokia’s devices and services business has been completed. Nokia confirmed the completed transaction in a press release, noting that it has “completed the sale of substantially all of its Devices & Services business to Microsoft” (using the same phrasing it has deployed throughout the process).

Nokia said it expects the final price-tag to be “slightly higher” than the original figure of €5.44 billion given when the deal was announced last September due to the transaction being “subject to potential purchase price adjustments”:

The estimate of the adjustments made for net working capital and cash earnings was slightly positive for Nokia, and we currently expect the total transaction price to be slightly higher than the earlier-announced transaction price of EUR 5.44 billion after the final adjustments are made based on the verified closing balance sheet.

Another adjustment is to the terms, with Nokia’s manufacturing facilities in Chennai in India and Masan in Korea not transferring to Microsoft. Nokia has been facing ongoing tax proceedings in India which was presumably holding up the deal — hence the workaround, with Nokia noting that it has entered into a service agreement with Microsoft to produce mobile devices for Microsoft. (Some small irony there then, that Nokia is not technically getting out of mobile-making altogether.)

The release notes that the Korean facility will be closed by Nokia, with the loss of 200 jobs. But Nokia said it plans to extend “elements” of its Bridge Program — which elsewhere gives support to employees who leave the company to set up their own businesses — to staff in Chennai and Masan.

Amid the uncertainty for our employees in Chennai and because of the planned closure of our facility in Masan, Nokia plans to offer a program of support, including financial assistance which would give our employees the chance to explore opportunities outside Nokia starting from a sound financial base. The company plans to bring to Chennai and Masan elements of its Bridge program, which we have made available for employees affected by company changes in other sites.

The transaction’s closing had been delayed slightly by regulatory hold ups (and presumably also the ongoing Indian factory-related tax affair). The two companies had originally said they expected the deal to close in Q1– but last month bumped that time-frame up to April, saying they were still pending approvals in certain markets.

The deal got the green light in China earlier this month, although the Chinese Ministry of Commerce did have some concerns about how Microsoft’s patent licensing practices might change post-acquisition. And required the company to agree to a list of patent-related commitments to grant approval.

Commenting on the completion of the transaction in a statement today Tom Gibbons, Microsoft corporate vice president who is responsible for the Nokia integration, said the advantages it will bring are greater intimacy between the two entities — which have of course been publicly working together on Windows Phones since their 2011 ‘strategic partnership’ announcement — and greater efficiency.

“Customers should see a bunch of great end-to-end experiences that really empower them to have very enjoyable, very comprehensive solutions to things that they want to get done, whether you’re talking about smartphones or feature phones,” Gibbons added. “The feature phone product family coming to Microsoft will start to have more of the Microsoft services shipped on those phones right out of the gate.”

Specifically Microsoft summed up what it’s getting as follows:

With the deal closed, Microsoft acquires Nokia’s smartphone and mobile phone businesses, its design team, most of its manufacturing and assembly facilities and operations, and sales and marketing support…The acquisition also brings key capabilities around supply chain, distribution, operational processes and systems and skill in managing hardware margins to Microsoft. The unified company will benefit from speedier execution and best-in-class business operations.

It will be interesting to see what Microsoft does with the Nokia X family of smartphones, which are built atop the Android Open Source Project — and sit between Nokia’s feature phones and the full-fat Windows Phone Lumia devices.

Gibbons’ comments about pushing Microsoft services on “feature phones” is opaque on the question of what Microsoft does with Nokia X devices — and whether new CEO, Satya Nadella (pictured below with former Nokia CEO Stephen Elop, who’s now been brought back into the Redmond fold), is willing to give Nokia’s “Lumia feeder” strategy some breathing room (or not). 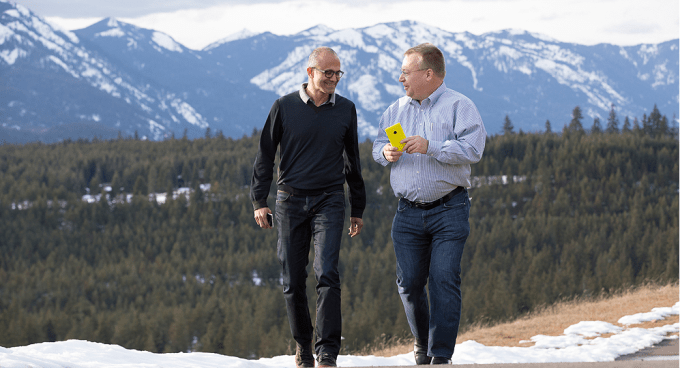