GitHub published a short blog post today detailing the results of its investigation over allegations of harassment lodged against the company by its now-former employee Julie Ann Horvath.

According to the company, the “investigation found no evidence to support the claims against Tom and his wife of sexual or gender-based harassment or retaliation, or of a sexist or hostile work environment.” However, the company acknowledges that the investigation did uncover “evidence of mistakes and errors of judgement.” GitHub co-founder Tom Preston-Werner, party to many of Hoervath’s statments, has resigned.

GitHub issued a blanket denial regarding “the remaining allegations,” stating that the investigation found “no evidence of gender-based discrimination, harassment, retaliation, or abuse.”

Horvath’s original comments about the co-founder following her departure were sharp. As TechCrunch reported at the time:

According to Horvath, the founder accused her of threatening his wife, who she had not interacted with or contacted since the wife asked her out to drinks. Horvath cried during the episode, as she said the founder both “chastised” her and called her a “liar.” Horvath said the founder ended the meeting by saying that it was “bad judgement” to date coworkers (referring to her relationship, which was with another employee at GitHub) and then left. Horvath recalls sitting there after his departure both “crying and shaking uncontrollably.”

Preston-Werner also published a blog post today admitting to “mistakes” but firmly denying that he behaved in a way that was biased due to gender:

First, I want to address the serious accusations that were made against me and my family over the past month. With every decision I made at GitHub and in every interaction I had with employees, I tried to treat people better than they expected and to resolve conflict with empathy. Despite that, I’ve made mistakes, and I am deeply sorry to anyone who was hurt by those mistakes. It devastates me to know that I missed the mark, and I will strive to do better, every day.

That said, I want to be very clear about one thing: neither my wife, Theresa, nor I have ever engaged in gender-based harassment or discrimination. The results of GitHub’s independent investigation unequivocally confirm this and we are prepared to fight any further false claims on this matter to the full extent of the law. I believe in diversity and equality for all people in all professions, especially the tech sector. It’s immensely important to me and I will continue to do my very best to further that belief.

Preston-Werner expressed an interest “immersive computing,” hinting at where he might work next.

GitHub is instituting new controls and procedures to better provide “an inclusive work environment,” including training and “employee-led initiatives.”

Following the release of both posts, Horvath released a set of tweets constituting a rebuttal of the published notes. At the time of writing, Horvath has not replied to TechCrunch’s request for comment. Here are her tweets concerning the recent developments: 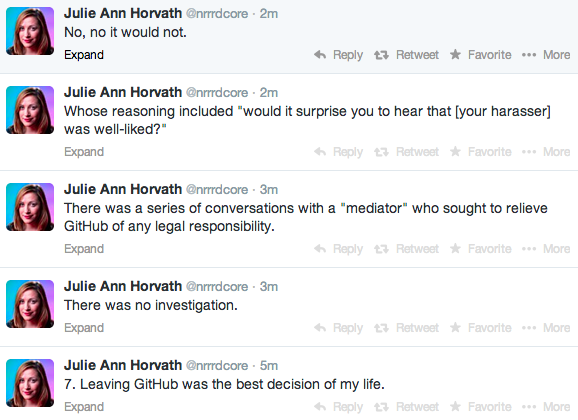 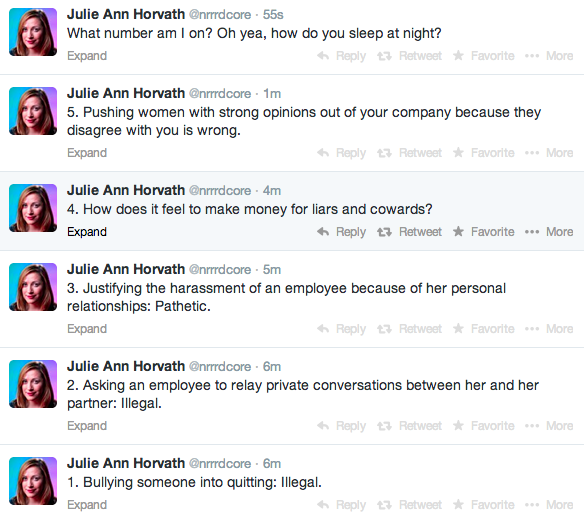 Update: Horvath responded to TechCrunch’s request for comment. Here is her response to the day’s events:

Tom had no other choice but to resign. There was substantial evidence of his and his wife’s harassment and that they both exploited company resources to witch hunt myself and other women at the company.

If Tom had not stepped down, GitHub would be bleeding good employees by now. Although, I’m not sure it won’t start at this point. It’s clear the investigation was all smoke and mirrors. It will be interesting to see what happens next, and how GitHub communicates the effects of its actions here in the future.