You decide it’s high time you got yourself fit. You take out a gym membership as a way of commitment and enthusiastically attend a few times. Sooner or later, however, gym apathy begins to kick in. You skip a week. Then two. Suddenly you aren’t going to the gym very often. Or at all. Before long it’s time to renew. “This time it will be different,” you say, guilt stricken and carrying a few extra pounds. And, like the sucker you are, you part with your cash and the cycle starts over again.

Enter: Sportsetter, an iPhone app launched in New York and Helsinki today, that wants to help break this pattern by letting you subscribe to and discover new fitness experiences matched to your personal preference, fitness goals and locality. Variety is the spice of life, after all, and by mixing up and trying out new kinds of fitness experiences — anything from a traditional gym, fitness classes, indoor rock climbing to yoga — the app is designed to beat gym apathy and send fitness experience providers new and qualified leads. It turns out that in places like New York there is a high density of different kinds of offerings but, in a very fragmented industry and one that still operates predominantly offline, it’s harder than it might be to discover these experiences. 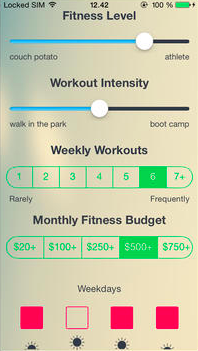 Today’s iOS launch also sees the company re-boot somewhat with a change of strategy that sees it go mobile-first — the app relies heavily on location to match you to local venues and also uses your smartphone to display your fitness experience “passes” — and puts the emphasis on a subscription model where you get a set number of passes per-month, starting at $9.99 for two.

Those passes are usually heavily discounted compared to the normal cost if you were to book with the provider direct, but Sportsetter’s founders — Trevor Ferguson and Niko Karstikko, who both studied at the University of South Carolina — tell me the startup’s model is liked by the 335 or so service providers that have signed on because it doesn’t suffer the fly-by-night traffic that something like Groupon sends, and, likewise, doesn’t reveal the price difference since, to the end user, all Sportsetter passes are equal.

One aspect of the app that feels a little limiting is that, as the model stands, you can only try out a specific experience once, meaning that Sportsetter is currently focused on sending providers new leads and helping you sample new types of fitness activities and/or new providers. If, for example, you discovered a local indoor rock climbing venue and wanted to go again, you would have to take out a membership directly with the provider.

This is something Ferguson and Karstikko tell me they are working on, but currently gives lie to the ‘Spotify for fitness’ comparison made in some of the app’s early media coverage. Sportsetter would be like Spotify is you could only listen to a particular track once.

That said, the startup has plans to add the ability to purchase recurring passes to specific experiences and providers, but its founders say they wanted to ensure the app did one thing and did it well at launch.

Other planned additions include beefing up Sportsetter’s social features so that you can not only discover experiences by seeing what activities your friends have checked in to, but also find new fitness buddies who are interested in the same kinds of fitness experiences as you. It all comes back to Sportsetter’s matchmaking functionality based on your personalised fitness preferences and goal, which Ferguson and Karstikko believe sets the app apart from competitors.

Along with the iOS launch, Sportsetter is announcing new funding: €200,000 from Northern Europe-based Reaktor Polte Tech Fund. This brings total funding for the Helsinki/New York-based startup to €805,000, having previously raised investment from various angels and grants.