An aging rock band closes out its set with a triumphant howl and pyrotechnics, and is rewarded by the pathetic applause of a couple dozen guys in hoodies. That could have described any of a dozen overwrought tech parties I’ve attended over the past few years since moving to San Francisco, but instead it’s the opening scene to Mike Judge’s Silicon Valley.

Welcome to a magical land where a few ineffectual, socially awkward engineers are hoping to change the world with their high-performance lossless media compression algorithm. Where everyone — whether it be your doctor or BevMo cashier — has a startup idea to pitch. And where founders become pawns in an epic pissing match between a couple of tech billionaires.

Before we get into what Silicon Valley is, though, let’s first talk about what it’s not — specifically, that it’s not a satirical takedown or a documentary-style exposé of the tech ecosystem.

Some of the characters are clearly based on real, identifiable people. As others have pointed out, it’s easy to see a little bit of Peter Thiel in the libertarian angel investor Peter Gregory, and it’s not a stretch to imagine Hooli CEO Gavin Belson being based on enterprise software magnate and philanthropist Marc Benioff.

The Hooli campus — which is decked out in primary colors, is home to every snack imaginable, and is populated by brogrammers — clearly evokes the Googleplex. And the so-called “incubator” where members of the Pied Piper team live is reminiscent of the notorious “Chez JJ” hacker hostels.

And, over the course of the season, you’ll see cameos from folks like Google Chairman Eric Schmidt, Re/code reporter Kara Swisher, and TechCrunch founder Michael Arrington and alumnus Jason Kincaid.

But that’s where most of the similarities between the real Silicon Valley and Mike Judge’s version end. The ideas behind the show might be based in fact, but the characters and situations are little more than caricatures on screen.

For the sake of its audience, that’s probably a good thing. 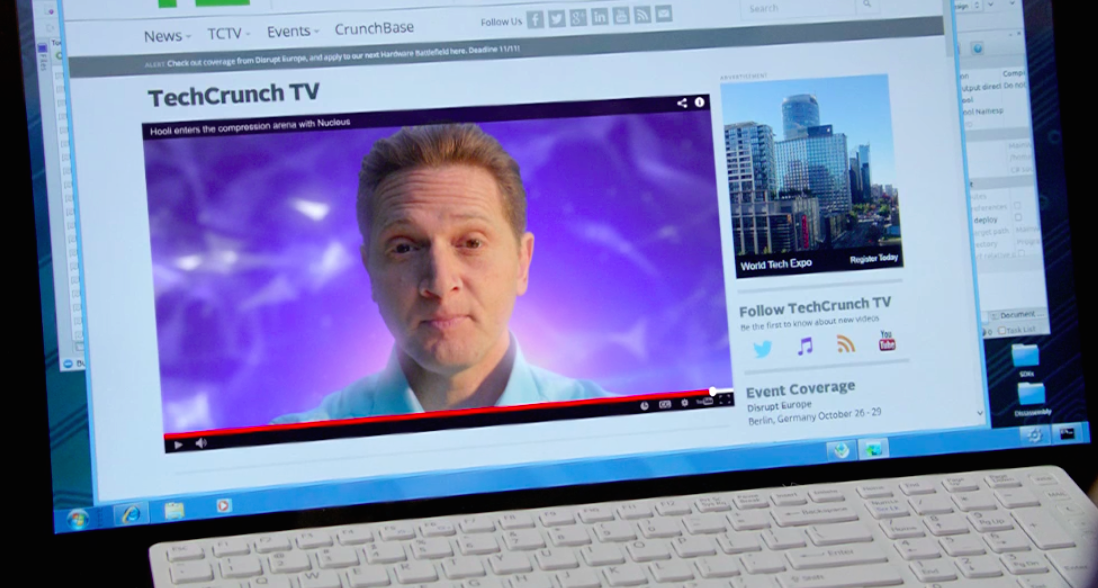 The Silicon Valley story follows the exploits of a group of engineers who decide to strike out on their own with some compression code that Hooli employee Richard created in his spare time. He recruits hacker housemates Big Head (Josh Brener), Dinesh (Kumail Nanjiani), Guilfoyle (Martin Starr), and Erlich Bachman (T.J. Miller) to help him. Along the way, he finds himself in the middle of a battle between billionaires Peter Gregory (Christopher Evan Welch) and Gavin Belson (Matt Ross).

Judge and his team of writers went to great pains to get Silicon Valley right: They visited various startups and incubators, and even spent time backstage at TechCrunch Disrupt SF last year, seeing how the event’s Startup Battlefield works. (That bit eventually made it into the show, as we’ve previously reported.)

But for all the work Judge has done to make Silicon Valley seem authentic, the wit and charm of the show comes not from the minute details that it gets right, but the ways in which it makes things seem larger than life.

This is the same guy who made Office Space and Idiocracy, after all, and so comedy comes from inevitable glitches in technology — one of the biggest laughs of the first five episodes comes from a malfunctioning hologram machine.

There’s no shortage of dick and race and immigrant jokes to go around, which, considering all the hand-wringing around diversity and inclusion in today’s startup ecosystem, may be a bit overdone. The lack of women in Judge’s Silicon Valley is also a serious flaw, and if the show gets renewed, Judge & co. might want to “change the ratio.”

And while brogrammers and wantrepreneurs surely exist in the real Silicon Valley, they are seemingly everywhere in Judge’s universe.

Some early reviews of the show have criticized it for the cartoonish nature of some of the characters and situations, even drawing fire from none other than Tesla and SpaceX founder Elon Musk. At a premiere party in Redwood City that featured the cast, crew, various HBO execs, and reporters like me. Musk criticized the show for its lack of authenticity, according to Re/code.

But that all seems besides the point. Judge is writing comedy, after all, and good comedy often comes not from a detailed and comprehensive study of a subject’s character, but in his foibles and ruffles around the edges.

Sure, I don’t know any startup founders as ineffectual as Richard or anybody running an incubator who is as hilariously bombastic as Ehrlich (although Dave McClure comes close). It’s difficult to imagine a billionaire as brilliant as Peter Gregory also being so socially awkward.

And, let’s face it, real startup engineers probably don’t spend nearly as much time arguing with each other as Guilfoyle and Dinesh do. (Or at least, if they did, their startup wouldn’t last very long.)

But we’re not judging the characters on how “real” they are, we’re judging them on whether or not they make us laugh.

(And if we’re really going to go down that path, you could probably level the same complaint of character single-mindedness or lack of dimension against the “girls” of HBO’s Girls or the women of Sex And The City.)

Anyway, it’s the eccentricities of the characters that makes this show funny, and the way that certain character traits rub up against one another — for instance, in the way Ehrlich seeks to be Steve Jobs to Richard’s Steve Wozniak, or a pivotal scene in which Gregory and Belson meet. But the humor is not mean-spirited, and you never feel like Judge is mocking them.

The same could be said for the way Silicon Valley, the region, is portrayed. It’s a place where conspicuous displays of wealth — whether that’s Kid Rock playing a concert for a disinterested audience or a startup founders attending a toga party for one of their investors — are rightly called out for being ridiculous.

Yes, these events actually happen, although perhaps not with the regularity that the show suggests. I’ve attended a fair number of parties packed with startup folks feigning interest as a big-name performer from twenty years ago rocked out on stage.

The set pieces are also pretty true to life: I’ve seen everything from the giant corporate campuses of tech titans like Hooli to the weird live-work arrangements that startups like Pied Piper have tried to implement. Neither of which surprises me these days.

But no one really cares about that. The big question is, “Is it funny?”

On that front, it’s a definitive yes. As someone who covers startups, I think the tech nerds will appreciate the thoughtfulness and nuance that went into re-imagining Silicon Valley for Mike Judge’s world. But for those who aren’t programmers or VCs, there are plenty of laughs not tied to cultural in-jokes.

So in conclusion: The first episode of Silicon Valley premieres April 6 at 10:00 pm. You should watch it.