Games will almost certainly lead the way on emerging platforms like the Oculus Rift.

But a Palo Alto-based startup named Jaunt is making the bet that consumers will also want immersive, film-like experiences on devices like the Rift and Morpheus.

They’re building a set of hardware and software tools around computational photography that will enable filmmakers to create cinematic experiences for the Rift and other VR headsets. They’ve just raised $6.8 million in funding from investors, including Redpoint Ventures, Peter Gotcher, Blake Krikorian, SV Angel and British Sky Broadcasting (Sky).

The company built a special, spherical camera with 32 lenses (pictured below). They can leave it stationary at different locations like in a Los Gatos park where they filmed several Shaolin monks fighting for a demo. 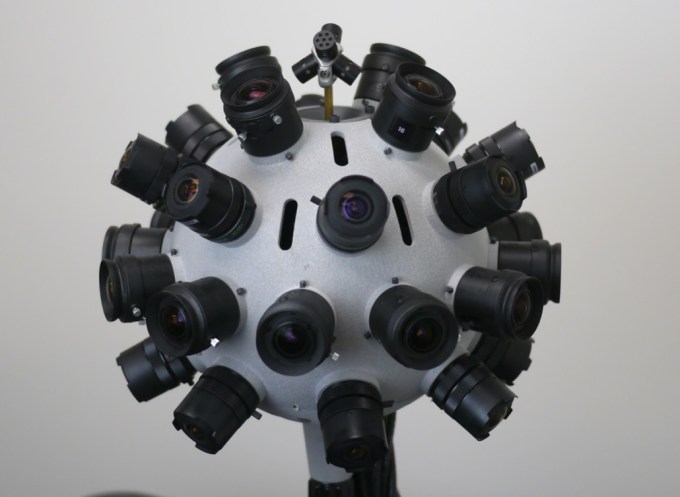 “This camera was entirely built in our VC’s office,” said Arthur van Hoff, the company’s chief technology officer. “We basically ordered the parts on Amazon, used off-the-shelf tools and put it together. We showed the results to our VCs and without even doing a PowerPoint presentation, it was very compelling. There was this sense of teleportation.”

On top of that, they’ve built the post-production, editing and rendering software to take all of that video recording from the dozens of individuals lenses and recompose them back into something that’s viewable on the Rift.

For now, they’re just going public with the funding and company concept, and don’t have any immediate plans to sell hardware or software.

“We’re a studio for VR and we do end-to-end solutions,” van Hoff said. “If you’re a creative in Hollywood that is interested in VR production, we want to find you.”

The team, which previously sold Ellerdale to Flipboard, put together an experienced group of advisers and investors. Peter Gotcher, one of the investors, is the chairman of Dolby, while Stuart Murphy, another director on the board, heads entertainment at Sky, which is a major television channel in the U.K.

Other advisers include one of the creators of Google Glass, Babak Parviz, and Brad Wechsler, the chairman of IMAX.

The entire virtual reality space got a huge boost over the last month with Sony announcing its own effort in Morpheus and, of course, Facebook’s $2 billion deal to buy Oculus. A few other teams are experimenting with virtual reality films like Condition One, which released a trailer for a film on the Rift recently.