Western Digital brags that its My Cloud product and service will allow owners to “Save everything. Access anywhere”. Except when the service is down. Which it has been for almost a week. 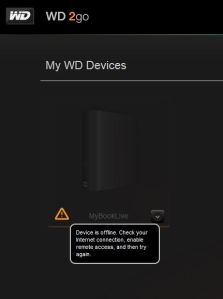 Outages happen. Even Google goes down. The company’s lack of communication and transparency is troubling, though.

On the day the service started acting up, the Western Digital twitter account was tweeting about some WD party. The company’s response is buried in the official forum site, rather than being pinned to the top of the boards or released in other channels. There’s not a hint of communication on WD.com that one of the company’s newest products has been having crippling issues for nearly a week.

Generally, when a cloud service goes down, the company responds, notifying customers as quickly as possible that a fix is in the works. When Dropbox crashed last May, the company quickly took to Twitter and even posted a message on its home page. Google, Microsoft and Amazon all have pages showing the status of its cloud services and often takes to Twitter with more information. Western Digital apparently tweets about a party when its services crash. Stay classy, WD.