Alibaba‘s upcoming public listing is expected to be one of the largest IPOs ever, but there are concerns that the Chinese e-commerce giant’s rapid growth is tapering off as merchant spending slows and competition increases.

But Alibaba still deserves its $150 billion valuation and may be worth signficantly more, according to a new report from research firm YipitData, which tracks every transaction on Alibaba’s marketplaces.

But YipitData says that Tmall, one of Alibaba’s largest marketplaces, can potentially double its revenue by raising its sales commission in certain categories to be in-line with other e-commerce companies including JD.com, which recently formed an important strategic partnership with Tencent, one of Alibaba’s main competitors.

Tmall lets companies, including Apple, Nike, and Procter & Gamble, sell products directly to consumers and is one of Alibaba’s most valuable properties. In 2012, the combined transaction volume of Tmall and Taobao, Alibaba’s consumer-to-consumer marketplace, was more than one trillion yuan ($162 billion), surpassing the 2012 totals for Amazon and eBay combined.

Tmall, which currently has more than 90,000 stores, monetizes through sales commissions, called “take rates,” which range from 0.5% to 5% depending on product category.

The marketplace charges much lower sales commissions than its rivals and, according to YipitData’s research, Alibaba has recently launched growth initiatives that appear to be focused on categories with the most room to increase take rates.

As the chart below shows, Tmall currently charges a 5% take rate in categories where it holds a larger market share, or more than 30%.

YipitData says that if Tmall succeeds in growing categories in which it holds a lower market share, then it may be able to increase their take rates from 2% to 5%, boosting Tmall’s average sales commission.

Categories with the most growth potential include 3C (cameras, computers, and cellphones) and appliances. Alibaba’s initiatives for 3C, which currently holds a 27% market share, include “Electric City,” a set of shopping guarantees meant to make it more competitive with JD.com, the market leader in this category. If “Electric City” succeeds in bringing in more customers, Tmall has the opportunity to raise its current 2% commission on 3C purchases to 6%, which is the sales commission that JD.com charges.

In appliances, Tmall also falls behind JD.com, which has a 63% market share in that category thanks in large part to its logistics network and delivery guarantees. In order to compete with JD.com, Tmall invested $360 million last December in a joint venture with consumer electronics and appliance company Haier. The deal gives Tmall access to Haier’s 17,000 service points across China, compared to JD.com’s 1,453 distribution stations. In addition, Alibaba also signed a three-year partnership with appliance manufacturer Midea for a line of smart appliances that launched last week and will be sold exclusively on Tmall.

Other Tmall categories Alibaba is focused on growing include food, in which it currently charges a take rate of 2% and Tmall Global, a dedicated marketplace for international brands. Take rates in the latter category vary from 2% to 4%, leaving plenty of room for increases. 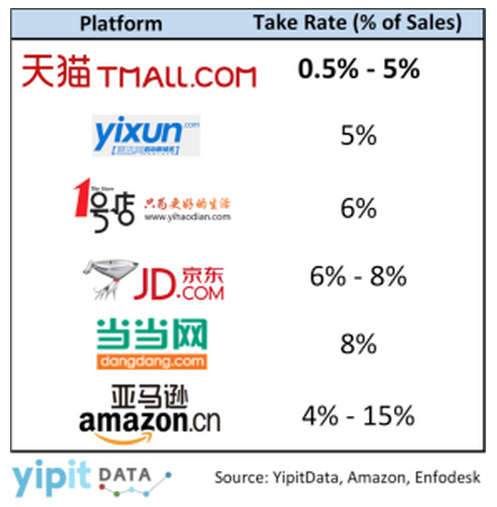 Tmall’s take rates are actually lower than competitors, as shown in the chart to the right, so an increase is unlikely to scare off vendors, especially if Alibaba’s growth initiatives result in more sales.