A new report about the state of iOS usage in China from mobile analytics firm Mixpanel reveals a lot of interesting info about how one of Apple’s most important international markets is adopting its mobile OS. The good news is that iOS usage overall is rising quickly, especially over the past year – but that increase in usage isn’t necessarily coming from the sale of brand new hardware.

The iPhone 5s and 5c launched in China in September last year, for the first time simultaneous with the North American launch. Mixpanel saw a considerable uptick in iOS usage in the country begin at that time, but the most growth came from the iPhone 5, not the newer devices. This is likely because the 5 became a lot cheaper as soon as new hardware was made official, which is backed up by the fact that once again, when China Mobile unveiled its iPhone 5s and 5c launch in January of this year, there was a growth spike attributable mostly to the iPhone 5.

Mixpanel says the takeaway is that Apple manages to increase interest in its platform overall with launches in China, and not necessarily to the device(s) which are actually new to the launch itself. But it could also suggest that price sensitivity in these markets is a very real concern, and one that might result in a lot of new device sales if Apple actually ventured into the lower cost device market (the iPhone 5c, while spun by some as that, actually didn’t drive Apple’s usual pricing down compared to past launches).

The traffic- and engagement-tracking startup also analyzed usage distribution in China, and found that iOS devices were used over a large portion of the country, with over 40 percent of its data coming from 783 cities. Major metropolitan areas understandably generated the most usage, which Mixpanel says is due to network coverage as well as average income. 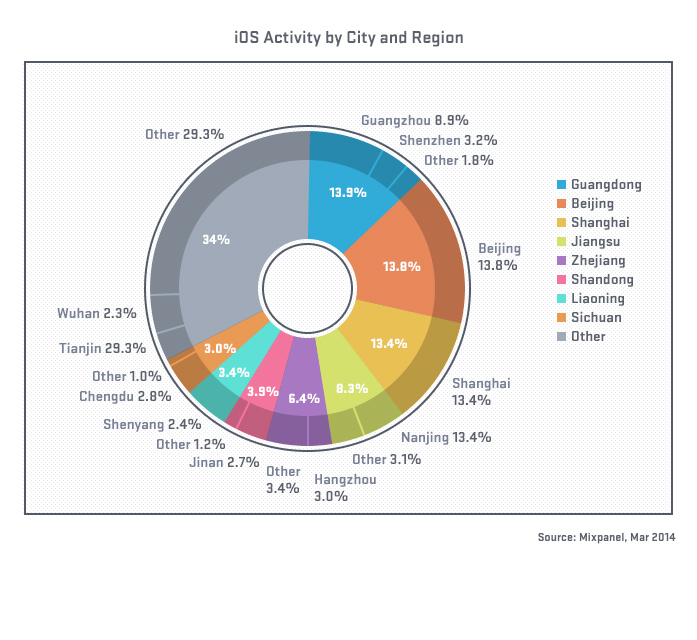 What’s interesting is that high GDP isn’t strictly tied to greater usage – Tianjin has the highest GDP in the region, but only sends 2.5 percent of China’s iOS data through Mixpanel’s product, for instance. Nor does population tie directly to higher use; Shanghai and Beijing are neck and neck in population and iOS usage, but Guangdong (which has three times the population and houses Shenzen) has almost the same iOS usage, pointing once again to income as a moderating factor.

For more about this unique look behind the curtain at iOS activity in China, check out Mixpanel’s full blog post detailing the report.