In hopes of luring in fresh audiences, Facebook Paper announced its first experiment in working with an outside group to populate the Ideas section of its stylized content reader standalone app. The “Ideas Worth Spreading” conference TED will feed exclusive content from its 2014 summit in Vancouver into Paper from March 17th to 21st. Collaborations like this could turn niche communities into loyal Paper users.

Facebook explains “Over the course of this week, the Ideas section will feature posts, photos and presentations from TED fellows, posts from other TED attendees, TED blog posts, TED talk videos and posts from public figures — like journalists and others — who attend or cover the conference. Much of this content will be exclusive to Facebook and Paper.”

As for future team-ups, Facebook says “We’re looking forward to seeing how people respond to this experiment, and then we’ll consider doing other section takeovers in the future.” It seems a natural fit for the Ideas section, which normally focuses on a different intellectual subject each day like International Women’s Day, the State of the Union address, and South by Southwest.

Paper launched February 3rd to give people a reimagined way to read their Facebook News Feed and newspaper-esque content sections on their iPhones. While the design has been lauded as beautiful and progressive, the quality and especially the timeliness of articles in news sections like Headlines (world news) and Tech have felt subpar. The source outlets chosen for different stories seems a bit haphazard, and in the evenings the articles can be many hours old. That makes Paper feel downright sluggish compared to Twitter’s real-time feed. 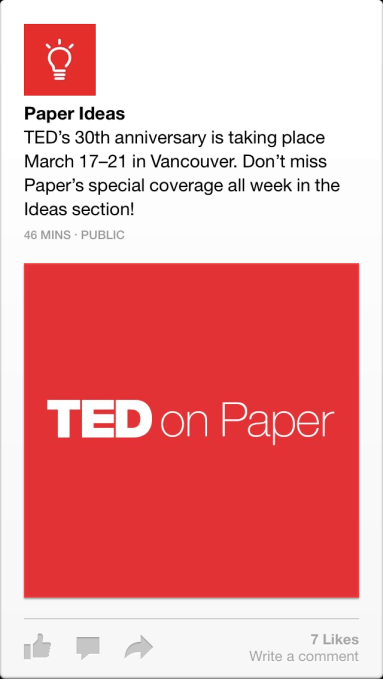 While it’s a relatively full-featured substitute for Facebook’s main app, it feels so forward-thinking that it’s a little intimidating, and I find myself falling back to the standard Facebook mobile experience. Paper isn’t focused on growth yet, but its foreign nature may be why I haven’t seen or heard of a ton of people using it after the initial launch hoopla.

Content collaborations could address both of these issues. Handing off some aspects of curation to another team like that of TED could pump fresh blood into sections. These teams may be inspired to keep their takeover more frequently updated. Exclusive content could meanwhile attract diehard followers of a particular topic to Paper. Facebook likely hopes they’ll stick with Paper after the takeover ends.