Not many people come to SXSW Interactive to talk about an app they plan to launch but then proceed to give almost no detail and not even a name. Which is why it was all the more intriguing to hear Justin Cooke, CEO of Innovate 7, wax lyrical about his new project at the Decoded Fashion session.

The former TopShop CMO and Burberry marketer helped launch those brands’ digital initiatives, but late last year he left to form Innovate7, a sort of half agency, half product company.

It’s an unusual combination, but Cooke has pulled in a team of unnamed former staffers drawn from Apple, Facebook, Red Bull and Nike to help brands innovate their businesses. 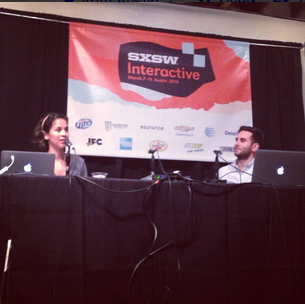 However, that’s not all they’ll be doing. Cooke plans to launch an iPhone application that – he claims – will be capable of challenging the top five social networks.

This is an enormously big claim. However, whatever the case, he’s already raised funding from investors, the names of which remain undisclosed, and is talking extremely bullishly about this product.

And the product he declined to name?

Well, as Cooke explained to the assembled crowd, the app will be “about creating intuitive emotional experiences” and has been in development for 2 years.

He also claims the app, at launch, will be featured on home page of App Store, and be used by celebrities and musicians like Will.I.Am from day one. Indeed, the artist appears to be backing back this story, enigmatically tweeting recently that he would soon launch one of his biggest projects to date

It was hard to work out what Cooke was driving at, but it sounds like a photo sharing app like Instagram which is also using sensors on the iPhone to augment the whole experience.

Cooke said the app “triggers a feeling related to a memory” and is built on “data around emotion. We think data will be beautified,” he said.

Either you’ll find this kind of talk intriguing, or – perhaps more likely – infuriating. But Cooke is supremely confident.

He’s even gone so far as to state (in previous press interviews): “I want to be the next Steve Jobs or Mark Zuckerberg, Britain never had one so why not me.”

Why not, I guess, though Cooke’s credentials are so far drawn mostly from the fashion world, not technology.

Whatever happens, TechCrunch will be following up to the check these claims, once the app is out, reportedly in a couple of weeks or so.