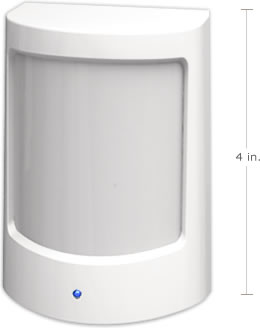 With competitors like Canary and Nest coming quickly behind, Simplisafe, a small, Boston-based security company, is pulling out the stops. After updating their software and mobile interface late last year they’ve updated their hardware and added a glass break sensor, one of the least expensive in the industry, to their arsenal of hardware.

The sensors, which look like small motion sensors common on standard security systems, can pick up shattering from up to thirty feet away. They will usually tune out other extraneous noise but if you stick them in the kitchen you may get a few false positives if you’re prone to dropping your mugs.

In addition to the new sensor, the system offers wireless connectivity to cellphones through a simple app and will notify you and the police if the alarm goes off. The system is ideal for renters who may not want to wire up their security systems or poke holes in wallboard. Instead, you simply stick the keypads and sensors around the house and drop the base station – which looks like a small white cone – in an out-of-the-way spot.

Home automation is growing by leaps and bounds and it’s getting far easier to horn in on entrenched markets like security, HVAC, and environmental sensing. While it may cut into the bottom lines of those dudes who come by the house offering to sell you a Brink’s system for $200 a month, it definitely makes it easier to build an intelligent living space for not much cash.