There’s a rush on to be the first Android console maker to strike the right chord with consumers, and there’s no shortage of contenders. Bluestacks is one such contender, and their GamePop is finally ready to ship to consumers. It’s a unique take, packing 500 top Android games into the console pre-loaded and ready to go, all for $6.99 per month. But can it avoid the pitfalls of other Android consoles out there and rise to the top?

The GamePop looks nothing like its original concept designs, which came in two forms: a standard, cube-like GamePop and a GamePop Mini with a more minimalist look. The final version is much closer to the GamePop Mini, with a small candy-bar type design that plugs into USB for power, and HDMI to connect to your TV, with a special dongle for communicating with the controller unit.

The construction of the console and the controller is composed entirely of a high-gloss, none too impressive plastic, but the console itself has a decent form factor since you can hide it away behind your TV without adding much to the visual clutter of your home entertainment setup.

As for the controller, it boldly calls itself “the finest game controller ever designed for enjoying the most popular games and apps on TV” on the packaging, but that’s far from the truth. It’s designed to be a remote control, that fits ergonomically in the hand when used vertically, but that is also oddly lopsided when used horizontally – as you would for the bulk of your gaming needs.

It also has just a D-pad and XYAB buttons (in addition to buttons for touch input, settings, home, and help) and works as a gesture controller for controlling touch-based input on the Android-powered console. But it’s extremely limited vs. competing controllers, including Bluetooth ones made for Android devices, and something like the Nvidia Shield handheld game console, because it lacks shoulder buttons and joysticks.

That might be fine for casual gamers, but it’s not going to fly with anyone who wants to play something more in-depth, and the controller itself isn’t ergonomically pleasant to use no matter what your level of interest in video games. Once again, it has that plasticky feel, and there’s no substance or weight to it, either. Plus, the pointer-style touch input leaves a lot to be desired, but I’ll discuss that more in the ‘Performance’ section below. Suffice it to say, this controller isn’t going to win any awards for being essentially a first-gen Wii remote in a less pleasing shell.

The GamePop is designed to offer all-you-can-eat gaming without nickle-and-diming users, on a Netflix style model that provides a rotating library of software so users never get bored, but also get to experience the best that mobile gaming has to offer. There are some benefits, and a few problems to this approach vs. those taken by GamePop competitors.

The main advantage is that you can get started right away, without having to find and download software first. You just navigate through the GamePop’s home screen, which organizes apps by category, popularity and just in a straightforward and comprehensive list. You can also search for your favorites with virtual keyboard input.

The downside of this is that while there’s a lot to choose from, it doesn’t feel terribly well curated. Software selection seems to have been made based on what’s most popular, not what makes the most sense for a living room console gaming experience. So while playing Jetpack Joyride on a big screen with a simple hardware controller seems to make a lot of sense (albeit with noticeable lag between button press and on-screen reaction), other titles like Candy Crush Saga and Fruit Ninja aren’t necessarily as natural a fit for the GamePop’s control scheme.

Other problems arose, too, including titles displaying a “No connection” message to the Play store when selected, which presumably means they were taken down from Google’s Android software marketplace but not removed from the GamePop library. It’s probably something that’s easy enough to iron out, but not a terrific look for first impressions.

The GamePop does its job admirably well, in that it runs an interface that makes sense for TVs and does indeed present Android software on the big screen, in a reasonably effective manner. But like other Android consoles before it, it ultimately won’t light any fires under the major console competitors, and the experience lacks enough polish that it’s hard to see any consumer becoming a regular, devoted user of the service.

Another major hit for GamePop’s performance score is the way the virtual pointer works. Far from being one-to-one, it’s relative, so that when you hit the edge of your TV screen and keep moving the controller, it resets the basic positioning, meaning you have to reset it again by going back to the other side to get some semblance of ‘point where you want the pointer to go’ control back. A button on the controller acts as a finger press in tandem with the pointer, which is a clumsy way to enact touch-based input on a home console. This makes it frustrating to play anything like Fruit Ninja. 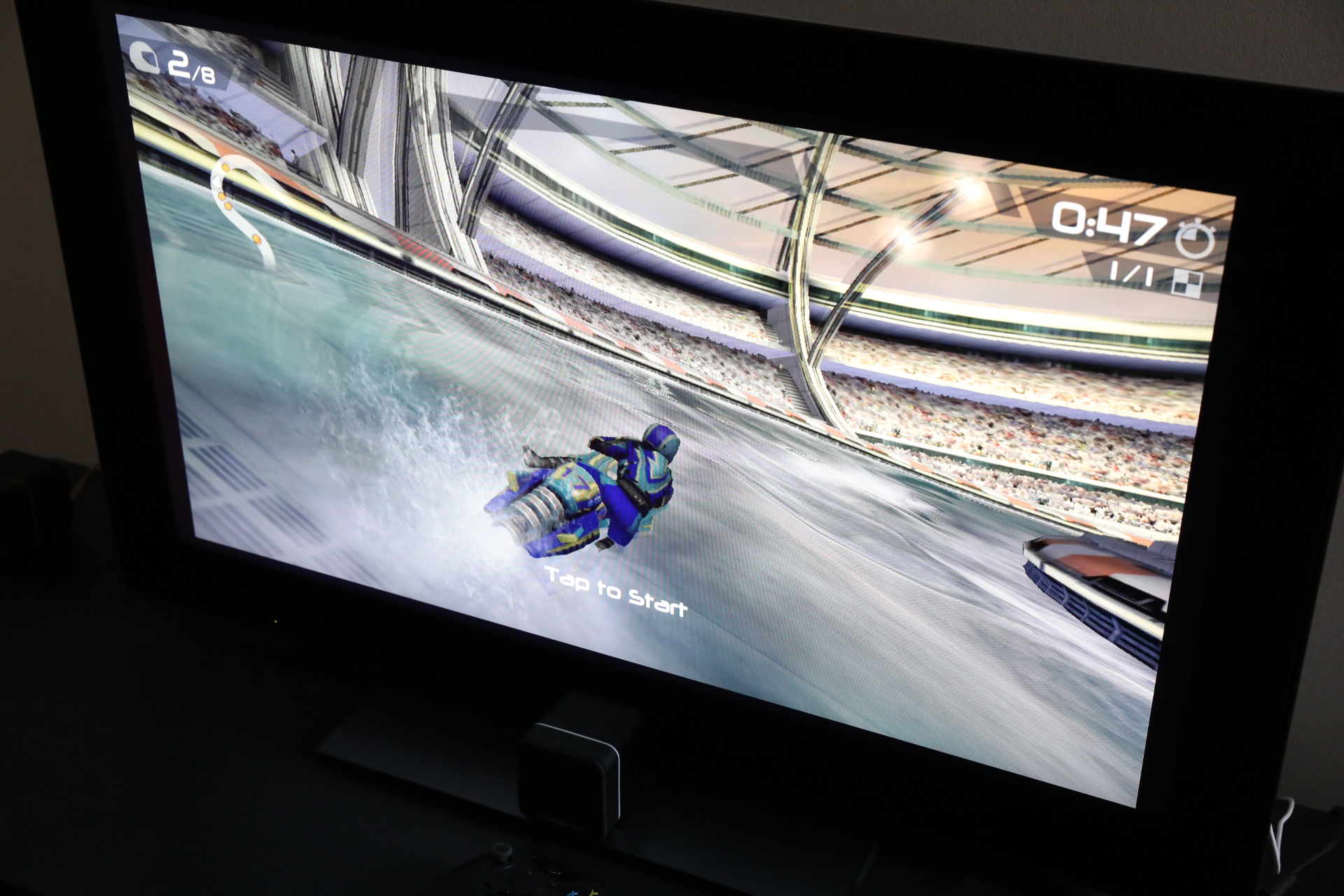 GamePop works best when input is kept simple, using the D-Pad and buttons only. There’s also tilt control, which works decently in games like Riptide GP, but it’s still not something that’s so rewarding as to merit a desire to revisit that control paradigm over and over again.

The GamePop was revealed with a fair amount of hype, and at a time when there was much more optimism about Android consoles and how they might work with consumers. Now, nearly a year later, the hardware is here and it’s striking much the same note as its competitors, which is to say a sour one.

Bluestacks seems to have realized that targeting consumers directly isn’t the right strategy to pursue, however, and has rethought its distribution model entirely: The new GamePop won’t only be sold direct to shoppers (pre-orders should still be delivered to those who made them, according to the company), but will instead be marketed as a gray label product to cable companies, giving them something they can use to sell their bundled cable and Internet services to users. In that context, I can kind of see GamePop working in a limited fashion, especially if it refines the bugs in user experience it currently has and refines the controller hardware. Similarly, it wouldn’t surprise me if I checked into a hotel room in the next couple of years and found this setup attached to my TV as part of the in-room entertainment package.

A recent Verge article posited that the indie game console may already be dead, and after playing with the GamePop for a while, I tend to agree. If you’re after an Android console that can hook up to your TV and offer genuine enjoyment, look to the Nvidia Shield – it’s still far and away the best execution of this concept. As for the GamePop, don’t lament the fact that its shift in strategy includes looking around for options other than direct consumer sales (which continue for now), since you’re probably better off.