In the late 1960s, the British Ministry of Technology turned Bedford SB buses into mobile cinemas that toured the country and screened films promoting modern production techniques. Half a century later, a Singapore-based startup called Next Billion is reviving the concept to reach rural communities throughout Southeast Asia.

Called Mobile Movies, the project, which is supported by Microsoft and Unilever, was developed for use by companies and non-profit organizations that want to collect research data in places that have limited Internet or phone connections.

The project has two main parts. First, it brings content ranging from kung-fu movies to educational shorts about health and nutrition to rural areas for free screenings. Then agents, who are hired from within each community, survey audience members on behalf of Mobile Movies’ clients.

Data is collected using customized mobile devices and software developed with Microsoft. Since phone and Internet connections in rural areas are often unstable, movies and data are stored and transported on microSD cards.

Based on the success of its Vietnam pilot and earlier projects, Mobile Movies creator Loring Harkness and Gilbert believe it will be able to train 20,000 agents by 2015 who will eventually reach 75 million people. 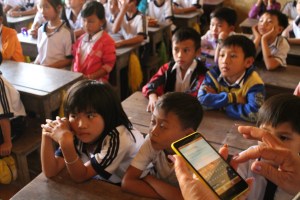 “In a country like Myanmar, there is at the moment extremely limited telephone and Internet access. Tens of millions of people are off-the-grid,” says project manager Oliver Gilbert.

“The government or international aid agencies can use our data collection platform. For example, if we have 1,000 agents in Myanmar and each surveys health facilities and doctors in their community about what they need, then in one to two weeks we can create a visual map of what the health needs of those rural areas are.”

While Unilever makes a wide range of consumer goods, Gilbert is careful to note that Mobile Movies will not support anything it thinks will have a negative impact, like sugary drinks, tobacco products, or skin-whitening creams.

So far, Mobile Movies has been used to market products like mosquito nets, nutritional supplements, and anti-bacterial soap. In addition to Microsoft and Unilever, Mobile Movies’ current partners include FrieslandCampina Dutch Lady 20+, and Mindshare.

“We work with local NGO partners to make sure that all of the content is appropriate and desirable. We maintain very strict standards for what we’re willing to show,” says Gilbert. “We only want to market and demonstrate products that provide positive effects.”

Offering incentives to attract survey participants is not a new idea, of course, but Gilbert says Mobile Movies’ screenings are more financially sustainable than handing out perks like cash or free coffee.

Mobile Movies and agents work together to discuss what movies will be shown in each community.

“We show kung-fu movies in Vietnam and Myanmar, as well as local sports content, cartoons, and programs for children,” says Gilbert. “We provide content that’s suitable for all audiences, complemented by educational content.”

Each Mobile Movies kit includes a projector with an external battery pack that allows it to run for multiple presentations without recharging; external speakers that can serve audiences of up to 100 people; and Nokia Lumia smartphones loaded with data collection apps that Mobile Movies developed with Microsoft.

Gilbert says that Mobile Movies presents an entrepreneurial opportunity for its agents, who are screened by local NGOs. Kits are sold to agents and available through microfinance loans. Agents are also paid a wage that Mobile Movies says is two to three times higher than average local salaries.

Its network of agents allows the project to conduct frequent surveys in rural areas and collect data in real-time, instead of sending a researcher just a few times a year. Having a member of the community ask questions also makes it much easier to do research on sensitive issues like reproductive health issues.

“Our agents are hired in communities and stay there, which not only engages the community much better, but also builds two-way relationships,” says Gilbert.