Yes, this startup is banking on dead tree media being around for a while yet. Long enough for it to build a business that bridges the gap between paper-based media and the digital world, anyway.

How does Peekster work? It’s built an app that lets smartphone users scan the headline (or a paragraph of text) of an article they are reading in a paper publication and match it to a database of digital articles from the same publication.

The app then retrieves the digital version of the article — enabling the Peekster user to share it with their social networks, or save the article to a read-later service like Pocket, or carry on reading it then and there on their phone.

Peekster’s scanning system isn’t flawless; clearly if an online sub-editor has changed a print headline for SEO-boosting purposes (for instance) the app is not necessarily going to be able to locate the right story. But the algorithm does try to find close/similar matches as well as exact matches, to spread its net a little wider: 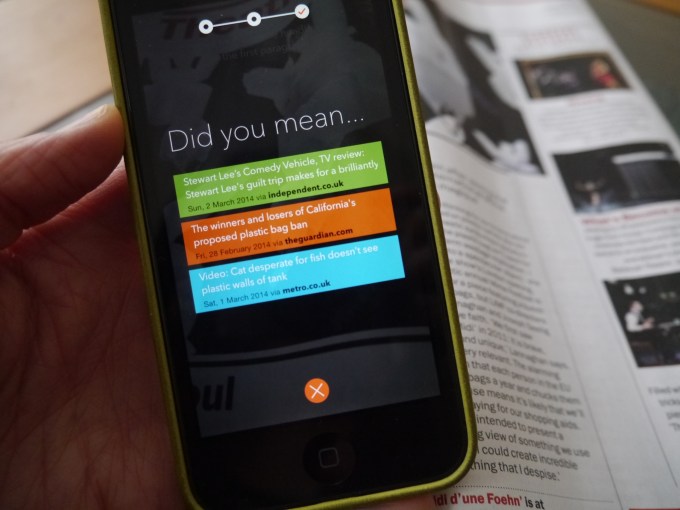 Articles Peekster users have scanned (or ‘tagged’ in the app’s nomenclature) also appear in a saved list within the app for keeping tabs on stuff you’ve liked offline. Plus popular tags from the community of Peekster users can be browsed to surface articles others think worth sharing.

How does Peekster work exactly? Its technology is doing optical character recognition of the newsprint, as seen through the phone’s lens, to determine what those inky words spell out and therefore which story in the publication’s digital database the offline reader is eyeing up.

Think of it as a Shazam for print.

Peekster launched its first iOS app back in November but has now give the app its first big update, with a new design/interface and a new revenue stream to expand the monetisation options.

The basic Peekster app is freemium and ad-supported, offering a limited number of saved tags. Or the user can upgrade to unlimited tags via an in-app purchase to a pro version that also adds some additional features (such as offline mode, and Evernote read-later integration).

The ultimate aim of Peekster’s makers is to build an online marketplace for individual articles — allowing readers to cherry-pick and pay for articles from a range of publications, rather than just buying a single offline (or online) publication.

It’s not there yet though, with its current focus being on sharing not buying individual articles, and only a handful of U.K. newspapers are supported by its system so far (namely: The Times, Independent, Metro, The Guardian, the London Evening Standard and City AM — not all of whom are official clients of Peekster).

But it tells TechCrunch its app framework is “ready to run on some U.S. titles”, and it will be adding some U.S. publications “soon”. No names as yet. It has also started looking for investment to boost and spread the range of supported newspapers and countries.

As well as ad revenues (and in-app upgrades to the paid version), Peekster has introduced a third revenue stream via a promoted articles feature that allows publishers to pay to inject particular articles into the list of popular tags that Peekster users see  within their app.

The article with the red border is the promoted article in the below example: 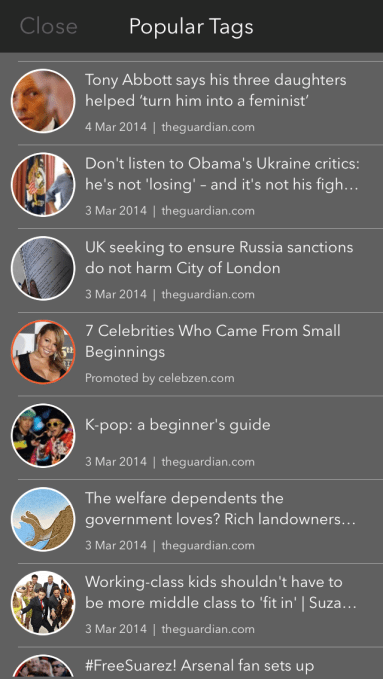