Since the very beginnings of electronic communication, we were warned about the light-speed cultural wasteland we were stringing together. When Henry David Thoreau first heard about the telegraph, he surmised, “We are in great haste to construct a magnetic telegraph from Maine to Texas; but Maine and Texas, it may be, have nothing important to communicate.”

He lamented that the first thing transmitted would probably be celebrity drivel, referencing Princess Mary Adelaide, a sort of 19th century, Kardashian-esque gossip-magnet: “Perchance the first news that will leak through into the broad flapping American ear will be that Princess Adelaide has the whooping cough.”

Now, for some math nerdiness, we can’t quite say that One Ellen retweet in 2014 is equivalent to One Obama retweet in 2012. Twitter use has been growing (albeit at a pace that’s making investors sweat). Here’s their growth over the past 2 years: 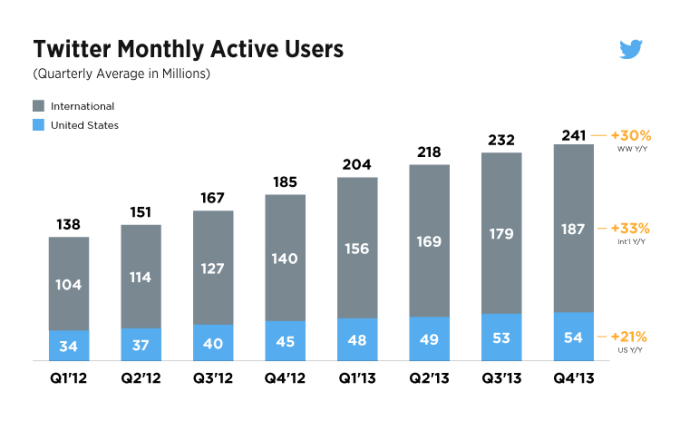 Twitter has approximately 30% more users since Obama’s epic hug was posted. On the other hand, a large fraction of Twitter users have always been spectators or bots. Additionally, celebrity love-fests are generally bi-partisan, so it’s a lot less risky to share.

Thus, while we don’t know exactly how much more popular a gaggle of sexy celebrities are than the most powerful man in the free world, we can confidently say that they’re a lot more fun to talk about–mathematically speaking.

As I’ve written about before, technology hasn’t had a wonderful impact on the substantiveness of our political conversations. Presidential debates used to be deeply nuanced and many hours long. Then radio and TV came along and bludgeoned substance with a soundbite assault to the death.

On the other hand, sometimes entertainment is a tempting fishhook to bring the politically disinterested into the national conversation. Buzzfeed, for instance, is on its way to becoming a media empire, betting that serious politics and mindless celebrity lists can live side-by-side. Indeed, Buzzfeed editor Ben Smith explained it best when he told me:

“I think anybody who’s worked in the news business, at least since I think the Second World War, realizes that entertainment is more popular and more widely consumed than politics,” he argued. “I think probably more people were talking about Marilyn Monroe than about Dwight Eisenhower on any given day in the ’50s, too. I think that’s kind of the banal truth.”