Cal, the smart calendar app that integrates with to-do list maker Any.do, has launched a new feature called HeadsUp that helps you manage meetings and appointments. It is currently available for Cal on Android and will be available on iOS in the near future.

Any.do has gained kudos (and $3.5 million in funding) for its sleek design, as well as features that increase the app’s functionality without sacrificing simplicity. 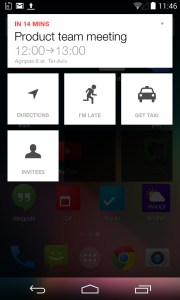 Like Any.do, Cal also packs a host of features into an intuitive interface. HeadsUp wants to make your day easier by helping you get to an appointment; take notes and create reminders while your meeting is in progress; and then compose and send meeting minutes and tasks to your group once it is over.

To use HeadsUp, first enable the feature in Cal’s settings. Then as your meeting approaches, a reminder will pop up on your screen. If you tap on it, it will show you a menu of options, including directions on Google Maps and a link that will take you to taxi-calling apps. If you are late, you notify other attendees by Skype or email. While a meeting is in progress, Cal will let you add tasks that will be synced with Any.do and take photos or record video and audio. Once a meeting is over, you can immediately send a summary email to other attendees or assign tasks to them. 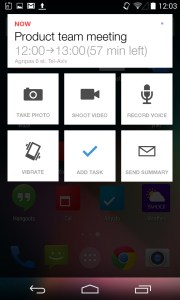 Ultimately, Cal seeks to make meetings more productive. It’s difficult for one person to blather on pointlessly when other people have Cal open and are automatically creating and sharing tasks. I think the automatic summary tool is also handy because being assigned to take meeting minutes is one of the most tedious tasks imaginable.

The simplicity of Any.do and Cal belie the amount of work that has gone into both tasks. As Any.do founder and CEO Omer Perchik told my colleague Sarah Perez last May, Any.do relies on a semantic engine that predicts what you will be interested in doing and then helps you accomplish that task by recommending other apps like Kayak, TripAdvisor, or MyFitnessPal, or automatically sending you reminders. For example, if you enter “pay taxes” as a task, it will prompt you to work on your filing every so often as April 15 approaches, even if you don’t set reminders. Cal includes similar features and with the addition of HeadsUp, continues to hold its own among other smart calendar apps like Tempo and Sunrise.