Have you ever left a movie theater just as the credits start to roll, only to find out that there was a totally-amazing-oh-my-god-you-missed-the-best-part bonus scene tacked on to the end?

It’s okay. We’ve all been there. Those sodas are huge, and those bathroom lines get stupid fast.

AfterCredits for iOS tells you at a glance whether or not you’re missing out.

The premise is pretty straightforward: every new major movie to hit theaters gets an entry, and helpful moviegoers vote on whether or not there’s any extra content during or after the credits. If the majority of people say there’s content, the app considers it truth. (Sure, there’s potential for them to get it wrong — but as long as the hivemind doesn’t collectively decide to be a jerk, the numbers should trend toward correct.) 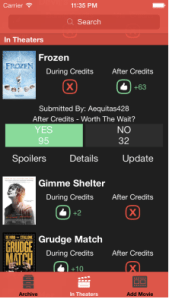 This specific app is currently iOS-only, but there’s a very, very similar app for Android called Anything After. The only downside? Anything After costs a buck, whereas the AfterCredits iOS app is free.

Of course, this does mean you’d likely be using your smartphone in a dark theater — and as someone who considers the movie theater something of a temple for entertainment, that’s sin in my book. But the credits are fair game. Half the audience is standing up and heading for the exit anyway, and the other half is already blabbing away. Once the credits are rolling, smartphone it up.

You can find AfterCredits for iOS in the App Store right here.