One of America’s favorite liberal phrases has been sent through the political spin machine and polished into a Frankenstein of sorts, thus rendering it inaccurate and far from its original intention. You might have heard that American founding father Benjamin Franklin said something like “Those who give up liberty for security deserve neither.”

The quote has been the siren song of anti-war protesters and, most recently, the banner for mass online protests against the NSA’s surveillance program. For instance, here was Reddit’s front page two days ago, when it officially joined the fight against Internet and phone spying. 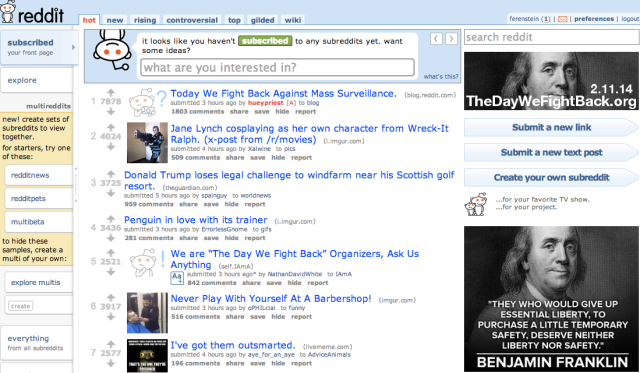 As the Brookings Institute’s Benjamin Wittes observes, “Very few people who quote these words, however, have any idea where they come from or what Franklin was really saying when he wrote them.”

Despite its many (many) variations, this is the actual quote:

Those who would give up essential Liberty, to purchase a little temporary Safety, deserve neither Liberty nor Safety.

According to Wittes, the words appear in a letter widely presumed to be written by Franklin in 1755 on behalf of the Pennsylvania Assembly to the colonial governor. “The letter was a salvo in a power struggle between the governor and the assembly over funding for security on the frontier, one in which the assembly wished to tax the lands of the Penn family,” he explains.

The letter wasn’t about liberty but about taxes and the ability to “raise money for defense against French and Indian attacks. The governor kept vetoing the assembly’s efforts at the behest of the family, which had appointed him.”

Indeed, if you look at the text surrounding the famous quote, it’s pretty clearly about money: “Our assemblies have of late had so many supply bill, and of such different kinds, rejected, on various pretences,” wrote Franklin.

There’s not much on liberty, as we understand the concept, in the entire letter.

How Did It Get Butchered? To Google Ngram!

As we can see from the two chart above, Franklin’s quote didn’t mean much for 150 years after it was uttered, then had a solid and steady uptick around the later half of the 20th century, when fear of big brother began to mount (the top chart represents the frequency of the quote in books from 1750-present, the bottom from 1950-present).

In the few 19th-century books the quote does appear in, it doesn’t appear to be taken out of context, such as in the 1865 epic retelling of “The Life Of Joseph Warren,” where it is quoted in full with delicious servings of context.

But 19th-century authors weren’t always so committed to fidelity of the quote itself. In 1851, in a History of All Nations, the author wrote it in more of the modern form, “they who can give up liberty to obtain a little temporary safety, deserve neither liberty nor safety.”

It wasn’t until the turn of the century did the butchering for ideological purposes begin. For instance, it was taken out of context in a book that is one of the closest things libertarians have to a bible, Frederick Hyak’s Road To Serfdom (1944), where Franklin’s quote concludes a chapter on the magnificence of the free market.

The banner anti-security quotes continue throughout the century in government reports on limited government and early apocalyptic warnings about the security state.

Misquoting folks isn’t new. It arises from the need to push an idea rather than investigate truth; it’s no shocker, then, that campaigns and ideological works have been the culprits of butchering Franklin’s words.

There’s even an academic term for the strategy, explains Matthew McGlone of the University of Texas at Austin — “contextomy.”

“‘Contextomy’ refers to the selective excerpting of words from their original linguistic context in a way that distorts the source’s intended meaning, a practice commonly referred to as ‘quoting out of context’. Contextomy is employed in contemporary mass media to promote products, defame public figures and misappropriate rhetoric. A contextomized quotation not only prompts audiences to form a false impression of the source’s intentions, but can contaminate subsequent interpretation of the quote when it is restored to its original context. …”

Image by Flickr user Michael H Parker under a CC by 2.0 license